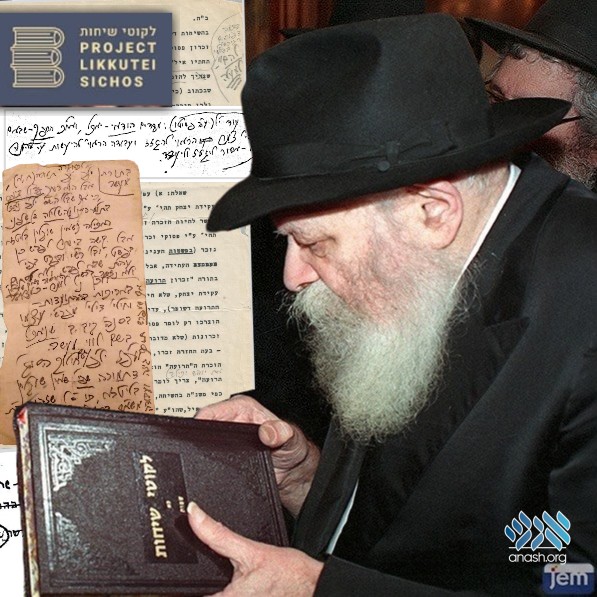 For years, these pages were sought after, and the discovery of each one was deemed a cause for celebration. Now, these precious handwritten edits are published on a frequent basis, available to all.

For years, these pages were sought after, and the discovery of each one was deemed a cause for celebration. Now, these precious handwritten edits are published on a frequent basis, available to all.

The backstory of the Rebbe‘s Likkutei Sichos is almost as fascinating as the sichos themselves. Each “likkut” was prepared by a team, called manichim, who would choose a sicha from a previous year, which would then be rewritten and adapted to the style of Likkutei Sichos.

Frequently, the manichim would have questions on the sichos, which they would write down and send in to the Rebbe. When they received the response, they would incorporate the answer into the likkut they were working on.

Upon completing the weekly likkut, they would once again send it in to the Rebbe for editing. The Rebbe would spend hours each week editing the sichos, with most sichos going through at least two editing stages. The manichim would then use these edits to produce the final product, the sicha as we have it in Likkutei Sichos today.

These precious handwritten notes from the Rebbe were, for many decades, stored only in private archives, with single pages at a time being released for various teshuros and publications. Each revelation was greeted with joy, and passed around, first hand to hand, and more recently from WhatsApp to WhatsApp.

Recently however, these treasures have started being published at an incredibly fast pace. With the start of Project Likkutei Sichos, the organizers turned to Rabbi Leibel Schapiro, and others who merited to be manichim, and asked them to share the edits with the public.

Seeing the increased enthusiasm brought about by Project Likkutei Sichos in learning the Sichos, they gladly agreed to release the Rebbe’s notes to the public.

Just this week, Project Likkutei Sichos released a 8 page booklet, containing edits and responses from the Rebbe on the sichos being learned this week.

“We have been receiving amazing feedback from the frequent publication of the Rebbe’s edits,” organizers of Project Likkutei Sichos told Anash.org. “B’ezras Hashem, we intend to continue with publicizing them, among the other myriad resources offered.”

“A big thank you goes to Rabbi Schapiro, Rabbi Avrohom Gerlitzky, and the other who shared these treasures,” they say. “It in his zechus that we are able to provide these wonderful publications.”

In the coming days, a siyum will be celebrated by thousands worldwide who learned the entire Chelek Yud Beis of Likkutei Sichos. Stay tuned for details.