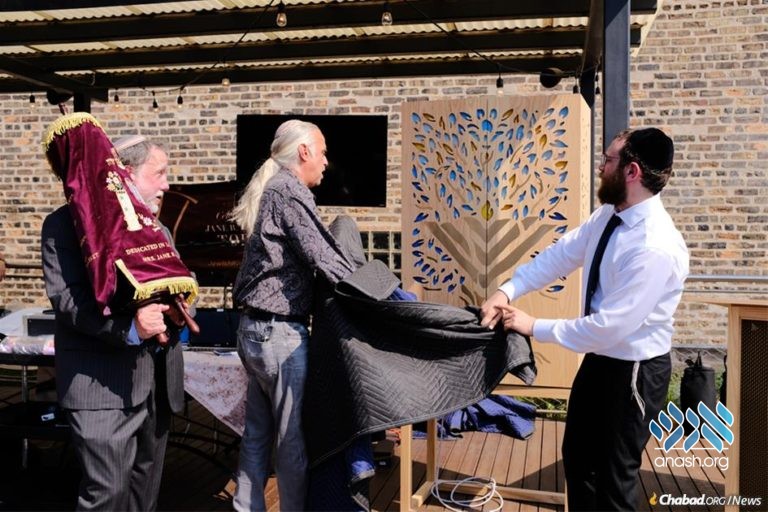 At the turn of the 20th century, there were so many factories in River North on the north bank of the Chicago River that the smoke billowing from their chimneys often blocked the sunlight. From the 1920s to the 1960s, it was known as a deserted and dangerous area of the city. Few could imagine that just a few decades later, the character of the neighborhood would have made a 180-degree turn into an upscale, hip district full of shops and galleries. Fewer still could imagine that River North would have its own thriving Jewish center.

When Rabbi Avraham and Chava Kagan established Chabad-Lubavitch of River North and Fulton Market in 2015, the district was already known as a popular and burgeoning neighborhood. It was quickly filling with hotels, retail shops, and especially the food and beverage industry. The crowd was a younger one, and the entire area was taking on a downtown-style vibe.

It was around then that the rabbi first bumped into James Geier, a local businessman and president of 555 International, a noted interior-design firm. “I have been involved in this community for many years, … and I try to assist everyone who helps build this community,” he says. “I was glad to meet this young, friendly rabbi.”

After meeting informally a few times, Kagan approached Geier when he was looking for a space to rent for his community’s annual Purim bash. Unknown to the rabbi, the venue he was eyeing was owned by Geier. “That was our first business meeting,” recalls Geier. “After getting to know the Kagans better, I quickly took a liking to them and to the mission they had set out to accomplish.”

‘Guiding Us Through the Process of Building’

River North’s opportunities also came with challenges. The high cost of real estate, along with the lack of a centralized “Jewish” area in a relatively small neighborhood, forestalled the establishment of a permanent synagogue and community center. Each holiday or function had the Kagans searching anew for a venue to rent. When approached by community member David Rosenberg, who wanted to commission a Torah scroll for Chabad of River North and Fulton Market in memory of his grandmother, Kagan knew he had a conundrum. He had to find a respectable solution for how to house the Torah, while remaining practical enough to transport it when necessary.

“I immediately thought of James,” Kagan tells Chabad.org. “I knew he was involved in concept design and custom manufacturing, which was exactly what we needed for the ark.”

Geier had been personally involved in the evolvement of the community at large, having designed many of the local restaurants. This placed him in the singular position to be able to express the uniqueness of the community as a whole, and the Chabad community in particular, in the ark that would house their new Torah.

“As soon as I mentioned the idea, he grabbed it with both hands,” says Kagan. “From that moment on, he was extremely generous with his time and his skills, guiding us through the entire process of building and designing the ark.”

As president and founder of a global design firm, such a project was not a novelty for Geier. Having designed hotels, bars, pro shops and hundreds of other projects for a wide variety of clients, he knew that the atmosphere of any environment is one that must be created.

‘Closer to My Heritage’

Although the basic concept was not unlike other projects they had worked on, Geier’s team had never worked with a synagogue before, and so it required some study. The symbolism in the design of the ark had to be in line with Jewish values—one that could eventually become the basis for the design of a permanent synagogue.

“It’s amazing what can be found on the Internet” chuckles Geier. “Working on the ark together with team member Matt Fiely, most of what we had to learn to build the ark was discovered on the web.”

The finished product did not disappoint. The front of the ark features the seven-branched menorah of the Beit Hamkdash portrayed as the Tree of Life. Roots extend from the sides of the main stem, while glowing lights shine from among the many leaves growing on the ever-living tree. By blending these two famous Jewish symbols together, the ark combined the traditional with the modern, bringing out an age-old message in a manner relevant to a younger generation.

On seeing the ark, one community member emailed Kagan expressing his deep admiration. “The design is beautiful. I see a profound message in the ark. The Tree of Life contains many leaves, each unique. This can only represent the River North Chabad, made up of so many different individuals, but all coming together to make one unified community.”

While nearby Chicago neighborhoods have seen their fair share of Torah dedications, for River North this was a historic event. Black-hatted rabbis, alongside community members and children bearing flags, danced down streets while live Chassidic music played from a specially commissioned truck.

“For me, what was most amazing was to see how much the children were involved,” said Chava Kagan. “They are the future of the Jewish nation. If just for the joy on the children’s faces, all the hard work planning the celebration was well worth it.”

“Looking back,” Geier observes, “I started the project in memory of my father, Marvin, of blessed memory. I felt there could be no better way to honor him. Indeed, it was a most worthy tribute. But what wasn’t expected was that this project actually drew me closer to my heritage. The learning, researching and designing of the ark opened for me a new dimension of spirituality that I never thought I had in me.”