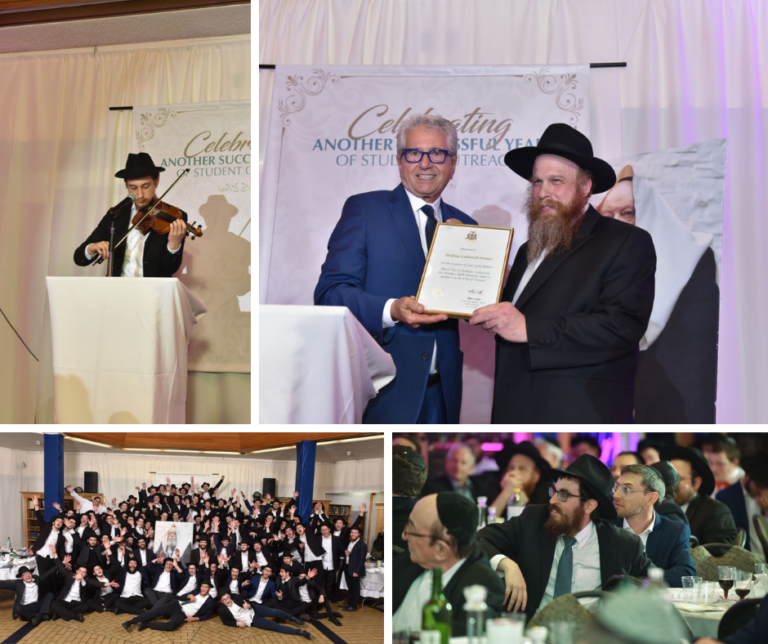 At a lavish dinner held in yeshiva and arranged by the bochurim, people shared the impact mivtzoyim had on them over the years. The yeshiva’s contribution was recognized by the Canadian government.

The bochurim, known in Toronto as the “Friday Boys,” transformed their Yeshiva to a beautiful banquet hall for a special event.

The boys of YLT visit over 1,800 Jewish businesses, stores and offices every Friday for the past twenty-two years. They have built relationships and connections that are everlasting. They do this by spending each Friday afternoon taking the bus or train across the city, just to help another Jew put on Tefillin, share some Torah, or simply to share a kind word.

The yeshiva was transformed into a stunning banquet hall, with beautiful drapes and colorful lighting. The event was put together and arranged so beautifully by Rabbi Mendy Lieberman and Menachem Wagner, and assisted by an amazing team of bochurim. Although the entire yeshiva was involved, some boys that put in particular effort were Levi Ackerman, Shalom Mintz, Yisroel Boruch Abramovitch, Shlomo Gerber, Menachem Schaffran, and Meir Simcha Minkowitz.

The evening began with hors d’oeuvres and cocktails outside of the yeshiva in a tent, along with a photo booth with the mivtzoyim logo to take photos with the guests. A mivtzoyim table was set up for those that hadn’t yet gotten the chance to put on Tefillin that day for them to put on Tefillin.

As people began taking their seats, all were entertained by the MC and the director of Chabad student outreach Rabbi Mendy Lieberman, as he introduced the first speaker, the Rosh Yeshiva Rabbi Wagner, who gave a resounding speech. The speech emphasized the importance of “lama nigara”, of yearning for growth by looking up at those with greater spiritual stature and in material matters looking to those who have less than ourselves and being satisfied with our lot. Rabbi Wagner then introduced the Toronto City Councillor Mr. Mike Colle, who on behalf of the Canadian government, presented a special plaque to the Rosh Yeshiva, expressing the Canadian government’s recognition of the yeshiva’s contribution to the Toronto community, by spreading light wherever there is darkness in the city of Toronto.

The program continued with the guests turning to the screens for a special video presentation, beautifully put together by hatomim hashliach Sender Zirkind, on how bochurim respond to all the negativity that’s going on in the world and fight its darkness. Following that, Rabbi Lieberman encouraged everyone present to take up a good resolution to further contribute light and peace to the world, while a beautiful niggun was played on violin by our professional violinist hatomim Mendel Kleinberg.

Following this, was a beautiful powerful video of testimonials of individuals on how mivtzoim had a personal impact on them, culminating with calling upon our guest speaker, a good friend of yeshiva, Mr. Phil Hart who shared his personal story and gave his thanks to the bouchrim that come to see him every Friday.

Finally, a unique highlight of the event, was hearing from Lev Yakov Voskoboynik, who is currently serving as a bochur Shliach at the Mesivta Lubavitch Toronto, as to how he was inspired by C-teen camp to further his Yiddishkeit, from being a professional Tennis player winning the Los Angeles City Championship, and succeeding at being the valedictorian of the biggest Charter Public School in the United States, to eventually open his own C-teen chapter in his local neighborhood, and leading him to join Yeshiva and now serving as a bochur shliach.

Many hachlotos were made throughout the evening. The event ended with spontaneous dancing to the lively tunes played by Mendel Kleinberg, as the men joyfully celebrated together another successful year of mivtzoim.

A big yasher–koach to all the Shluchim for all they have done for yeshiva and mivtzoyim throughout the year, and a particular Yasher Koach to Hashliach Yankel Oster for his dedication and devotion to the success of mivtzoyim week in and week out.