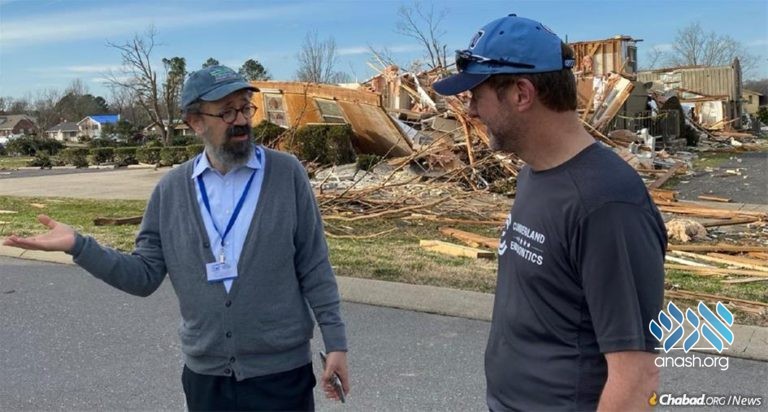 As Nashville residents began to dig out from the rubble of the tornado that killed at 24 people and hospitalized more than 150, shluchim Rabbi Yitzchok and Esther Tiechtel sprung into action.

As Nashville residents began to dig out from the rubble of the EF3 tornado that killed at least 24 people, hospitalized more than 150, and wrecked 140 structures, leaving hundreds homeless, Chabad-Lubavitch Rabbi Yitzchok and Esther Tiechtel visited with area residents, many of whom had lost everything. hundreds

In East Nashville, close to the city center, they found a bustling scene. As volunteers and utility workers cleared trees and downed power lines from roadways and distributed bottled water, the Tiechtels shared hugs, words of comfort, and food with people who had been too overwhelmed to think of eating. They found stories of survival and people surrounded with friends and support.

But in Mt. Juliet, a half-hour’s drive from downtown, the streets were largely deserted. “Even the sky seemed darker and the people were isolated and on their own,” Esther Tiechtel told Chabad.org. “Stepping gingerly over downed power lines, we trekked through the mud to find the people and tell them they were not alone.”

They came across a row of small businesses, many of them medical offices, which had been devastated by the tornado. Their proprietors assessed the damage and tried to patch up their businesses as best they could on their own.

“They were in a state of shock,” said Esther Tiechtel. “They were alone out there trying to piece together what happened. We tried to provide a human side: words of comfort, a smile, a handshake or hug.”

They met Dr. Pete Davis, an optometrist who founded Mt Juliet Family Vision in 1989. Now his 31-year-old practice had literally been torn to pieces. “He wondered aloud what he would tell his 1,000 patients,” said Yitzchok Tiechtel. “But he told us how thankful he was that his life and home were spared.”

“I’ve been on the phone with a Jewish friend, Dr. Dan Bregman, all morning, and he’s been keeping me going,” Davis told them. “And now I meet you, a Jewish rabbi.” Bregman, a close friend of the Tiechtels, is one of countless community members who have reached out to friends who were in the path of the devastating tornado.

The next step, according to Yitzchok Tiechtel, will be to set up a system to provide aid to those affected by the storm. “For most people, practically speaking, they need help with small things,” he said. “Insurance will take care of the big things, but they need help cleaning up, and gift cards to Home Depot and Walmart for essentials to get them back on their feet.”

Esther Tiechtel described the experience of a woman she met, whose home was damaged by the tornado. “They heard rumbling that sounded like a massive train, and they quickly moved to the lowest place in the home. They felt the house being lifted from its foundation and being put down again, and somehow they survived.”

Amid devastating destruction, however, they found hope. “The people we spoke to told us over and over how thankful they were to G‑d that they had survived, and how they hoped to rebuild,” said Esther Tiechtel. “There was a lot of pain, but there was also a lot of faith.”

Rabbi Yitzchok Tiechtel with a property owner in Mt Juliet.