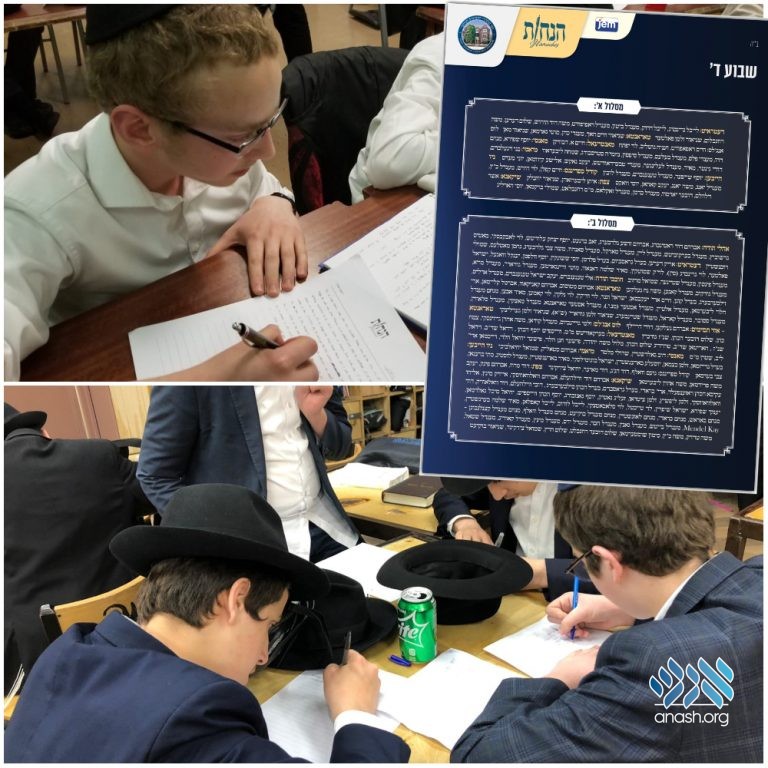 The Vaad Hatmimim and JEM announced the list of bochurim that passed week 4 of Hanachos program, from among the 200 participants from 13 yeshivos. Two top hanachos were also announced.

The Vaad Hatmimim and JEM are proud to announce the list of Bochurim that passed week 4 of the Hanachos program. This week’s Videos for Level one were each 20 minutes long and Level two were 31 minutes long.

The top Hanachos are on the  minutes video of the Rebbe from Yud Beis Tammuz Farbrangen 5745, Sicha 2:

Hanacha by Avraham Zushe Goldberg:
(The Rebbe is saying this Sicha after relating the story of when the Frierdiker Rebbe was arrested as a child.)

Just as this story teaches us a lesson in regard to the Chinuch of children, it can also teach us a lesson regarding the education of those who need it, even if they are over Bar or Bas Mitzvah. This applies to Goyim as well. At a certain age Goyim too are responsible to keep the & Mitzvos for Bnei Noach. There are lengthy Halachic discussions of when exactly that age is and if there is a set time that Goyim mature.

By humans, Jews and non-Jews alike, have a body and soul. More often than not, these two conflict. As it says in Koheles “The animal of a person brings him down, while the Neshama uplifts him.” A person’s Neshma guides him to intellectual and educational things, and the animal part of him brings him to do physical things like eating and sleeping.

The body comes first and dominates a person’s life, so naturally the neshama is a prisoner to the body. And the body is a prisoner to the world. Especially when one looks at the world and sees physicality wherever he turns. And the intricacies of the world don’t come at first glance. This challenge comes from birth. That’s why one needs Hashem’s Help. Hashem created both the body and Neshama. Therefore every person has the ability to be able to overcome his material desires.

We see changes from the time the Frierdiker Rebbe was born and from when he became Rebbe. Generally a person is born as a wild and unruly person. Yet as he grows older and his material desires grow, so does his intellect. His choices become more mature and he is able to observe the 7 Mitzvos Bnei Noach.

Especially now when we have seen an overflow in knowledge, both in worldly sciences and in Torah. This should’ve led to more personal knowledge, that the person should’ve calculated that these studies came about only that he should be able to civilize the world. And to refrain from robbery and murderer which are included in the 7 Mitzvos. Yet what do we see? Not only has the world not progressed, it seems to have gotten worse.

It used to be that the maximum one was able to cause harm to, was his city (his Daled amos.) Now with the advancement of technology, any empty, wild individual can use it to destroy the entire world. And this mentality is worsening. We see this with recent events. Who would have thought a couple of years ago that we would be seeing the terrible events of what is happening in today’s days. Different governments all disregard what the others have to say., in a way that Gemara describes what quill happen in the times before Moshiach comes.

The story teaches us that when one sighs, the darkness may make it seem that it is coming from something good. But after a closer look he sees that it is only a calf groaning. “The animal takes him downward.” He says, “If the world is so bad anyways, why can’t I destroy it more?” We should not speak of such painful things, even if the human is acting in an inhumane way.

(The Rebbe now explains that animals only got their wild behavior after the Cheit Eitz Hadas. When the Rambam explains that when the Posuk says that lions will eat hay that the nations will not fight with each other. That doesn’t necessarily mean that he is being Sholel the Poshut pPshat. He simply understands it to mean that nations of the world will not fight. The Rambam certainly knew of the other opinions. In later generations, the Posuk was also explained literally. Since when Moshiach comes the world will return to the way it was before the Cheit, in reality animals are not naturally wild Chayos.)

Returning to our subject. When a person leaves his Torah and Tefillah and goes into the street. He sees that the world is getting progressively worse. People have a lack of consideration for each other. Nations do not mind provoking another nation. This person must take extra care not to cause harm to another even if that means depriving himself. As we see people who do have what they need still always want more and more and more no matter how much he has. He finds greater pleasure in other people’s possessions rather than his own. The situation is getting out of control. The parents tell the child that since he behaved well, he didn’t hit his teacher (which is considered an accomplishment nowadays!), he can be rewarded with the ability to use this destructive device and view whatever he wants. And since both his parents tell him that he is a “smart boy” he can get whatever he wants.

When you ask the parents how can they do this, they respond, “It’s a constitutional right, and you cannot tell me what to do in my own home.” This has a negative effect on the parents, for when the child steals and doesn’t get what he wants, he ends up hitting his parents! It is a shocking situation which has been happening for the past 20 years in this country getting worse and worse by the year.

(The Rebbe relates how he spoke with the Attorney General, whose job is to prosecute such incidents to ensure it doesn’t happen again, and asked him, “How come when you began your job many years ago there was such a low crime rate, and now it has drastically risen?” And the AG just smiled and left it.) What does it mean left it? That since then the situation only got worse.

Let’s look at the education of the children and see how the changes to it affected the children. Now all that happens is that they need to hire a new policeman to try and find a way to catch the “smart boy or girl” and we don’t know what will happen. And they will find a good lawyer who says the same claim as the parents, that telling someone how to raise their kids is in violation of the constitution.

There is a story that during the trial of Mendel Beilis the defendant gave reasonable points which the prosecutor could not argue. So instead he pointed out that since the stamps on the envelope which contained the face of the Czar were upside down, it was a rebellion. Yet it had no connection to the points being made of what was inside the envelope. We see this lack of response in today’s situation as well.

We see this in the changes in education. It used to be that both the mother and father believed that there was a creator and someone who runs the world. This is a main principle in the 7 Mitzvos. In fact this country was founded by a group of people who wanted to freely believe that there is someone who controls this entire world, and there was no need to school children on it, for it was firmly implanted into everyone.

As the child grew older and became a Bar Daas he saw that his parents, older siblings, and grandparents all believed that “ יש בעל הבית לבירא זו , and that the world is not a jungle.” And if G‑d wasn’t mentioned in school too often it was fine because the child grew up with it in his home.

As the generations went on, the Emunah was not as much emphasized, yet each child knew that before eating or before going to sleep they were to acknowledge their creator. Years later, it then became necessary to teach faith in school. This was done by teachers who believed in G‑d and knew that if it wasn’t taught it would lead to destruction. Now there is a sickness that people want to abolish G‑d from schools!

And today it is an accomplishment for a school to say that there were only this and this amount of students hitting teachers in school. Something unheard of in this city just a few years ago. And in most cases it actually happens more, but teachers are too afraid to report it so they will not get fired!

(To conclude with something positive: We should use the Rebbe’s message to promote a moment of silence in schools, and teach the world about Emunah, causing the Geulah, now!)