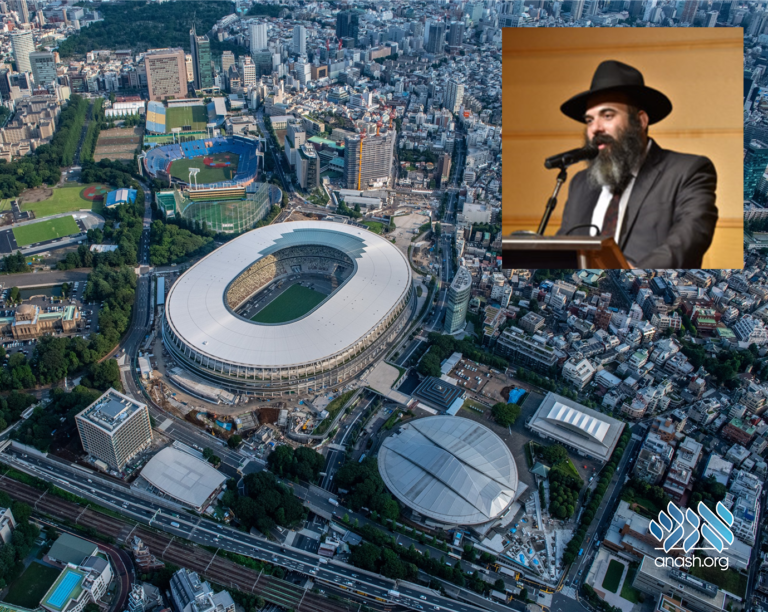 By Howard Blas for Chabad.org

The 2020 Tokyo Summer Olympics are still more than six months away, but the team at Chabad-Lubavitch of Tokyo is already hard at work. Rabbi Mendi Sudakevich, who arrived in Tokyo 20 years ago from his native Kfar Chabad, Israel, is gregarious and creative—and has plenty of ideas for serving Jews who will be playing in, watching or otherwise involved with the Olympics.

The Games come in addition to a booming surge of interest in Japan. While 8 million people visited the island nation in 2010, nearly 40 million came in 2019—exceeding Japan’s own goal by 15 million. This partially accounts for why it had been so hard for the rabbi to find available event space this summer so he can meet the needs of Jewish athletes and guests.

Sudakevich and his wife, Chana, will be creating a temporary Jewish center in the Olympic Village that will have a full schedule of Shabbat and weekday services, kosher-food offerings and meals, and more. “We will have parallel activities going on at the Chabad House at the same time,” explains the rabbi, who notes that the center has a mikvah as well. Similar to the Chabad presence at previous Olympic Games—from Athens to Rio de Janeiro and Sochi to South Korea—Sudakevich will be flying out a full crew of rabbinical students to staff the various Jewish pop-up stations around the massive capital.

The rabbi says that he has been in touch with various Olympic delegations from Israel and around the world. For the first time ever, in September, Team Israel’s baseball team qualified for one of the six berths to compete in the Olympic finals. However, this won’t be Team Israel’s first trip to Japan. Sudakevich fondly recalls the baseball team’s last visit in March, when one of their games coincided with the holiday of Purim. “We read megillah for the whole team,” Sudakevich tells Chabad.org.

One member of Team Israel’s baseball team is Danny Valencia, who has racked up impressive credentials while playing on eight Major League baseball teams. “I had a normal Jewish upbringing. I went to Hebrew school and celebrated my bar mitzvah,” says the infielder, whose mother is Jewish. “We went to synagogue on the High Holidays; my mother fasted on Yom Kippur. I was around Judaism.”

That makes Chabad an important stop for him on his baseball journey, especially when he’s with an entire team of Jewish ballplayers. Valencia particularly enjoys the Jewish rituals he has shared with fellow Team Israel players. “On Friday nights, we had Shabbat dinner with prayers, toasts and breaking bread with the boys.”

Sudakevich says Jewish tourism in Japan will continue to rise once El Al begins direct service from Tel Aviv to Tokyo in March. Despite the rising numbers, however, most Japanese people, he notes, know little about Judaism or the Jewish people, and he hopes that the influx of Jewish tourists this year will help change that.

The Sudakeviches are one of four Chabad-Lubavitch emissary couples serving Japan. “There is one Chabad center in Kobe (a 264-mile drive or three-plus hours on the bullet train from Tokyo) and two new ones: in Kyoto, which is Japan’s No. 1 tourist destination (a six-hour drive from Tokyo), and in Takayama, Japan’s Alps (two-and-a-half hours west of Tokyo). Many tourists go there to see the real Japan.”

But Sudakevich reports that “we all work together” with a common goal of meeting the Jewish needs of their various communities. “Japan’s Jewish community is unique in that it is mostly a community of people who come to work here for a few years—bankers, lawyers, those in high-tech.” He notes that most are in their 20s and 30s, and are transient, eventually returning home to their countries of origin. “There is no second generation,” he notes.

As far as the Olympics go, locals and tourists will be able to enjoy kosher meals at Chabad of Tokyo. While Sudakevich says the community imports some kosher products from the United States, he is proud that shechitah is performed in the city of Kobe by Rabbi Dovid Posner, the Chabad rabbi of Kyoto.

Sudakevich and Chabad have experience serving larger crowds. “We hosted the Rugby World Cup over the recent High Holidays. It was a big thing. We had many visitors—Jews from South Africa, Australia and England. It was a little taste of the Olympics.”

Sudakevich expects even more visitors to the Olympics, and he says he will be ready for them. “The biggest challenge was finding an appropriate place to host the activities,” he acknowledges.

Nevertheless, he remained undaunted and finally found the perfect place. “Tourism to Japan is increasing a lot; we need a bigger Chabad House,” he says.

Reflecting on the upcoming games, the rabbi recognizes the amount of work ahead. “It is going to be a crazy month,” he says good-naturedly. “Good, but crazy.”