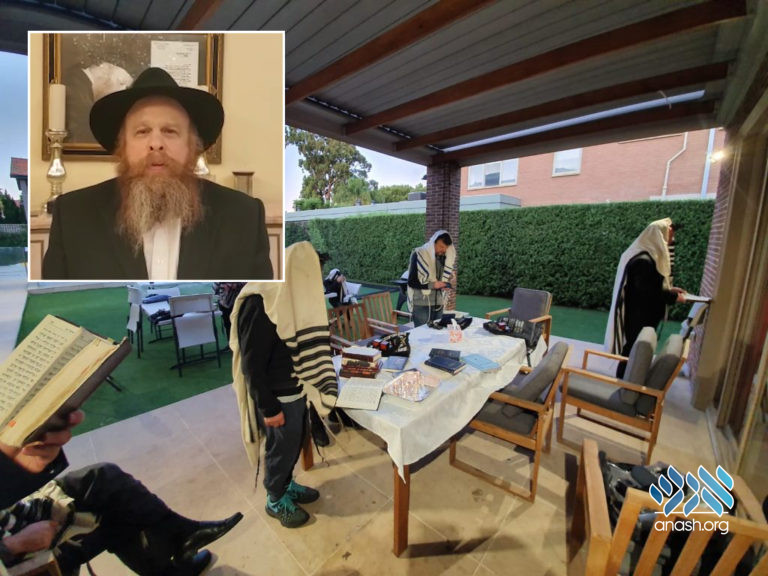 How do we understand the current challenges to keeping Mitzvos b’hidur? What is expected of us in these times? Thoughts by Rabbi Akiva Wagner.

R’ Nochum confronted his son “Why did you disobey me?” But R’ Mottel defended himself: “You told not to go because of medical concerns. But I got permission from the feldsher”.

[The feldsher was the folk doctor or peasant doctor. He had, usually, limited education and skills, but provided most of the medical care for the rural folk].

R’ Nochum immediately summoned the feldsher. “How did you allow my son to use the mikva, when this was obviously dangerous for him (because of his health)?” But the feldsher, too, had a defense: “I heard”, he told R’ Nochum, “that the Baal Shem Tov said that he takes responsibility for one tevilah (that it shouldn’t cause any damage), and on that basis I allowed him!”

R’ Nochum laughed. “I’m the Rebbe”, he said, “and you’re the doctor, and your basing yourself on a statement of the Baal Shem Tov?!”

But the feldsher insisted. “Indeed it is so, because I knew that the Baal Shem Tov could be depended on”. And he explained. “Once, one of the disciples of the Baal Shem Tov (by the name of R’ Dovid) spent Yom Kippur in our community. On erev Yom Kippur, during the seudos, I watched him consume 36 jugs of mashkeh (obviously genuine mashkeh…). And despite that, he davened before the omud for us, and was on his feet the entire Yom Kippur! So I said (to myself), if a talmid of the Baal Shem Tov can do that, then surely I can depend on the Baal Shem Tov himself!”

I think the answer is: while it is unquestionable that the promise of the Baal Shem Tov is dependable and could be fully relied on (and in fact – seemingly – the tevilah did not do R’ Mottel any harm), still it is not medical and not nature. In performing a mitzvah, one must do it according the laws of nature (as we know from the story of the Alter Rebbe with the kidush Levana, and from the known sicha of the Rebbe in chelek hey etc.).

This is true about every mitzvah and is equally true about the mitzvah of ונשמרתם מאד לנפשותיכם, – safeguarding one’s health. Although R’ Nochum could have unquestionably relied on the promise of the Baal Shem Tov – and undoubtedly R’ Nochum could have easily provided his own supernatural protection or cure for is son even without depending on the Baal Shem Tov – but that wouldn’t be performing the mitzvah within nature.

This explains a number of similar stories, for example:

R’ Groinem, the mashpia in Lubavitch, once went to the mikva in a lake. He used tools to break the ice, and then removed his clothes, and proceeded to quickly immerse himself (before his feet could freeze to the ground).

Before immersing himself, being aware of the danger (there was also the danger of inadvertently moving slightly, while immersed, and finding himself trapped under the ice ch”v), he turned to the lake and declared “Know that you have no power to cause me any harm, because the Baal Shem Tov promised that one tevila will not cause harm!”

Chassidim related the story to illustrate his pure faith in the words of the Baal Shem Tov. And yet – when he was ill, the Rebbe Rashab forbade him from using the mikva, even on erev Yom Kippur (he was devastated, and he even sent other chassidim to intercede on his behalf to the Rebbe).

The Rebbe Rashab was well aware of the promise of the Baal Shem Tov. Yet, he demanded from the chosid to watch his health according to the laws of nature, and according to what medical professionals would require.

To be sure, there are times, many times, when our Rebbeim, or when tzaddikim in general, choose to bypass the laws of nature, when they disregard medical advice and heal us miraculously. But as a general rule, the require us to fulfill this important mitzvah, of caring for our health, within the parameters of nature.

Right now, the most important shlichus for us – seemingly – is the mitzvah of ונשמרתם מאד לנפשותיכם, – to safeguard our own health and those of others. And we need to do whatever is necessary to perform this mitzvah with the greatest hiddur. In Russia, the challenges were against chinuch, teaching Torah and spreading Yiddishkeit, and chassidim had to show mesirus nefesh to keep these mitzvos. Today, it seems, the biggest challenge is against our health, individually and collectively, and we have to be ready to show mesirus nefesh to keep this mitza properly.

R’ Avrohom Zhembiner passed away on chol hamoied Sukkos. On his last Yom Kippur, shortly before his demise, the doctors didn’t allow him to fast. He was very upset by this, and asked his friend and mushpa, (the above-mentioned) Reb Groinem, what he should do. Reb Groinem told him that he must eat, reminding him that the magid, due to his health, was unable to fast for 13 (or 15) Yom Kippur’s. He told him: “Just as when you fast, you are fulfilling the will of Hashem and connecting with Him, so, too, this year, by eating, you will be fulfilling the Will of Hashem, and achieving the same manner of connection with Him”!

Generally, through being meticulous about davening with a minyan, and being careful about daily immersing ourselves in the mikva (even to the point of mesirus nefesh) we became connected with Elokus. In our current situation – for some of us – our not davening with a minyan, and not using the mikva (and the Magid was often unable toivel in a mikva because of his health, just as he was unable to fast Yom Kippur) we will be doing the Will of Hashem and reaching the greatest connection with Elokus.

[And it may even have an advantage. The Rebbe said about people who sometimes go on tahalucha and are not given the ability to speak, that it says מעלה עליו הכתוב כאילו עשה. And the Rebbe said further that they even have an advantage over those who actually spoke. Because when someone speaks, you have to know if he said it well, and if he mixed in ulterior motives etc. However, when it is מעלה עליו הכתוב וכו’, then you know it is being done in the best possible manner!]

Whether or not you can daven with a minyan or use the mikva etc. is a medical question. Just as in any case of any health concerns the Rebbe instructs to follow the advice of medical professionals, so, too, now, everyone must know what they are being advised by their doctors (preferably a rofeh yedid, and preferably a chassidishe doctor who can appreciate all angles of the question). But, once you know what that advice is, following it becomes your highest calling!

We’ve surely all seen shluchim who are busy with a big event, a huge event, their biggest event of the year. In such cases, the shliach is often so busy, preoccupied and pressured that he doesn’t even have the ability to daven with a minyan (some of us may even know shluchim who experience this more than once a year and even more than twice…). And he doesn’t feel bad or guilty about. He is not shirking any duties, on the contrary, he is preoccupied with his shlichus and העוסק במצוה פטור מן המצוה!

Right now, we all have to be busy with the most important shlichus and most important mitzva – of staying safe and staying healthy. The greatest shlichus now, greater than the biggest event of the year, the biggest event of the century, is to safeguard our own health and that of all others who may be affected by us. If minyan or mikva interfere with this shlichus, then we have to be very clear what our priority is, and be solely dedicated to it.

Our mesirus nefesh and wholehearted dedication now has to be to our most important mission being healthy. And the Eibishter should grant us success in this shlichus and give every single one of us complete health and good health and protection from all dangers (and then we can return willingly to the minyanim and mikvaos and all else)!