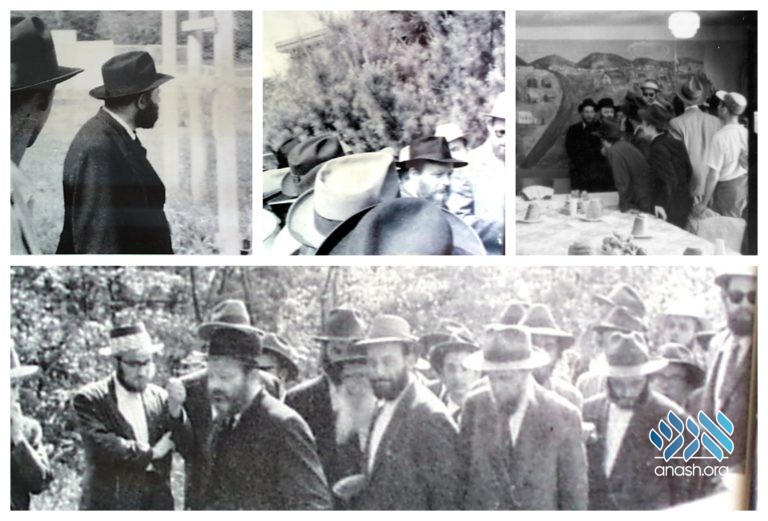 5716/1956 was the year that Camp Gan Yisroel was founded. Up until then, there was no camp specifically for Lubavitcher boys. (Camp Emunah for girls had been founded three years prior.) Those that did go to camp went to other frum camps like Camp Agudah and Camp Mesivta. Another novelty about Gan Yisroel was that it accepted any and all Jewish kids, not just from frum homes, with the hope that the kids would themselves be influenced to lead Torah lives, as well as changing their own homes.

Here’s what happened that day:

In the morning hours Rabbi Leibel Groner poked his head into the camp office at 770 and asked Rabbi Moshe Lazar how long the trip takes. (Camp had not yet started) A few minutes later he comes back and says: The Rebbe is going to travel to camp! After schachris the Rebbe climed into the car, Rabbi Yehuda Krinsky drove, and Rabbis Hodakov, Rodshtein, Groner and Kazarnovsky sat in the back.

A long caravan of cars joined the Rebbe’s car, with Rabbi Kehos Weiss, Camp Director and Rabbi Avremel Shemtov in the front car, leading the way. The lead car paid the Rebbe’s car’s toll. The Rebbe stopped along the way and said tefillas haderech. Three hours later they arrived in Ellenville, NY, home of the original camp site.

As soon as they got there the Rebbe got out and started touring the grounds. He entered the bunkhouses and walked along the lake, commenting on how the safety of the kids is paramount, and asked if it can be used as a mikvah. The Rebbe also visited the infirmary, commenting that it’s a good thing but m’zol dos nit darfen nutzen (we shouldn’t need to use it.)

At the end of the tour the Rebbe walked into the dining room and asked to wash netillas yodoyim, in honor of the chanukas habayis for the camp. Before washing the Rebbe changed into his silk Shabbosdike sirtuk, and then entered the dining room. The Rebbe asked that all those present also wash. The Rebbe had brought along some pieces of matzoh and proceeded to give them out to the approximately 50 people that were present, but the Rebbe kept some of the matzoh and put it back into his sirtuk pocket.

The Rebbe said that he won’t speak for long, since he needs to travel to Camp Emunah as well. The Rebbe then said a sicha about the general concept of a camp, that it’s intended for the health of the body, but if that time is used or strengthening the neshama as well then the rejuvenation that the body gets is considered part of avodas Hashem as well.

The crowd then sang several nigunim, the nigun hachana, and then the Rebbe said the ma’amar ד”ה בנאות דשא. After the ma’amar the crowd sang Nye Zhuritze and went into a rikud. While dancing, Kehos Weiss approached the Rebbe and told him that a vehicle with some 13 passengers had been in an accident and that the car flipped over three times. The Rebbe asked who was in the vehicle and then said “s’vet altz zein in ordenung” (all will be good.) The Rebbe then took the matzoh he had in his pocket and asked that it be given to the occupants of the car.

The sicha and ma’amar can be viewed here.

The Rebbe then bentched and distributed kos shel bracha. The sheva brochos of Rabbi & Mrs. Mendel Shemtov, a”h, took place then, so the Rebbe said “שהשמחה במעונו” at bentching. While preparing to daven mincha nobody in the crowd knew which direction mizrach was, so the Rebbe stepped out onto the terrace and looked up at the sky. He then came back and pointed to the direction they should face. Before leaving, the Rebbe gave Rabbi Yosef Weinbaum a pack of bills to distribute among the camp staff and workers as “tips.”

As the Rebbe was leaving two of the bochurim involved in the accident drove up. The Rebbe asked them about the accident and gave them a piece of matzoh from his sirtuk pocket. The Rebbe then drove to Camp Emunah, also located in Ellenville.

At Camp Emunah – which was in full swing already – the Rebbe visited the grounds, and was happy to see that the grounds are nice and clean. After the tour the Rebbe entered the dining room and spoke a short sicha. The Rebbe then bentched the girls that they grow up healthy girls that will build Yiddishe, Chassidishe homes. There too, the Rebbe left tips for all the staff, adding that they make sure that also the non-Jewish staff is part of the distribution.

On the way home the Rebbe’s car passed the scene of the accident, and the Rebbe took a look through the car window at the scene.

Note: The Rebbe had said that despite the fact that he does not usually leave New York, but the camps are an an extension of 770.

To listen to the farbrengen via the Ashreinu App, click here.