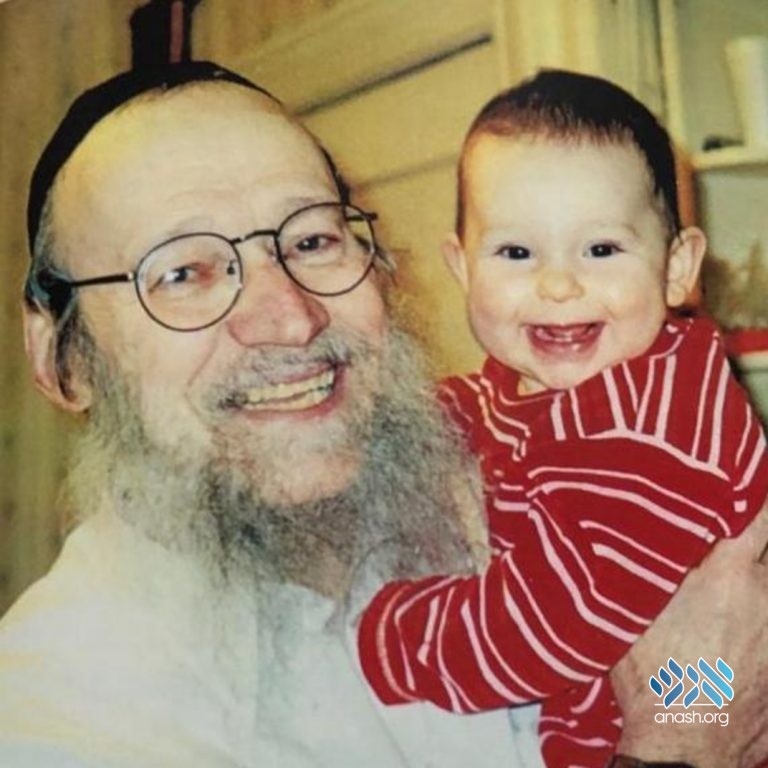 A granddaughter of Rabbi Yaakov Schwei, the Crown Heights rov who passed away on Friday, remembers, “A Rov, a special man…but to me, he’s just my Zeidy.”

A granddaughter of Rabbi Schwei shares some memories:

Last year on purim I was hanging out in 796 Montgomery- helping to answer the door, with mishloach manos- and when it was quiet I just sat there saying Tehillim.

Without me realizing, Zeidy came into the kitchen and warmed up a bit of soup for lunch. He brought a bowl over to where I was sitting, put it down in front of me, and with his whole face lit up said, “Service with a smile!”

A Rov, a special man…but to me he’s just my Zeidy.

I had the zechus of eating at my grandparents’ home almost every shabbos, and it was always a rush to prepare the salads before Zeidy came home from Shul.  If he would come before they were ready, he would get right into action, peeling eggs, bringing things to the table….

He was always asking if the eggs were easy to peel, getting this satisfaction when I had an easy time peeling them, because he made sure to put them in cold water before. However Zeidy could help, could make things easier, more pleasant, he did.

Zeidy was always asking me what I’m learning in school, and when I would tell him a subject he would nod intensely and ask me questions on the subject, his face lighting up if I got the answer right and patiently explaining it to me if I got it wrong.

Zeidy showed me how to have such an excitement for yiddishkeit, always making up rhymes, smiling, all those cute “vertlach” that he repeated in his signature enthusiastic way..

I’ll never forget Zeidy coming into the kitchen, stopping, and saying, “Al KOL neshimah uneshimah tehallel kah- with EVERY single breath we should praise Hashem.” He breathed with that every second; every breath and thing he did was for Hashem.

Zeidy always wanted my hair to be in a pony.
He would always remind me, and I tried, but I forgot/didn’t do it quick enough/thought he wouldn’t notice, a lot of the time…excuses.

One Shabbos he came home from shul and peered at me, asking me a few times in yiddish, “Who are you?” When I replied it was me, he said gently with a confused voice, “Oh, but it doesn’t look like Chaya Mushka!”
My skirt was too short…gulp.

One time he told me:
“You know, the sign that a person has yiras shomayim is that is words are niskabel, accepted.”
And from then on whenever he would see me with my hair down he would say in that soft question voice:
“Where’s my yiras Shomayim…?”

A few weeks later on shabbos he told me:
“A proof that you need to wear a pony is that we say ‘Pony (pnei) Shabbos Nekabla!'”
And it became almost a refrain-said with the utmost love, gently, even with a smile every time he saw me frantically putting my hair up a bit too late-
“PONY Shabbos Nekablah!”
He was so happy when he saw me remembering on my own.

When said by Zeidy, it was like getting a hug every time, because I knew and saw that zeidy was telling me that because he loves me so so much. And really cared, cared so deeply about me as a person that Zeidy, who valued peace so much, went through the discomfort of telling me off, and did it in such a delicate, gentle, nice way. He constantly reminded me not as a “policeman”, but as a Zeidy who clearly saw the beauty, strength, and vitality derived from the Torah, and he was desperate to share that with me. Because he LOVES me.

To my tayere, helige Zeidy:
I used to put my hair up in a pony especially for you. Just when you were around. Just to make you happy.
Now you see me wherever I am.
I will show you that all those efforts you put into me had results.

I hope to make you proud.

If you have any memories or stories of Rabbi Schwei, please share them!
And thank you to all who already did; these treasures are a comfort to the family.