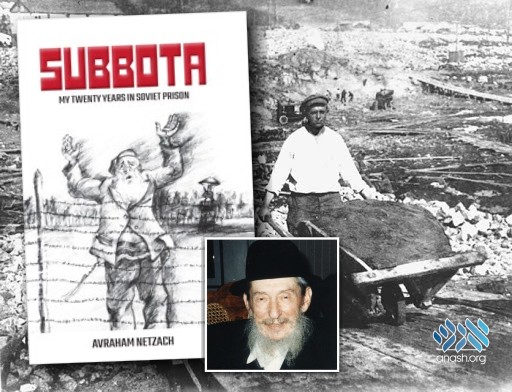 The memoirs of ‘Avrohom Netzach’ printed in the book ‘Subbota’ were considered a must read for many years until the book disappeared from the market. Now, it has finally been reprinted, to the delight of young and old alike.

Subbota is available for purchase at Seforimdeals.com. Free delivery in Crown Heights on orders over $49.

For many decades, the memoirs of ‘Avrohom Netzach’ printed in the book ‘Subbota’ were considered a must read for and could be found in any Chabad library and many a house. However, after going out of print, the popular title disappeared from shelves to the disappointment of parents and children looking for quality chassidishe reading material.

Just recently, after many decades, the book was reprinted by Heichal Menachem in Yerushalayim. Arriving in the USA this week, the book is being snatched up by young readers who heard about this book for years, and older readers who remembered reading the book in their youth.

Printed in the 70’s, the book told the story of the Chassidim trapped behind the Iron Curtain, a story still very relevant at that time. The fear was still so prevalent that the book, written by R’ Eliezer Nannes, was published under the pen name of ‘Avrohom Netzach’ for fear of Soviet retribution against the author or those mentioned in the book.

R’ Eliezer Nannes, or R’ Leizer, was urged by the Rebbe himself to print his memoirs. The Rebbe told him that he should “write a book recounting his personal battle with ‘Amalek’ and the miracles he experienced for the benefit of generations to come.”.

The Rebbe told R’ Leizer that his book would result in many balei teshuva, a promise which has been realized as the book was printed and reprinted as well as translated into numerous langues.

The memoirs describe R’ Leizer’s twenty years in Siberian labor camps. It was there where he got the nickname ‘Subbota’, meaning ‘Shabbos’, given to him by the camp guards because of his uncompromising dedication to observing the holy day of rest.

In his youth, R’ Leizer studied at Yeshivat Tomchei Temimim in Lubavitch, under the guidance of the Rebbe Rashab. The Rebbe sent R’ Leizer on a number of important missions, including to Harav Yisrael Meir Kagan – the Chafetz Chaim – in Radin, Harav Yosef Rosen – the Rogatchover Gaon – in Dvinsk, and Harav Levi Yitzchak, father of the Lubavitcher Rebbe, in Yekaterinoslav.

After his marriage in 5681 (1921), he was an emissary of the Frierdiker Rebbe, who sent him to teach and encourage fellow Jews. After his release from Russia, he served as the spokesman representing Russian Jews at the request of the Lubavitcher Rebbe. In that capacity he was a member of the board of directors of Kollel Chabad in Israel, among other duties. He continued teaching Torah almost to his last day.

R’ Leizer learned self-sacrifice for Torah and mitzvos from his Rebbes. Although a person is not obligated to give up his life to keep Shabbos, the Talmud teaches that times of religious persecution call for self-sacrifice even for something as minor as the distinctive way a Jew ties his shoelaces (see Rambam, Hilchos Yesodei HaTorah 5:2-3). When the Soviet regime sought to uproot Shabbos and eradicate any trace of Judaism, they closed yeshivos, chadorim, shuls, and mikvaos throughout the Soviet Union. The Frierdiker Rebbe responded to the persecution with a call for self-sacrifice.

At a time when countless Jews were tortured and exiled to Siberia for adhering to Torah, R’ Leizer’s self-sacrifice defies description. For twenty long years in Soviet slave labor camps, his oppressors were determined to break him, but R’ Leizer prevailed. Neither torture nor brutal punishment could separate him from Torah and mitzvos.

Subbota is available for purchase at Seforimdeals.com. Free delivery in Crown Heights on orders over $49.