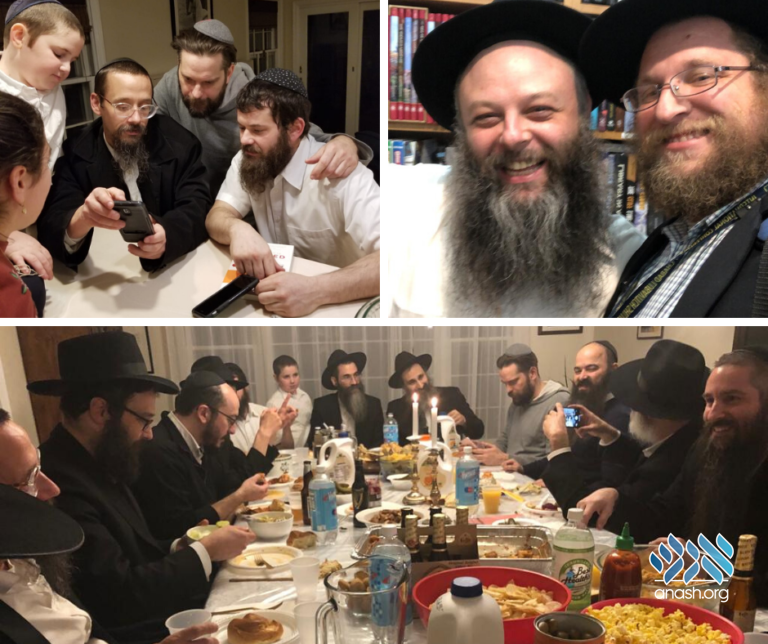 Twenty years have passed since 1999 and a few alumni of Yeshiva Tiferes Bachurim in Morristown, NJ, got to talking.

They spoke of Yeshiva Tiferes Bachurim in Morristown NJ and figured that they would like to get together again in the place where it all began for them.

This grassroots idea quickly developed to become a Shabbos reunion of over 35 former students ka”h!

From California to Florida and from multiple countries around the world (as far as Eretz Yisroel) husbands were encouraged by their wives and families to go back to their Yeshiva and their Hanhola to learn and give each other chizuk.

Right from the onset one of the Roshei Yeshivas addressed the group in the Zal by saying “Welcome back to the reunion and the Seder will be….”

However, before he could finish the sentence a spontaneous eruption of dancing began around the bima!

This set the tone for the entire weekend as some people stayed on to learn until Monday!

Rosh Yeshiva Rabbi Zalman Dubinsky taught an in-depth Shiur on Likkutei Sichos and the Friday night meal was lead by Rabbi Chaim Brafman. A musical Melava Malka was held in the home of Rabbi Dovid Dick.

“This is a great accomplishment,” said Dean Rabbi Moshe Herson “and from my vantage point I see this as just the beginning of a new trend for many groups of former students of Tiferes Bachurim”

The Seudas Shabbos together with the Roshei Yeshivas and Mashpiem was enjoyed by a tremendous camaraderie good resolutions and ahavas Yisroel. The late Farbrangen into the night did not prevent them from all being there for Tehillim by 8 am the next morning.

The inspiration and friendship felt by all was clear by the many letters and expressions of interest to repeat the alumni Shabbos next year, as well.

Here’s a sampling of some of the letters to the Yeshiva:

“Returning to Tiferes last Shabbos felt like a return to Gan Eden. I was able to perceive and appreciate Tiferes on a much higher level than I was two decades ago. This came about through the INCREDIBLE ahavas Yisrael and achdus amongst all of the chassidim there. Thank you to all of the Rabbis and to all of my brothers in Tiferes for charging me up with the ahavas HaShem, ahavas Yisrael, chayus, and simcha I need to continue! I’m eagerly anticipating our next reunion – may it take place in the 3rd Beis HaMikdash right away!”
~Aryeh Greenberg – Hallandale Beach, Florida

I came back to Morristown with a great appreciation for the time spent there as a Bochur; for all the light and inspiration received at that time and for how lofty a role it has played in all of my thoughts and aspirations ever since. At this weekend I felt very accepted and embraced by Hashem, the Rebbe, my colleagues, the rabbis, and the very walls of the yeshivah. It was very reaffirming of where I’m holding spiritually and it allowed me to integrate more of the holiness of Morristown into my post-bochur life.