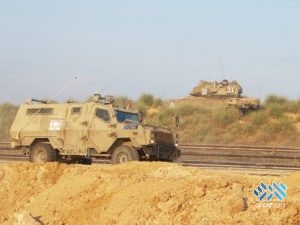 Three IDF soldiers were injured overnight Wednesday, one with moderate wounds, after soldiers engaged in a firefight with a Hamas terrorist who had infiltrated Israel at the Gaza border fence. In a statement Thursday morning, the IDF said that the three were in Israeli hospitals, and their condition had improved after overnight treatment.

Soldiers on patrol observed the terrorist and ordered him to stop. Instead, the terrorist opened fire on soldiers, who returned fire, killing the terrorist. The IDF said he was wearing a Hamas military uniform and had several weapons, including the Kalachnikov weapon he used to shoot at the soldiers, as well as knives and firebombs. The IDF believes that he was operating alone and not on the orders of Hamas, the statement said.

The IDF also attacked a Hamas position in Gaza during the incident. A number of roads were closed in the area overnight Wednesday, and residents of towns in the area were ordered to stay inside, over concern that the terrorist had an accomplice. The all-clear was given Thursday morning.

The terrorist’s remains are now in the IDF’s hands. In a letter to the IDF’s government coordinator, Avi Bluth, the father of missing IDF soldier Hadar Goldin, Hy”d, demanded that the IDF continue to hold the terrorist’s remains until his son was released or his remains handed over. In the letter, Simcha Goldin said that “for the past five years the government of Binyamin Netanyahu has been handing over the bodies of Hamas terrorists despite Cabinet decisions to halt the practice. We are asking that the government not continue with its mistaken policy of releasing these bodies as long as Israeli soldiers and citizens are being held by Hamas.”