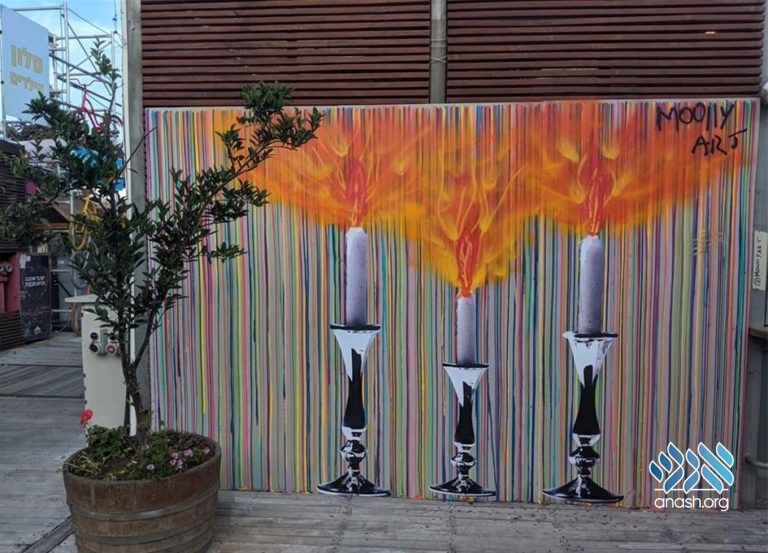 By Yoni Brown for Chabad.org

Amid the bustle of Jerusalem’s iconic First Station, new flashes of color adorn the walls of the historic railroad station, now an outdoor mall. Three Shabbat candles shine brightly from a pop-art mural, spreading their glow on a colorful backdrop. Street art is a very contemporary medium, but the message of this piece is timeless.

The piece is called “Spread Your Light–To The Street,” and its creator, New Jersey-based rabbi and artist Yitzchok Moully, sees it as an expression of the Baal Shem Tov’s call to spread the wellsprings of chassidus outward. “This is literally bringing the message of chassidus to the street,” said Moully.

Moully’s work is featured along with that of eight other international artists in the Jewish Street Art Festival, which is part of the Fourth Jerusalem Biennale, an art exhibition held once every two years. This time round, the Biennale is showing the works of more than 200 artists from 15 countries.

“The idea behind the festival is to highlight street artists who feature Jewish themes or content in their work,” Hillel Smith, street artist and lead curator of the festival, told Chabad.org. “Street art provides an opportunity to put art in front of people when they aren’t expecting it. As a result, it has the power to engage with people directly—to present them with ideas and initiate a conversation with them.”

The public reception has been fantastic, said Smith: “People were taking selfies with our murals before they were finished! It’s rewarding to see the work be embraced so quickly.”

Moully (known as “The Pop-Art Rabbi”) did another piece of street art for the festival, this one located just outside the Old City on the Artist’s Colony building. “They had these seven covers over air-conditioning units, and they asked the artists to do a series of paintings on them. The theme “Seven Days of Creation” made sense, and I was asked to do Shabbat,” explained the artist. “Certainly, Shabbat is all about spreading light.” Nothing quite captures this sentiment better than Shabbat candles.

The Lubavitcher Rebbe greatly encouraged the lighting of Shabbat candles even by girls as young as 3. In keeping with this, Moully told how the Rebbe once told renowned Chassidic artist Michoel Muchnik that when he paints Shabbat candles, there should always be three candles: two larger ones on the sides and a smaller one in the middle. “It’s the idea of the nuclear family, the two parents lovingly protecting the child,” he said.

While Moully was working—perched on a boom lift wearing paint-speckled attire and a hard hat—a family walked by. A young boy with the family asked aloud, “Why are there three candles?” Moully replied that the Lubavitcher Rebbe wanted even young girls to light. “It’s amazing,” he said, “how the Jerusalem Biennale allowed me to spread the Rebbe’s light further.”

Do a Mitzvah, Change the World

In the wake of the synagogue shooting in Pittsburgh last year, Moully was searching for a way to artistically demonstrate the victory of light over darkness. He painted one piece specifically dedicated to the Pittsburgh victims on the theme, but as Chanukah rolled around, he felt he needed to do more.

“I wrapped my family’s RV in black vinyl, added the words ‘#Light Over Darkness’ and printed a menorah right at the bottom,” described the artist. “Armed with a 100-plus bright markers, we drove through New York and New Jersey, visiting schools and places where menorah lightings were being held. We’d ask people to commit to doing a mitzvah and then write it on the wall. The act of writing it on the wall brings light in addition to the light of the mitzvah itself.”

The Biennale asked if he could do something similar in Jerusalem. He settled on a design for an interactive installation that explored the theme of light over darkness, as well as the theme of this year’s Biennale, “L’Shem Shamayim” (“For the Sake of Heaven”). Built during the holiday of Sukkot as a sukkah, the aim is to encourage passersby to complete the structure with their light.

Constructed of a reflective plexiglass exterior and completely white interior, the reflective nature of the exterior draws observers into the space. “To me, the sukkah is an interface between heaven and earth,” he said. “The walls of the structure are a blank canvas.” He encouraged people to complete the space by doing a mitzvah or committing to doing one, and then place a sticker depicting a flame anywhere on the wall.

As the walls are filled, the internal space becomes a visual representation of mitzvot changing the world. The goal is to make people think about the spiritual effect of their physical actions—how even the smallest positive step elevates one’s surroundings.

Rabbi Yitzchok Moully’s installation is on display at the Hechal Shlomo Museum, ​58 King George St., Jerusalem. Hours are Monday through Thursday, 9 a.m. to 3 p.m., through Nov. 28.