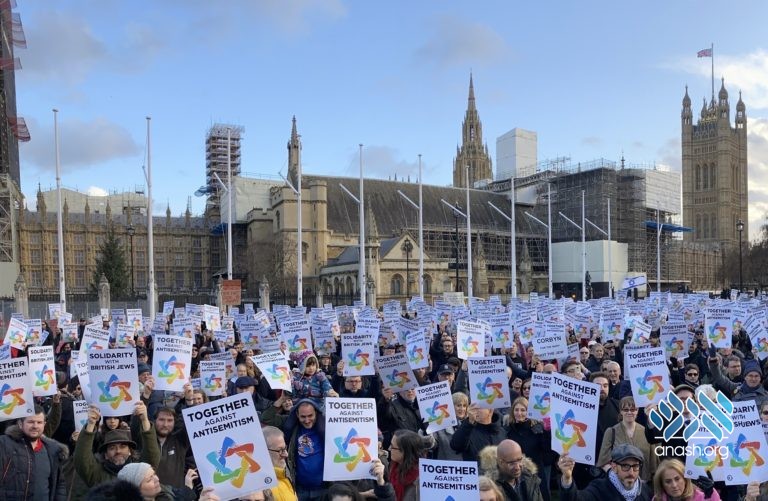 With days to go until the General Election in Great Britain, more than 3,000 people gathered in Parliament Square to stand against antisemitism.

More than 3,000 participants, Jews and non-Jews, held signs reading “Together against anti-Semitism,” “Antisemitism = Racism,” “Solidarity with British Jews” and “racist Corbyn unfit to be PM,” referring to the head of the Labour Party, Jeremy Corbyn.

Organized by the Campaign Against Antisemitism, the rally took place four days before the UK general election on Thursday. However, the organization made it clear this was an apolitical rally, “so that Jews and non-Jews alike can say clearly and with one voice that we stand together against antisemitism.”

No speaker directly mentioned Corbyn or his party, which has been accused of institutional anti-Semitism. Corbyn has been dogged by criticism over anti-Semitism in Labour since his election as party leader in 2015.

On Sunday, a leaked document from the Labour party’s internal disciplinary department, show that many Labour members, several of whom had called for the extermination of all Jews, remained in the party for months and even over a year and were given a lenient punishment or none at all.

While Corbyn has repeatedly claimed that the issue of anti-Semitism was being dealt with in a serious and swift manner, the leak had showed that there were more than 130 outstanding cases, despite the vast majority of them having been reported 18 months prior to that. One such case has not been ruled upon for more than three years.

Some party members have been kicked out for anti-Semitic rhetoric, but others have been readmitted and thousands of complaints have gone unprocessed. Corbyn himself has called Hamas and Hezbollah his “friends.”

“Jeremy Corbyn has created a movement of antisemitism that didn’t exist before,” one participant said. “And they are already blaming Jews – there is already a Jewish smear campaign, and calls of Jewish interference. They will turn on us if Labour loses the election – they already are and it’s a somber thought. There are more antisemites in Britain than ever before, and that’s on the shoulders of Jeremy Corbyn.”