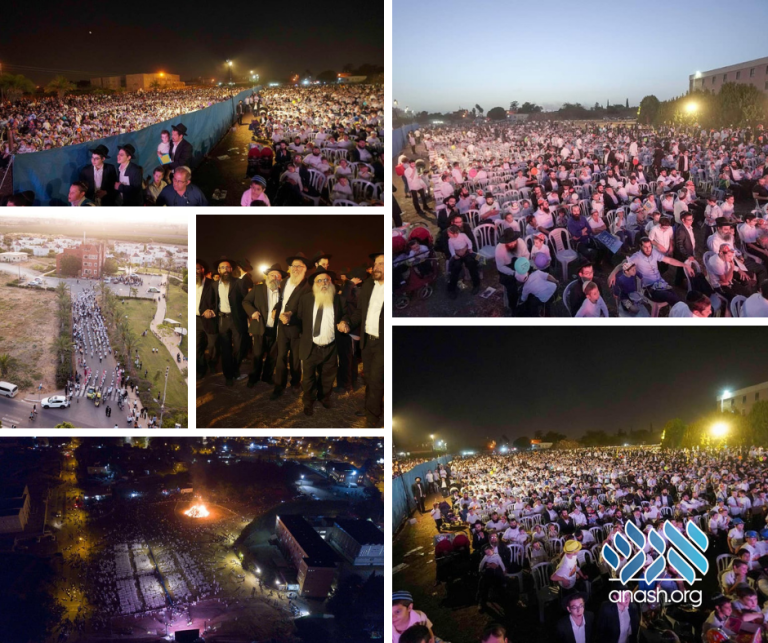 Kfar Chabad was established by the Frierdiker Rebbe on 29 Iyar 5709/ 1949. On Lag Baomer, the community marked its 70th anniversary with a massive parade and celebration.

In 5704/1944, Rabbi Eliezer Karasik, one of the heads of Aguch in Eretz Yisroel, had an idea to start a farming village for Chabad families. Through working with the land, the residents would support themselves and raise funds to build mosdos.

After World War II, Rabbi Karasik went to Europe to visit the chassidim there. Immediately after, he and his brother in law Rabbi Moshe Gourarie went to the Frierdiker Rebbe in Crown Heights. While there, they went in for yechidus many times. At the end of the month, Shneur Zalman Shazar, who later became the president of Israel, was called in for a yechidus during which the Frierdiker Rebbe spoke to him about establishing this village.

At a farbrengen in 5709, Shazar and members of Aguch began to speak seriously about establishing Kfar Chabad. Over the next few months, they found an abandoned village, Safiriya; in Iyar of that year, a few chassidim led by Rabbi Pinchas Althaus and Rabbi Eliezer Karasik moved in. Finally, on Chof-Alef Iyar 5709/1949, Kfar Chabad was established.

On Motzoei Shabbos Parshas Behar, the Frierdiker Rebbe sent them a letter in which he wrote that a Sefer Torah had been sent to them.

The Frierdiker Rebbe put a lot of work into establishing and raising money for the community of Kfar Chabad. After the histalkus, the Rebbe continued to encourage people to move there, and the community began to grow. In its early years, most of its economic resources stemmed from farming and agriculture. Over the years, Kfar Chabad flourished into a city of close to 7,000 residents with chadorim, yeshivos and shuls.

On Lag Baomer, thousands proudly celebrated Kfar Chabad’s 70th birthday by joining in a massive parade and celebration. The joyous event featured a spectacular musical performance including a choir and specially choreographed dance for the occasion. A letter filled with warm regards from Prime Minister Netanyahu, written for this occasion, was read on stage. The evening ended with a huge bonfire, music and dancing.