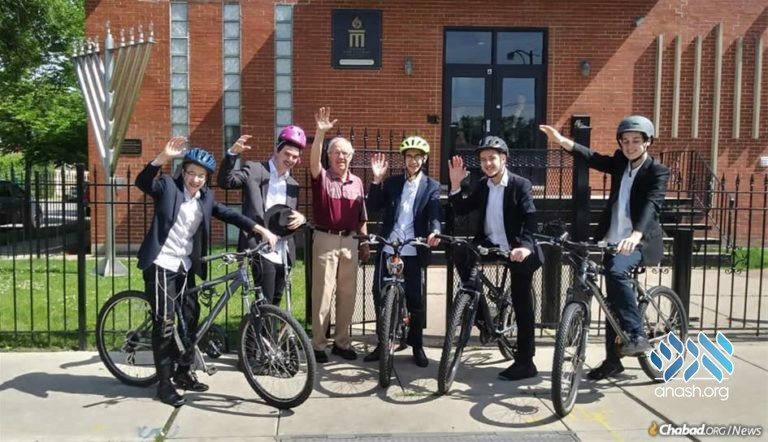 CHICAGO—Crouching in his two-car garage in Chicago’s West Rogers Park neighborhood, Bill “the Bike Man” McGraw is in his element. Bicycles of all sizes and stages of repair lean against the walls, cars and furniture, and even hang from the rafters. He’s happily fiddling with the brakes of a half-rebuilt child-sized bicycle.

What began two decades ago as a small favor to some yeshivah students has grown into a full-blown hobby. McGraw is on a mission to get a bike into the hands of anyone who needs one, especially (but not only) fellow members of the Chicago Jewish community.

An avid cyclist and a retired marketing executive, McGraw recalls the day he first noticed the need. “It must have been about 20 years ago, and I saw some students of the Lubavitch Mesivta, which is just a few blocks from my house. They were walking outside with their heavy sefarim. I asked them how they were going to get back to the Mesivta, and they told me they had no choice but to walk. I had some bikes in my garage, and I offered them to the school’s administration.”

One thing led to another, and McGraw soon found himself supplying bikes to every yeshivah student and hundreds of other happy recipients.

He gets bikes in varying states of disrepair from a number of sources.

Over the years, the silver-haired McGraw has built connections with several high-rise-building managers, who give him bikes left by tenants who move on.

On his own early-morning bike rides, he keeps a sharp eye on garbage piles, always on the lookout for bikes that he can restore to usability.

He also gets a steady stream of bicycles from the ubiquitous metal collectors who troll Chicago alleys for resalable scrap materials.

Twenty years after he gave away his first bicycle, McGraw estimates that as many as 2,000 bicycles have passed through his garage.

“I’m not shy, and I get around,” says McGraw about how word spread about his penchant for giving away bicycles. “As long as there is a kid in our community who is in need of a bike, I’ll be on the lookout for one for him or her.”

Administrator of the Mesivta Avraham Hershkovich says “the amazing thing is that Bill never acts like he is doing a favor to us or our students. On the contrary, he is so very happy and grateful for the opportunity to get another person riding. That’s something everyone can learn from.”

His recipients are not all from the Jewish community. With a working knowledge of Spanish (his mother was Italian), McGraw has given away hundreds of bicycles to recent migrants from Latin America in need of reliable and affordable transportation.

For more than 20 years McGraw has been supplying bikes to every yeshivah student who needs one, and hundreds of other happy recipients.

McGraw was born and raised in Spring Valley, Ill., where he had several Jewish neighbors. “I was always curious about Judaism and felt connected to the Jewish people,” he says.

“Growing up, I only heard the nicest things about the Jews. My parents taught us to view all people equally, never dividing between anyone. When I asked my mother why some of our neighbors worshipped separately, she simply explained, ‘They want to pray in a different place.’ ”

Despite there being no evidence of Judaism in his family’s past, McGraw says there may have been some subtle hints. His mother never served pork at home and baked fresh bread every Friday, traditions she brought from her hometown of Venasca in northwestern Italy.

After serving in the U.S. Army as a cryptographer between 1963 and 1966, he returned to Illinois to further his education and earned a degree in communications at SIU in Carbondale.

There he met some kippah-wearing Orthodox Jews from New York, and he “was hooked.” Seeing them light candles on Friday afternoon and attend services on Shabbat sparked his interest in exploring Judaism in earnest.

After a stint with a Reform congregation in Evanston, he converted to Judaism under the cRc (Chicago Rabbinical Council) and raised a Jewish family with his wife, Gail (Golda Gita), whom he married in 1977.

A longtime resident of West Rogers Park, he is fully engaged in all areas of Jewish life.

“I’ve worked since I was 12 years old, raised my kids and traveled a lot,” reflects McGraw, who regularly attends minyan and volunteers at a host of organizations, including an English school for recently arrived adults from Spanish-speaking countries. “My wife tells me that if this is what gives me nachas [“satisfaction” or “joy”], then I should continue to do it, and she’s right.”