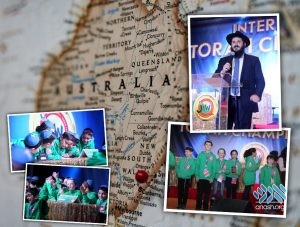 After two wildly successful years of JewQ competitions in North America and Europe, the program is launching in Australia with 200 children from nine Chabad Hebrew Schools.

After two wildly successful years of JewQ competitions in North America and Europe, the program is launching in Australia, where close to 200 children from nine Chabad Hebrew Schools are uniting for their first Torah championship.

“We’ve had amazing feedback from JewQ,” says Rabbi Zalmy Loewenthal of CKids International. “We wanted to give children in Australia an opportunity to learn and participate as well.”

JewQ, a project of CKids, is a Torah-learning championship that was created to give children who don’t attend Jewish day schools an exciting opportunity to learn fundamental Judaic knowledge.

Once students register for the program through their local Hebrew Schools, CKids mails them copies of Living Jewish, a book that covers Jewish fundamentals such as basic prayers, blessings, and Jewish holidays. The children are tested on the material and then compete for the JewQ Champion title in a national game show-style championship with other Hebrew School students in Australia. Because of the lockdown measures in place in some of the country, the competition may be done semi-virtually.

“There’s only so much one can teach in a Hebrew School setting,” says Rabbi Reuvi Cooper of Chabad Malvern, Victoria, who is directing the Australian branch. “This program takes care of teaching all the basic Jewish knowledge every child should have, so the classes can focus on instilling Jewish pride and providing hands-on experience.”

What blessing does one recite on a kiwi? What are the names of the Twelve Tribes? Who was Miamonidies? These are some of the concepts the children are expected to know. “The quality of the book and events are top-notch and gets the kids eager to participate,” says Cooper. “It’s a real, professional game show with all the bells and whistles that the kids take seriously. We’re really looking forward to beginning it here.”

Rabbi Moshe Kotlarsky, Vice Chairman of Merkos L’inyonei Chinuch observes that the impact “this will have on their lives for years to come and on the lives of generations after cannot be overstated.”