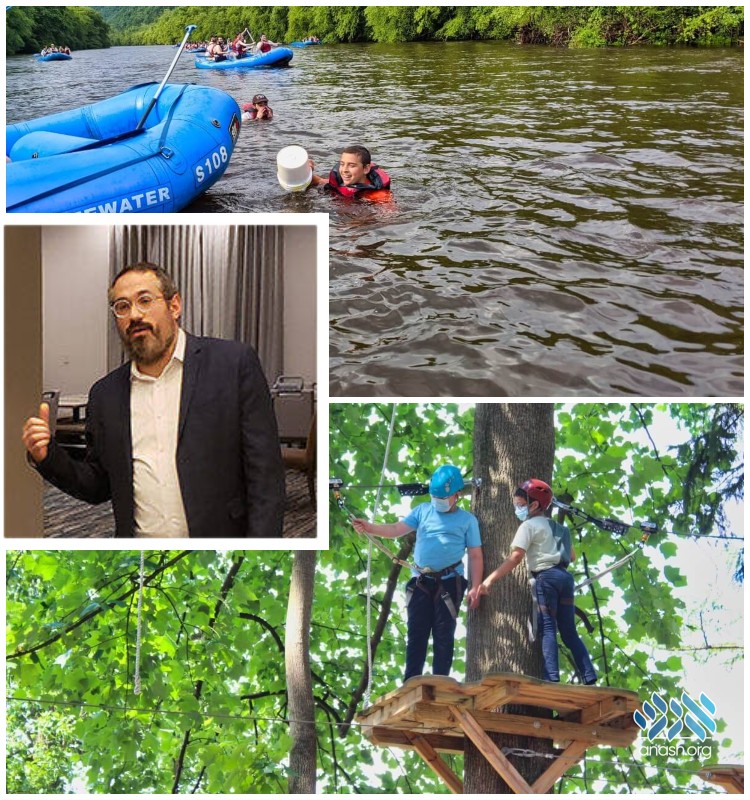 When New York State announced that overnight camps were canceled, there were three weeks left to the summer. Despite all odds, directors of local schools managed to create a camp for close to 1,000 children.

For nearly four months, the Bell family was shuttered inside their small apartment in Brooklyn, N.Y. The mother, Faigy Bell, had been so sick with COVID-19 that she spent nearly a week in the hospital and five full weeks just lying in bed as her body battled the virus, while her husband, Mendel, cared for their six children.

“I thought, ’Whoa, this is crazy. What are the boys going to do in the house all day?’ ” said Faigy Bell, who lives in the neighborhood of Crown Heights, an urban neighborhood in Brooklyn. “We don’t have access to a yard; we have a porch, and that’s about it. My boys are very active and we haven’t been doing anything or been able to go anywhere. It’s a very small apartment, and they were so bored.”

According to the Foundation for Jewish Camp, 2019 Camp Census, 164 nonprofit Jewish overnight camps, which includes 12 Chabad-affiliated camps, served a total of 80,718 campers. More than 40 percent of the camps are located in the Northeast.

Knowing that they had to act—and quickly—officials at Crown Heights boys’ yeshivas stepped in to create a much-needed overnight camp experience for their students in grades four through 10 who were coming off months of social isolation and confinement to, in many cases, small apartments. They were so focused on their goal, they managed to put the camp together in just 3 weeks. It opened to excited campers on July 6.

“We realized that it was our responsibility to step in, especially given what they went through,” said Yossi Langsam, director of operations at Educational Institute Oholei Torah, a kindergarten through post-high school boys school in Crown Heights and administrator of United Lubavitcher Yeshiva, another Crown Heights school. “You can’t just keep kids cooped up all summer and then expect them to come back to school ready to learn and develop healthy come September. They need to socialize with their friends, kick a ball and do the things that kids do.

“Many of these children are confined in typical Brooklyn apartments—a five- or six-story building with one elevator, and two or three bedrooms with large families. They don’t get to run around in green grass.” continued Langsam. “They have been cooped up in their homes for several months, unable to interact with friends which has been taking a toll on their mental wellbeing. They haven’t been walking to school which has been depriving them of basic social interactions. We knew as community schools we had to do something as their future was at stake.”

The toll the pandemic is taking on the youth isn’t just theoretical.

A study by the Universidad Miguel Hernandez in Spain and the Universita degli Studi di Peruglia in Italy found that “85.7% of the parents perceived changes in their children’s emotional state and behaviors during the quarantine.” Italy was one of the first countries hit especially hard by the coronavirus back in March and April; Spain followed not long afterwards, with some areas in the country back on lockdown as of last week.

And, research suggests, increases in loneliness and social isolation in children may lead to high rates of depression and possible anxiety—conditions that may not end once the isolation is over.

Langsam is also concerned about something else lost during the long hours staring at a screen; the quality education of in-classroom instruction where children learn Jewish values by which to live by. Indeed, the Rebbe taught that an overnight camping experience is one of the Jewish community’s most powerful tools for inculcating Torah values and building a strong identity. While the Rebbe rarely traveled outside of New York City, in 1956, the camp’s first year, in 1957, and again in 1960 he made repeated visits to the Gan Israel camp in Ellenville, N.Y., and later in Swan Lake, N.Y., and visited Camp Emunah for girls as well, demonstrating his commitment to the critical role of Jewish camping.

‘The Grounds Are Huge’

Langsam and his staff began touring camp sites in Pennsylvania, where overnight camps are permitted, and where some overnight camps nevertheless announced they wouldn’t be opening this year, leaving their grounds available. They found a campground that would work and that was large enough for them to maintain social distancing.

“The grounds are huge,” he explained. “It is 300 acres of fresh green land. It includes a lake, two large swimming pools, multiple sport fields; baseball, tennis, basketball and beautiful bunkhouses. We are not relying on just one dining room—we split the boys up into four makeshift dining rooms ensuring the kids are properly spread out. We have two Hatzalah emergency medical staff members there full-time.” In addition, arrangements were made to ensure that campers, counselors and other staff were in good health, and access to the grounds is being strictly controlled.

When they had 95 percent of the plans in place, they reached out to parents at both Oholei Torah and United Lubavitcher Yeshiva. Within a few days, they had the entire camp booked and a sizable waiting list.

The fact that the school is running the camp actually made it more appealing to the Bell family. As Faigy Bell said, “I was absolutely thrilled because this isn’t just some random organization opening up a camp. It’s our school; it’s where we send our children.”

“We know and trust them,” added her husband, Mendel Bell. “We feel confident that they are doing everything they can to make sure everyone is safe. They have people consulting that everything is safe and that they are following guidelines.”

Camp began last week, and already, campers have made themselves at home and enjoyed the grounds and activities, including swimming, playing ball and navigating a ropes course. And though they are at camp, the boys have continued their Jewish studies, albeit in a more relaxed camp setting.

Said Langsam: “Thank G‑d, camp is off to a great start.”

VIDEO: YKK Week One in Review