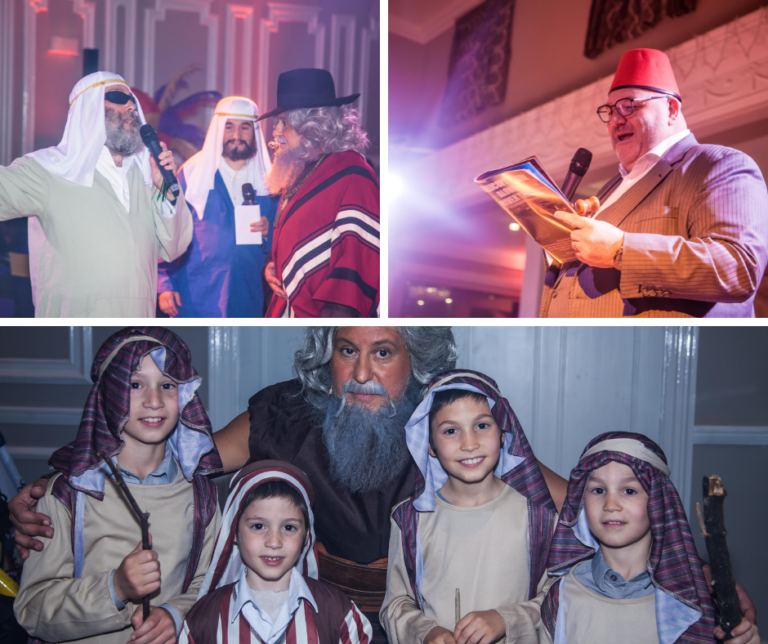 Moshe, Miriam and other professional actors join Rabbis Sufrin & Brandman in fancy dress at a Fundraising Theatrical Dinner for Chabad North East London & Essex – an experience like never before!

Essex was a buzz of life at the end of last week as Chabad across Essex came together to put on a totally unique and original event as their annual fundraising dinner making history being the first such attempt by any major charity to do something so different as its Annul Dinner.

Guests who walked into the Prince Regent Hotel Ballroom in Chigwell were welcomed by actors dressed as “Jews from the time of the Exodus from Egypt”. After a lively reception with an open cocktail bar and live music, guests were ushered into the main ballroom that was decorated like a dessert. An air of mystery surrounded as everyone was seated, and Toastmaster Robert Persell, who had called to dinner dressed in a suit just a few minutes earlier now appeared as a Shepard to help guests find their seats.

Suddenly, the lights dropped and the “Voice of G-d” echoed throughout the room welcoming guests to this special experience. In came Moses, played by Adrian Silas, accompanied by Aaron and Miriam who came to find two Rabbis to assist them. They were leading a flock of Jewish People through the wilderness and were looking for a community for them to settle in. In comes Rabbis Sufrin and Brandman who were also in suits at the reception, but now in fancy dress to join in the theatrics.

Through an evening of drama, entertainment and video, the two Rabbis explained to Moses and his People how the Chabad communities of Essex had everything they needed. Then, once the virtues of the communities were explained, it was made clear that “money doesn’t grow on trees in Essex” and everyone in the room could do their part to support the work on Chabad for the wider community.

Rabbi Aryeh Sufrin MBE, Executive Director, commented “Chabad has been active and doing fundraising dinners on and off here for over 40 years now. We needed to come up with something totally new, unique, fresh and original which would ensure people had a really fun evening while the serious message of the work of Chabad and the support it relies on, comes across at the same time. With the help of Rabbi Brandman, our Buckhurst Hill Branch Director, we approached Adrian Silas, a member of the local community who has a rich past experience of putting on the most creative and entertaining events in the industry and he was up for the challenge”.

So, how did the evening transpire? Invites went out and tickets were sold which left the mind wondering what would actually be at the evening. The invites included “theatrical experience” and “biblically themed fancy dress optional”.

Rabbi Odom Brandman said “everyone had a fantastic and memorable time, it was certainly very different and we were very happy with the way it turned out. Adrian pulled it off with the assistance of a fantastic team and now we have to think how we can better it next year”.

After a couple of funny videos showing the work of Chabad across Essex, a wonderful meal catered by Reich, a game with £20 notes and an auction, the tone suddenly became a lot more serious. A video was shown of a man standing in the cemetery, telling his story of how he lost his son to drugs and how Rabbi Sufrin and Chabad had been a tremendous support. Then as the video ended, all lights turned to the centre stage and out walked Laurie Rosenberg who made an emotional and passionate appeal to support the ongoing work and growth of Chabad.

As Rabbi Sufrin got up to make a vote of thanks, a surprise video recording was played of Rabbi Yossi & Rivka Posen, currently in Eretz Yisroel, who will be moving to Epping to run the new Chabad Centre in time for Rosh Hashanah this year!

Once the formalities were over, music played, magicians went around the tables and desert was served so that everyone could socialise and enjoy the rest of the night. Over 250 guests joined the evening and approximately £50,000 was raised to support the work of Chabad to be divided between the Head Office and Centre in Gants Hill, Centre in Buckhurst Hill, new developing Centre in Epping and work taking place in Southend.