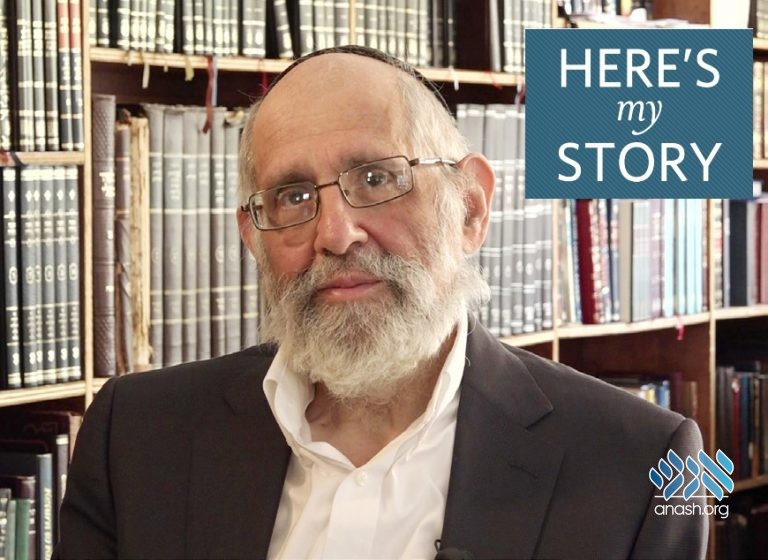 When Rabbi Avrohom Flint wanted to drop out of yeshiva to learn in college, the Rebbe gave him advice that changed the trajectory of his life.

Rabbi Avrohom Flint worked for twenty years for the Jewish Community Council of Crown Heights, and for another twenty for the New York City Department of Finance. He is presently retired and living in Brooklyn. He was interviewed in his home in May of 2019.

Both of my parents came from Lodz, Poland, where they got married and raised two children. When the Nazis invaded Poland, they were herded into the Lodz Ghetto which was liquidated in August of 1944, with the residents sent to concentration camps. Both my parents managed to survive and be reunited after the war, but their two children – a brother and sister whom I never met – did not survive.

My mother became very quickly pregnant again and gave birth to my older sister in 1946 in a DP camp. Unfortunately, my mother was not in the best shape at the time and my sister received poor prenatal care, so she ended up being sickly her whole life. I was born two years later and, when I was a baby, we immigrated to the United States, settling in the Brownsville section of Brooklyn where some Lubavitchers lived at the time.

Although my parents were not Lubavitch, they came from a chasidic background and, when I reached school age, they sent me to the chasidic school nearest our house which happened to be a Lubavitch school.

The Rebbe had taken over the leadership of Chabad-Lubavitch two years earlier, in 1951, and the stories about him were already spreading. My mother, who had very strong belief in the power of tzaddikim, naturally gravitated to the Rebbe.

Her reliance on the Rebbe, his blessings and guidance grew even stronger when my father – who had been physically and mentally broken by his experiences during the war – passed away when I was twelve, just two months before my Bar Mitzvah.

All along, the Rebbe treated my mother with incredible patience and empathy. I recall her telling him about her experiences in the Holocaust – which took a long time – as the Rebbe listened with great attention. He was also very patient whenever she broke down in tears, as she spoke about how sickly my sister was, one of the main topics of every audience we had.

As for me, I saw the Rebbe every year around the time of my birthday. Usually, he would ask me what I was learning and then quiz me on that subject. I still remember a few of his questions because he stumped me a couple of times.

Once he asked me about the teaching of the Mishnah concerning a watchman who locks up an animal in its pen and then goes to sleep. “Is he liable if the animal is stolen during the night?”

“He is not,” I answered correctly.

“But why not?” the Rebbe wanted to know. “Instead of going to sleep, he could have stood outside with a revolver in his hand.”

I was stumped. I completely forgot that standing guard all night is beyond what a watchman is obligated to do.

The next year, he asked me a similar question. It had to do with the obligations of a guardian who invests an orphan’s money by buying an animal with a defect. Is he responsible to return the money out of his own pocket if he made a bad investment?

“Why?” the Rebbe asked. “If the animal is missing teeth, that is a hidden defect, but shouldn’t he have opened the animal’s mouth and looked in?”

Again, I was stumped, but later I realized that the Rebbe had basically asked me the same question as the year before – that is, the answer relied on the same principle.

The Rebbe also took an interest in my personal life, inquiring what I did with my free time, encouraging me not to waste it and to spend it in Torah study.

When I finished the Chabad high school, I did not – like a quite a few of the other students – consider myself a Lubavitcher. This had a lot to do with the approach of the school’s administrators who set out to give us a good religious education but didn’t try to press us into becoming Lubavitch.

However, the Rebbe had his eye on me. When, in 1965, I went in for an audience on the occasion of my seventeenth birthday, he asked me about my plans after graduation. I hadn’t given it much thought. I basically thought I’d just enjoy the summer. But I was too embarrassed to say that.

In response to my silence, the Rebbe offered a suggestion: “It would be a good idea for you to study in Montreal this summer.” (There was a Chabad yeshivah in Montreal and that is where the Rebbe was recommending I go.)

I didn’t know what to say, so I just stood there.

“All right then,” the Rebbe continued. “We’ll make all the arrangements for you. All you have to do is to pick up the papers from my secretariat.”

So that’s how I ended up in Montreal for the summer, and when it was over, the Rebbe asked me, “Regarding next year, would you prefer to continue learning in the yeshivah in Montreal or in New Jersey?”

I decided on Montreal and stayed there for a year, after which I informed the Rebbe that I wanted to quit because my mother wanted me to go to college. I blamed it on her. But in truth, though she was concerned I learn a trade that would help me earn a decent livelihood, it really was my choice.

But the Rebbe thought it was a better idea for me to continue to study in Montreal. As he put it: “Volt geven a guteh zach, un a gleiche zach, un a zach vos is tov b’meod meod,” which literally translated means: “It would be a good thing, and a proper thing, and a thing that is very very good.”

I got the message. And I did what he recommended.

Why did I do it even if I was not so inclined?

Because I had absorbed my mother’s faith in the wisdom of tzaddikim. And I truly believed that the Rebbe knew what was best for me. (As it turned out, he did.)

I stayed in Montreal for a couple of years, by which time I grew a full beard like a good Lubavitcher, and then I transferred to the main yeshivah in Crown Heights.

All the while I felt that the Rebbe was looking out for me. When I started dating for marriage, he gave me a blessing to find a suitable match, offering me advice that served me in good stead. He said that fellows can be very picky and, as soon as they see some imperfection, they have a tendency to reject a girl who could be a suitable candidate. “Don’t be hasty in making a negative judgment about someone,” he cautioned me. “Look with a good eye,” he said, “and you will see virtues that are there and those that will develop over time.”

When I left yeshivah, I was offered a teaching job at Hadar Hatorah, a Chabad institute that had been founded specifically to educate those new to Torah observance. The Rebbe blessed me that I should see much satisfaction from my students, and I did.

All in all, the Rebbe’s caring and wise advice guided me on a proper path. Although I would have been better off materially if I had gone to college, doing what the Rebbe advised brought me other kinds of riches.

As my mother would say, the Rebbe always knew best.