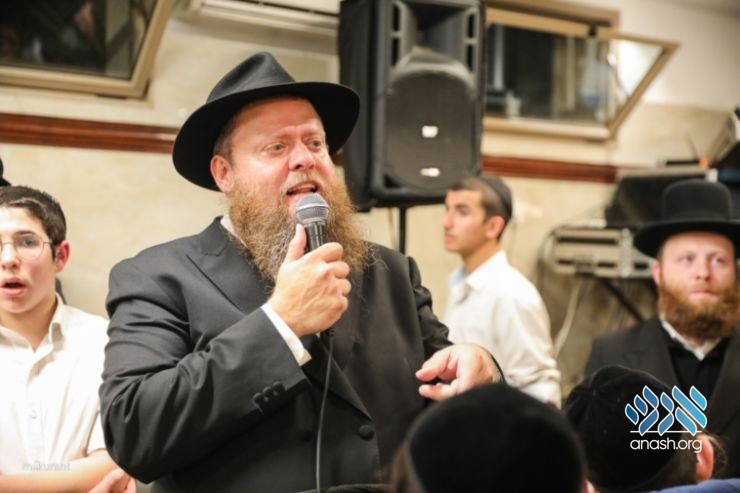 After spending a inspiring Shabbos in Monsey, Israeli journalist Yedidia Meir gives a profile of Dudi Farkash and the ‘Chassidus of the truck drivers’.

By Yedidia Meir for B’sheva.

The antisemitic terrorist chose Monsey last week as a target for hatred. He entered the home of Rabbi Chaim Leibish Rotenberg, in the midst of a Melaveh Malka on Motzei Shabbos Chanukah, and stabbed one Jew and then another. If a table had not be thrown at him, he would have stabbed all the Jews of the world.

The weekend before the attack, we had the zechus to spend a Shabbos in Monsey. If there is a place with Jewish pastoral – it’s there.

Huge villas, endless grassy areas, Chassidim walking leisurely with colorful towels on their shoulders en route from the mikvah. A Frum version of Savyon in Israel. The only thing that can disturb residents’ peace of life here is the thermostat of their (private) mikvah. If heaven forbid the thermostat breaks and the water was not at the perfect temperature it would be really bad. But don’t worry, they don’t break. Everything is perfect.

Then the terrorist came and began to cut Jews.

2
The surge of anti-Semitism is shaking the Jews here, who until recently thought they were living in the most comfortable exile since the destruction of the Temple. Something about this worldview has cracked.

But I don’t have anything smart to add to everything that was said and will be said about the shocking anti-Semitism this week. Maybe I even prefer to repress my thoughts. After all, I didn’t think, that when we were on a ‘shlichus’ in the United States, they would constantly ask us if the attack was close to our neighborhood and if they had already seized the terrorist. So I want to focus on Monsey itself, and tell about a special community I was exposed to there.

Dudi Frakash (45) grew up in Jerusalem. He is a member of a Chabad family with 17 children (yes, that is not a typo). Most of them became shluchim spreading Torah and Chassidus around the world: He has a brother in New York, two brothers in Washington, two in Buenos Aires, a brother in Los Angeles, a sister in Australia, a sister in Cyprus, a sister in the Normandy region of France, a brother in Jerusalem and even a sister who set up a Chabad house with her husband in one of the most challenging Jewish locations right now in the entire world: Ramat Gan.

Each of the Farkashes, they and their spouses, are an empire of shlichus in their own country. When they reunite by a family simcha, the family reunion becomes a mini Kinus Hashluchim.

But Dudi chose a different course of life. He is a businessman, seemingly. Why seemingly? Because a real Lubavitcher can never stop his shlichus. His and his wife’s houses on Olympia Street in Monsey became a unique type of Chabad house, bringing Torah and Chassidus to one of the most complex populations: young people who grew up in Chasidic courts and abandoned them.

3
Shabbos, 9 am. Dudi sits at a table at the end of the spacious kitchen, surrounded by sifrei chassidus and cheesecakes, and eagerly learns a sicha from the Lubavitcher Rebbe with the first people who arrived for davening. The davening here, in the shul in his house, will begin at ten in the morning. But there are those who even that time is too early for them. They will only come in for Mussaf. You know, that bit of davening that comes before the kiddush.

That doesn’t bother Farkash. The door of the house is open at any hour. Physically open, not metaphorically. It is impossible to know what time someone’s Jewish soul will wake up and urgently need to daven or eat herring.

One of the charming moments in this unconventional minyan is Farkash’s “Mi Sheberachs”. The landlord is also the rabbi, the chazzan, the gabbai and the aide to the gabbai. One man minyan. It’s all with grace and humor and a lot of charisma. Everyone who get an aliyah gets personal attention by the Mi Sheberach. Farkash wishes exactly what needs to be wished for, and reinforces where it needs to be strengthened, flatters and even insults – V’nomar Aaaaaaaaamen.

Let it be clear: we are not discussing a rabbinical figure. We said, a businessman. We said, cheesecakes. But all with a great spirit of love and caring for every Jew. Not only if he is completely secular, a karkafta, tattooed with an earring, but also to a Jew who until recently put on Rabbeinu Tam Tefillin. Even if he is the grandson of an important Rebbe. Even if he is the grandson of Rabbeinu Tam himself.

4
There is something touching about these small communities of young people who had the longest list of excuses to leave Yiddishkeit, a list from here to Williamsburg, but they chose to stay. They chose to take responsibility for their Judaism, even their Chassidus. Farkash tells me this is a phenomenon here in Monsey, and in the United States in general. Guys who grew up inside the big Chassidic courts, but they just didn’t fit it.

After a short or long search period, they realized that they can’t just cut everything off, they had to find their own way.

In the afternoon we walk about forty minutes by foot to a community that was inspired by Farkash’s minyan, who invited him to speak for them. “The truckers’ minyan,” they call it.

I enter a shul located in a large tent – and am fascinated. “How goodly are your tents, Yaakov; your dwelling places, truckers” They designed the shul with their ten fingers, printed and hung colorful posters on the walls with sayings and proverbs of various figures that inspire them: Rabbi Nachman, the Lubavitcher Rebbe, Rabbi Shlomo Carlebach, Rebbetzin Yongrais and even some powerful texts that circulate on WhatsApp anonymously.

5
Farkash opens his sermon with a story: “A man enters a bar and orders a drink. The bartender gives him a drink, the guy says thank you, drinks and then smashes it on the head of the stunned bartender. “Oh, sorry, sorry, I don’t know what happened to me today,” he apologizes profoundly, “It wasn’t really in my control. I’m really ashamed”, and embarrassed, he walks out of the bar.

The next day he returns again, orders a drink again, drinks, and again smashes the glass over the bartender’s head. This time the bartender is already showing much less patience. “Listen, sir, if you do it one more time, I am calling the police. There is a limit to this behavior.” The drinker, once again, is filled with shame, and apologizes with the utmost sincerity: “I do not understand how I came to do something like that. I’m so ashamed and embarrassed, ” he says and leaves the bar in tears.

You can guess the next part of the story: The next day our friend comes back, orders a drink, drinks, and smashes the cup on the bartender’s head. Well, at this point the bartender doesn’t talk too much. He calls the bar’s security guards, and they call the police. The police officers arrest the offender, he is taken into custody, tried and sent for mental health treatment.

After six months of intensive care, our friend is released from the hospital, and already on the first evening goes to the same bar. He comes in, walks over to the bartender still standing there, and says to him, “Hey, do you remember me?”

“Obviously, how can I forget you,” The bartender replies, scratching his head. “Listen, I just came to say thank you.” says the former glass-smasher “Thanks to your determination, six months ago, I was taken to a mental hospital, and what can I tell you? My life has changed from one extreme to the other. Thank you very much. Say, can you have a little drink? “

The bartender smiles and brings our friend his order. He drinks, takes the glass and smashes, yes, smashes it on the head of the bartender while he proudly declares: “That’s it, I’m after the treatment now! Now I understand myself, I know where it comes from and what childhood traumas caused it. I learned to stop being ashamed! ”

6
Everyone laughs, and then Farkash tells his personal story in one short sentence that says it all: “By the age of 17, I had moved to 7 schools, and not because we had moved apartments … At 17, I was already out of the system.”

At this point he goes on to talk about the hero of this week’s parsha, Yosef Hatzadik: “Yosef had every reason not to stay true to the path. He was an orphan from an early age. His brothers laughed at him, and then they wanted to eliminate him, and in the end, as a compromise, they sold him. He was charged with false accusation and jailed for many years. He has all the excuses to take off his yarmulka. His life was in the dumps. But Yosef understands that problems with his home and with his sector are no reason to stray.

“So true, he wasn’t exactly like his brothers, he didn’t stay with them in the same Chassidus, but his emunah was strong. His direct connection to G-d was real, and that’s the main thing. He did not let the mistakes of the people around him make him give up on Hashem. He did not allow the difficult place he came from, the attitude he received from his surroundings in his youth, to destroy his present and future. “

7
I am not an anthropologist but I have a feeling that this Chassidus I saw in Monsey, the Chassidus of those who left their Chassidus, will only grow. In the huge ‘Shiner’s Minyan’ in Uman on Rosh Hashana – the annual gathering of Chassidim who do not belong to any official Chassidus, but refuse to let go of their own Chassidus – I have seen thousands of them with my own eyes. Davening like they never davened. Connected like never before. Singing for many long minutes with great intent repeatedly ” הנני מקשר עצמי, רוחי ונשמתי… “.

This week Monsey made headlines, not for a good reason. Every media outlet in the world covered the town. The devout Chasidic communities, the big and old Chassidic courts, the Rebbes.

And I also thought of one small Chasidic court, the Chassidus of the truck drivers.

This article originally appeared in Hebrew in B’Sheva