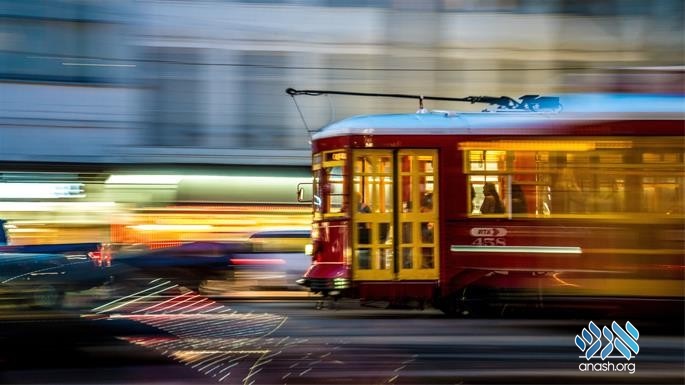 One of the more popular questions that professors of ethics like to pose to their students is “the trolley problem.”

By Rabbi Yehuda Shurpin for Chabad.org

One of the more popular questions that professors of ethics like to pose to their students is “the trolley problem.” The basic question goes like this:

There is a runaway trolley moving toward five people lying tied-up on the tracks. You are standing next to the switch that controls the trolley. If you flip the switch, the trolley will be redirected onto a side track, and the five people on the main track will be saved. There is, however, a single person lying on the side track, and if the trolley is diverted to there, that single person will be killed. You have two options:

1. Do nothing and allow the trolley to kill the five people on the main track.

2. Flip the switch, diverting the trolley onto the side track where it will kill one person.

Which do you choose?

Ethics professors often frame this conundrum as a battle between “utilitarianism” (which would dictate that the most appropriate action is the one that achieves the greatest good for the greatest number, e.g., kill one to save the many) and “deontology” (according to the rules, the action is wrong, regardless of the consequences).

What is the Jewish answer to this ethical dilemma? Let’s frame the competing issues in halachic terms.

The Torah commands us “not to stand [idly] by [when the] blood of your fellow [is spilled].” In other words, if your fellow is being killed, you should save him. But murder is also forbidden according to the Torah, so can you kill one person to save the life of another?

If the question is between two individuals, then, in general, we have a rule that “we don’t set aside one life to save another.” As the Gemara puts it, if someone says to you, “Go kill so-and-so, and if not I will kill you,” it is preferable that he kill you rather than you kill another. For “why do you think that your blood is redder (i.e., more precious than another’s)?”

Thus, inaction is preferred, since we cannot make the choice between two lives (that is, unless one person—or fetus, for that matter—is directly pursuing or causing the death of another).

But what about transgressing the prohibition of killing one in order to save the lives of many?

One for the Many?

Although some rabbis have debated this question without coming to a conclusion, the consensus is that we may not actively kill someone even to save many others. This follows a teaching in the Gemara Yerushalmi that was later codified by the Rambam and the Shulchan Aruch:

If a group of Jews was traveling and a group of non-Jews chanced upon them and said, “Hand over one of your group or we will kill you all,” even if all will be killed, they may not hand over a soul.”

Rabbi Eliezer Yehuda Waldenberg (Jerusalem, 1915–2006) in his responsum Tzitz Eliezerdiscusses the trolley problem, and based on the above halachah, writes that one cannot actively cause a person to die even if it will save many more. As earlier commentaries explain, the Talmud’s statement that one should let himself be killed rather than kill another, “for why do you think that your blood is redder?” is essentially saying that we cannot fathom the infinite value of a life. Thus, we must refrain from taking action that implies we know how to evaluate one life over another or even many. All we can do is leave it to heaven and follow the Talmudic dictum shev ve’al ta’aseh (“sit and do nothing”), taking a passive tack, for any active killing is forbidden.

Although it may not apply to the classic “trolley problem,” there are some instances where the one may be singled out to save the many.

In the book of II Samuel, we find an incident where an individual by the name of Sheva benBichri, from the tribe of Benjamin, led a revolt against King David. When the king’s soldiers, led by his general Joab, found that he had taken refuge in the city of Abel of Beth-Maacah, they surrounded the city and were ready to destroy it. A certain wise woman called out from the city and tried to convince Joab not to destroy the city. Joab informed her that he really didn’t want to destroy the city but was merely seeking Sheva ben Bichri, who had lifted his hand against King David. He promised that if they would surrender the criminal, he would depart from the city. The people of the city then killed Sheva ben Bichri, and Joab and his army departed.

There is a debate in the Talmud whether the inhabitants of the city were in fact permitted to kill Sheva ben Bichri. In the final analysis, they were permitted since he was (a) singled out and (b) deserving of capital punishment due to his revolt against the king.

In the words of the Rambam:

If they single out a specific individual and say: “Give us so-and-so or we will kill all of you,” different rules apply: If the person is obligated to die like Sheva ben Bichri, they may give him over to them. . . . If, however, he is not obligated to die, they should allow themselves all to be killed rather than give over a single soul.

Rambam adds that even in a case where a person who is deserving of capital punishment is singled out, we don’t just hand him over, but rather first try to find a way to avoid doing so.

In another incident discussed in the Talmud and commentaries, two pious brothers, Lulianus and Pappus, falsely confessed to killing the daughter of the king—a crime that the Romans had blamed on the entire Jewish community—so that the Romans would kill them instead of the entire community.

Rabbi Waldenberg explains that they were permitted to do so either because (a) they would have been killed anyway as part of the community had they not stepped forward themselves, or (b) although we may not kill someone to save even a multitude, a person on his own may be permitted to volunteer and sacrifice his life.

At first glance, one may be tempted to say that due to the sanctity of life, one should try to save as many people as possible, and the unwillingness to sacrifice the life of one to save the many means one is too much of a moral stickler for the “rules.” In truth, from a halachic perspective, the opposite is true. It is precisely due to the infinite value of a single soul that we are told not to even attempt to take an action that implies we can measure the value of that life.

Of course, we need not wait until we are faced with questions of life and death to realize the infinite value of a single soul. Every time we walk in the street or hear of one in need, we need to be cognizant that every soul has infinite value.