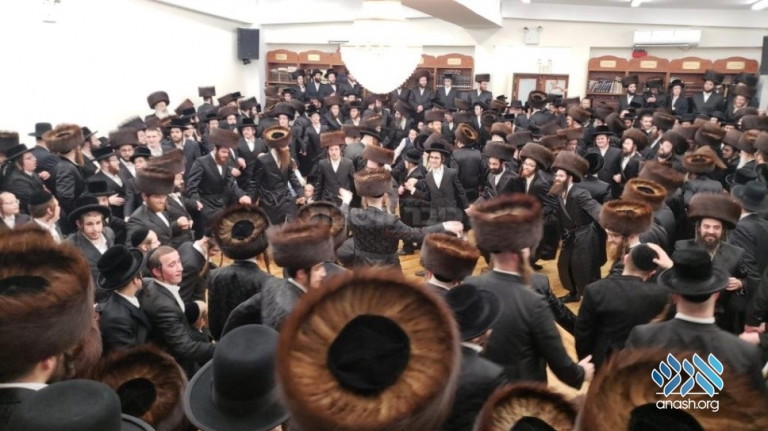 The Rebbe’s encouragement for making frugal chassunos is well known. Now, one Williamsburg family actually did it.

Rabbi Yoel Roth of Breslov has been lecturing for years how the high cost of weddings these days is a total waste of money. How it causes people to go into debt and remain that way for the rest of their lives. He also promised that he would lead by example when it came time to marry off his own children. Tuesday Isru Chag, he delivered on that promise.

He married off his first child. Starting from the engagement he minimized on chosson/kallah presents. No gold anything. He did away with invitations, announcements were placed in daily circulars. He made the wedding in his own yeshiva in Williamsburg and had an mp3 player playing the music. The yeshiva staff, as well as friends, cooked the food. Nothing fancy, but the joy was to the heavens. The wedding also finished at 10:47pm. Total cost of the evening= $1000.

While this kind of cost-cutting might be slightly ahead of its time, the Rebbe very much lamented how people spend way beyond their means when it comes to simchas.

But the real surprise was yet to come. When the kallah’s parents, Rabbi and Mrs. Moshe Yitzchok Hecht of New Haven, were in a yechidus, they received a warm “yasher koiach” from the Rebbe in person!

Naturally, when the word got out, this had a great impact on the excess expenditure of the simchas among Anash.

In 5719 (1959), the Rebbe told Reb Nissan Neminov the following in yechidus, asking him to publicize it:

“I am unhappy with the lifestyle of chassidim in America. A chassunah used to be a small, warm affair, where everyone would contribute by making some food, so everyone felt that they were part of the simcha. Here, however, the chassunah must be held in a hall, which also adds financial strain on the host.

“Then there is the pressure on the guests to bring a gift, which puts a strain on a friend who cannot afford one, to either go without a gift or to borrow money. Even if a chossid is willing to swallow his pride, and come without a gift, his wife will not hear of it. And so he’s pulled into debt…

“Finally, there is the table plan. Here, the host must place everyone according to their social status, without offending anyone. This also adds extra strain on the host. One could well imagine what kind of chassidishe farbrengen could take place in such a setting.

“I obviously cannot tell anyone to act differently; to be the odd one out…”