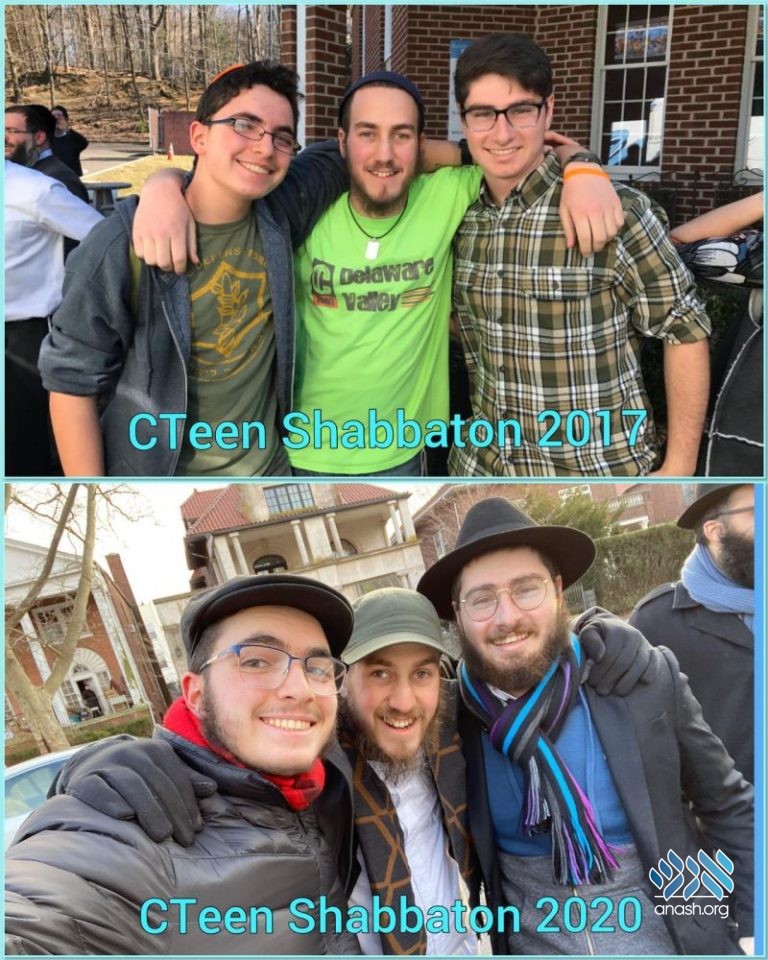 You’ve seen the photo: three young men, on their journey of discovery, of unearthing a deeper connection to their Yiddishkeit.

You’ve probably seen it by now: a photo of three young men on a journey towards a deeper connection to their Yiddishkeit. Who are they, and what happened between the CTeen Shabatons of 2017 and 2020?

“When my family came from Ramla, Israel to New Jersey, we found a home just down the street from the Cherry Hill Chabad,” Yoni Shochat told Anash.org. “We’ve been going there since I was three years old. I went to Hebrew School and Camp Gan Israel as a kid; after my Bar Mitzvah I began volunteering.

“Getting involved in CTeen was a natural next step. I went on my first shabaton when I was a sophomore in high school; it was my first time in Crown Heights, and my first time fully keeping Shabbos. It was a powerful experience, and I didn’t want to lose it.”

Zack Horowitz‘s CTeen story began at the Quaker college prep school he attended in Wilmington, Delaware. “It was while I was there that the Fliksteins reached out to me. Rochel had been my hip-hop dance teacher. I didn’t know what CTeen was and I had never heard of Chabad before. The only reason I was doing this was to have diversity on my college application.

“As I started going, it began to pique my interest. I began to realize that I’d been a product of the society I was living in, with morals that were constantly changing. I was just going along with their definition of success. I would stay late and ask questions, challenging everything – I disagreed with so much of what they said.”

“I was completely opposed to religious people and their beliefs,” Zack said.

Yeshaya Coplon was also a member of Wilimington’s CTeen chapter, even though he lived 30 minutes away in Chester, Pennsylvania. Though from a religious home, he did not have the privilege of attending a Jewish school, as there was none nearby.

“Growing up, I didn’t have all the information,” Yeshaya said. “We kept Shabbos and Kosher, but there was a disconnect between the things we were doing and why we were doing them. Going to CTeens, I was finally getting all these answers. It was fun, and seeing others taking on more – seeing the change in them – inspired me to keep growing myself.”

The first CTeen Shabaton was a mind-blowing experience for the two boys. Hundreds of teens at various levels of observance had come from Australia, Ukraine, Florida and Manchester- all wanting to be there, all soaking up the energy and atmosphere. Yeshaya had been in Crown Heights before, but it was his first time being in the Rebbe’s room and seeing the Rebbe’s house.

“You hear all these stories of how the Rebbe helped and inspired people, but you never think about the fact that he lived somewhere that wasn’t 770,” Yeshaya said. “Suddenly, I was seeing his house- it was crazy!”

Zack, who had never been in Crown Heights before, was overawed by his hosts. “It was my first time being in a religious house; it was so shocking to us that these people would give strangers their code! They opened up their homes to us and were so kind, treating us as though we were their best friends, when we had actually never met them before!”

Seeing a religious home was a paradigm shift for Zack in other ways, too.

“I had always seen frum women as being inferior,” Zack admitted. “I saw them as being shy and always behind the scenes. But here, I was seeing the most confident, empowered women I had ever come across. It made a strong impression.”

Several shabatons later, in the summer of 2016, the three boys ended up together on the CTeen Heritage Quest, a three week trip to Poland and Israel.

“That trip was one of the most life-changing experiences I’ve ever had,” Yoni shared. “I’ve been putting on tefillin ever since, and trying to do more mitzvot. There was a community of brotherhood; even if we had little in common, there was a connection and true Ahavat Yisrael.”

For Zack, the Heritage Quest was the catalyst that finally had him making changes in his practical observance. He began wearing a yarmulke in school and bought a pair of tefillin. It was on the same trip that Yeshaya decided he wanted to go back to Israel for a year after high school.

The first picture you see was taken several months later at the 2017 CTeen Shabaton.

“Because our chapters were a lot smaller, we all took one bus up to Crown Heights,” Yoni said. “The Delaware teens came to us, and after stopping to pick up the teens in Buck’s County, we went all together to Crown Heights. It was the first time I reconnected with Zack and Yeshaya after the Heritage Quest.”

In the fall of 2017, Zack and Yeshaya went off to Israel to study at Mayanot, where they remained for the next two years.

“After 4 years of all of this inspiration, I decided that I needed to pursue it further,” Zack said. “I still didn’t know if I believed in G-d, but I knew I owed it to myself to at least explore the idea.”

Meanwhile, Yoni graduated high school and began studying at Drexel University in Philadelphia, where he is heavily active at the campus Chabad. “I’ve become close with Rabbi Goldstein and his family, and most of my friends at Drexel are part of the Chabad community,” Yoni said. “It’s really impacted my life for the better.”

After returning to America, Zack went to Los Angeles to learn at Ohr Elchonon and Yeshaya settled at Tiferes Bochurim in Morristown. The next time the three met up again, they experienced an interesting hashgacha pratis.

“I was chaperoning some boys from the Cherryhill group at this year’s Shabaton,” Yoni said. “It was close to Shabbos and I was rushing back to my hosts when I saw Yeshaya standing with Zack. We were excited to see each other and quickly snapped a selfie, which I sent to my mother.

“My mother happened to be going through some old photos, and found the picture from 2017 that we had all forgotten about. She made a collage of the two photos and sent it to me, and I was like, wow, this is so cool! We recreated this picture by accident!

“I sent it to some of the Rabbis and people from the trip, and next thing you know, we’re going viral,” Yoni laughed.

It’s quite fitting that these boys have become something of an icon for the impact that CTeen can have; for each of them, CTeen was a defining factor that completely changed the trajectory of their lives.

“CTeen was both a catalyst and stepping stone that helped facilitate my growth in Yiddishkeit,” Yoni said. “I have no idea where I’d be now without it.”