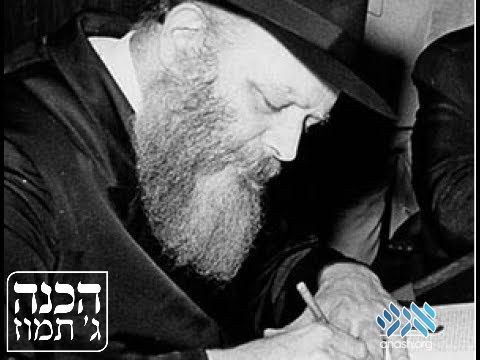 As we prepare for Gimmel Tammuz, we dedicate ourselves to strengthening our connection to the Rebbe. Much of what we know about the relationship between a Chassid and his Rebbe is gleaned from what our Rebbe said about his Rebbe – the Frierdiker Rebbe.

In this ma’aneh (handwritten response), regarding the court case over the ownership of the seforim in the Chabad library, the Rebbe describes, with clear and powerful language, what a Rebbe is.

In preparing the arguments for the case, the Rebbe referred to letters in which the Frierdiker Rebbe clearly expressed that the library was the property of the Chassidim. Responding to the claim that those letters were written in an effort to secure the release of those seforim from Poland and therefore could not be taken at face value, the Rebbe wrote:

The Rebbe, just as with all of the Chabad Rebbeim, taught, as a bedrock principle, the full and true negation of one’s selfhood (beginning with himself).

Being a Rebbe is his souls primary mission. His purpose in life is to guide and encourage others in Torah and mitzvos (starting with belief in Hashem, following the laws as written in Shulchan Aruch etc.) A Rebbe leads by example (even when doing so puts his very life in danger).

Certainly any action that might, even mistakenly, be interpreted as a violation of those principals is totally out of the question.

His personal life comes only after this primary mission and even then it may not, in any way, disturb his primary purpose.

The Rebbe went on to say that the idea that there was any dishonesty in the Friediker Rebbe’s letter is out of the question. It would go against the very essence of the Rebbe’s being. Therefore, these documents serve as proof to reject any claims that the seforim were the personal property of the Rebbe.

It is interesting to note that the letter referenced by the Rebbe weighed heavily on the judge’s decision.