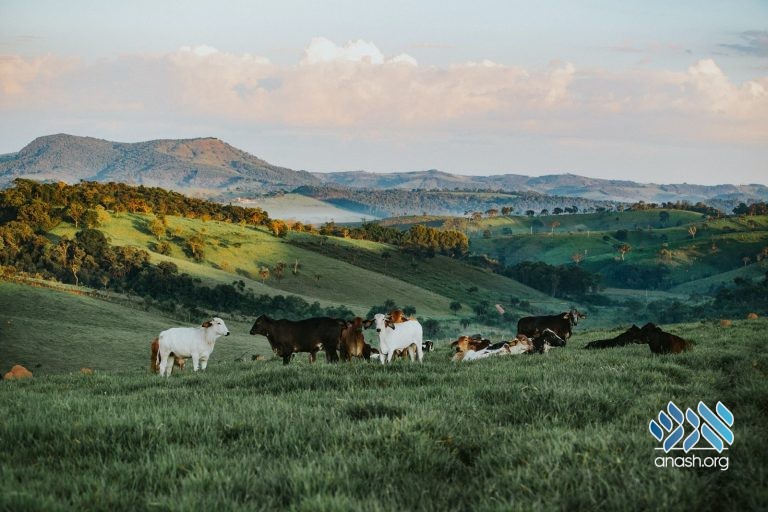 Motzei Shabbos Story: The cattle merchant approached Reb Levi Yitzchak of Berditchev for a solution for a problem with his cows. He gave him a remedy to stop bleeding.

There was once a Jew who traded cattle for a living. It was hard work, requiring long stretches of travel to trade fairs in distant cities, but the profit made it worthwhile. Healthy cows fetched higher prices, and the rancher would regularly rent pasture for the herd to eat and roam freely as they approached each new city. They rested and grazed, and after a day or two, the rancher prodded them along to the fair where, plump and agile, they sold nicely.

On one occasion, the rancher was unable to find pasture for his herd. Whoever he asked, refused. Rejections were par for the course, but this time, even when he expanded his search far beyond the lengths he normally went to, he continued to strike out.

Panic set in. If the cows weren’t fed properly after all the journeying, their thin frames would be overlooked on market day and he would suffer a heavy loss. Seeing that he was not far from the town of Berditchev, he decided to consult with the famed Rabbi Levi Yitzchak.

Standing before the saintly rabbi, he described his miserable plight.

“Dry rakvines,” said Rabbi Levi Yitzchak cryptically, “are effective for staunching the bleeding after a circumcision.”

Mustering up a hollow thanks, the rancher left the room feeling lost. It was as though the rebbe had ignored him and offered advice for a completely different person. He was a rancher, not a mohel. And rakvines were herbs, not something he had any use for in his line of work. Feeling even worse than he had earlier, he dragged himself back to Rabbi Levi Yitzchak’s desk and repeated the story about his starving cows, making sure to speak extra clearly, because he felt the rebbe must have misunderstood the first time.

“My dear heart,” boomed Rabbi Levi Yitzchak good-naturedly, “I already told you that dried rakvines are a remedy to stop the bleeding.”

Crestfallen, the rancher stepped outside, trying to think what to do next. He decided to continue his search for pasture. After wasting more precious time driving around, he came across a small inn at the side of the road. It belonged to a Jew, who seemed quite impatient when the rancher begged him for a place to pasture his herd. He brushed off the rancher, clearly preferring to be left alone.

The rancher studied the innkeeper. He appeared gaunt and pale, as if he had missed several nights’ sleep. “Do you need help with something?” asked the rancher, with concern.

“Yes,” the innkeeper said stiffly, “but nothing you can help with.”

At the rancher’s gentle insistence, the innkeeper’s resistance melted with a deep sigh.

“My wife gave birth to a baby boy,” began the innkeeper gloomily. “The brit milah (circumcision) is in two days, and I am absolutely terrified. We had a son before this one, just as healthy, yet when he underwent the circumcision, the wound refused to close. My son bled out and died. I fear this nightmare could happen again.”

Realization struck the rancher like a bolt of lightning. The herb!

“Don’t worry about a thing,” said the rancher, tripping excitedly over his words, warranting a strange glance from the innkeeper. “I know exactly what to do; I have no doubt things will end smoothly.” And he told the innkeeper about his seemingly strange encounter with Rabbi Levi Yitzchak.

“Do you have this herb?” asked the rancher.

The two immediately set off for the forest, and after combing the thicket, they found what they were looking for. They picked it and returned to the inn to leave it to dry. Somewhat composed now, the innkeeper turned to the rancher.

“Can you please repeat what it was you asked me for earlier? I was too distracted to listen…”

The rancher detailed his search for pasture once more. The innkeeper waved his hand dismissively. “Oh, that’s nothing. Consider it done.”

No time wasted, the innkeeper met with the duke who owned the local lands and facilitated the rancher’s request. It went as smoothly as he had hoped; the duke was thrilled to provide his fields for an easy earn, and before long, the rancher’s cows arrived, led by his herders. The rancher, however, stayed with the innkeeper—he was committed to seeing the circumcision through to its end.

The brit milah was performed, but, as anticipated, the wound refused to close and the mohel’s frenzied efforts did nothing to slow the bleeding. The innkeeper grabbed a handful of the rakvines he prepared and held it to the wound. The blood stopped almost immediately. The newborn was pronounced safe, and the crowded room, choked by panic, began to breathe again. What followed was a festive meal, bolstered by the miracle, celebrated by two new friends, all thanks to some holy advice for their now forgotten ordeals.