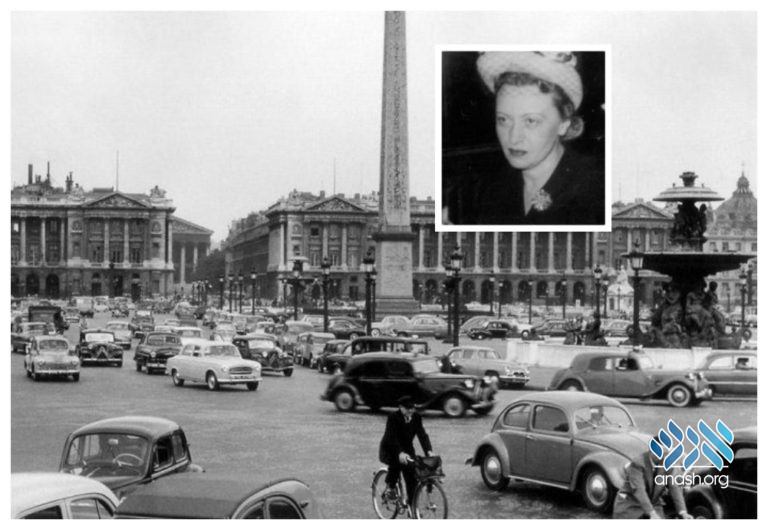 The Avner Institute presents anecdotes told by Rabbis Raphael Wilschanski and DovBer Junik about the Rebbetzin’s secret visit to Paris and memories that she shared.

Through her lifetime Rebbetzin Chaya Mushka, of blessed memory, masterfully avoided publicity and remained very much behind the scenes. Because of her accomplished reserve, during her brief visit to France in 1954, very few people there were even aware of her presence.

In fact, the only members of the Lubavitch community then living in Paris who knew about her stay were the administrators of Lishkah, the Lubavitch refugee aid organization. They had been notified of her visit by the Rebbe and briefly requested to provide any necessary assistance.

In order to assess the condition of the many Jewish refugees who were then living in Paris, the Rebbetzin made a clandestine visit to the city and stayed for several days. Although we had been instructed to provide as much assistance as possible, she hardly needed any. She stayed at a hotel and, apart from Shabbos meals, provided her own food.

During this time, I met twice with the Rebbetzin and had several short telephone conversations with her, during which she expressed deep concern for many Chassidim who were then living in Paris as refugees from the former Soviet Union. Having left the horrors of that regime with little more than their lives, many were suffering from dire poverty.

One group of 30 families was crowded into a 36-room hotel subsidized by the American Joint Distribution Committee. All of these families, some of which included many children, were compelled to share one kitchen. The Rebbetzin, deeply concerned, wanted to know every detail of how they lived.

Her compassionate questions were those of a mother for her children. One night, in order to understand the situation as fully as possible, she visited the hotel in secret. In total anonymity, she was able to observe their real living conditions.

Each of her questions was phrased with a care that revealed deep empathy. She also elegantly managed to avoid speaking about anything inappropriate.

The Rebbetzin’s mellow sensitivity was also in evidence when we spoke about the township of Lubavitch itself. It is difficult to describe the longing with which she described the home of her late grandfather the Rebbe Rashab, the students of the original Tomchei Temimim Yeshivah, and the atmosphere in Lubavitch before the rise of Communism forced the dispersal of his Chassidim. Her words sounded exactly like the words of some revered elder Chassid who himself had absorbed his Torah learning in that unique atmosphere.

The Rebbetzin conveyed a similar profound respect for her father of blessed memory, the Sixth Lubavitcher Rebbe, Rabbi Yosef Yitzchak Schneersohn (the Rebbe Rayatz). When mentioning the branches of Tomchei Temim that had opened in America following her father’s arrival, she remarked, “Only a giant like my father could have accomplished such a revolution!”

Only at one point did she briefly mention her husband, the Rebbe. Saying that during the few days of her stay she would have very little time for herself she observed, “If my husband had a little free time, by now he would have prepared a siyum [academic ceremony] to mark the completion of Tractate Bava Basra.”

She added that although it was close to Pesach, a particularly busy time of year, the Rebbe was somehow finding time to prepare a siyum for erev Pesach, a custom of firstborn sons on that day instead of fasting.

The Rebbetzin displayed the same concern for my family as she had toward the refugees. Whenever in later years I visited her in New York, she wanted to know about my children in detail, including their academic progress and their general activities.

Toward the end of one of those visits, I said, “May the Rebbe be healthy and derive much nachas [satisfaction] from us.”

To which she replied simply, “We have nachas when we hear you have nachas.”

“As Though it were Yesterday”

Regardless of the many years that have passed since then, I remember the whole episode of the imprisonment of Yud-Beis (12) Tammuz of my father Rabbi Yosef Yitzchak Schneersohn [Rebbe Rayatz] as though it were yesterday.

At the time of my father’s arrest – in 1927, in Leningrad – my husband accompanied me home. We could see that the whole house was lit up.

I entered, my husband remaining outside. A few moments passed, and I peeked out the window.

“We have guests,” I whispered.

At once my husband went to the house of Reb Chaim [Lieberman, the Rebbe Rayatz’s secretary].

“Guests have arrived at the Rebbe’s,” he told him.

My husband did not approach any embassy to inform the outside world about the arrest.

Immediately afterward, policemen swooped down on the house to arrest Reb Chaim. During the interrogation, when the investigator briefly stepped outside, Reb Chaim swiftly pulled out an incriminating letter from the papers stacked on the desk and swallowed it.

So many tales are told that never really happened. Within five minutes of the arrest, Chassidim were already huddled at every nearby street corner to see what would be. No one knew which direction the NKVD car holding my father would take.

At our wedding the attendants accompanying me under the chuppah [canopy] were my father and mother; the attendants of the groom [the Rebbe] were Reb Moshe Hornstein and his wife Devorah Leah [daughter of the fourth Lubavavitcher Rebbe, the Rebbe Maharash], the sister of my grandfather [the Rebbe Rashab].

What was their relation to the Rebbe? I don’t know.