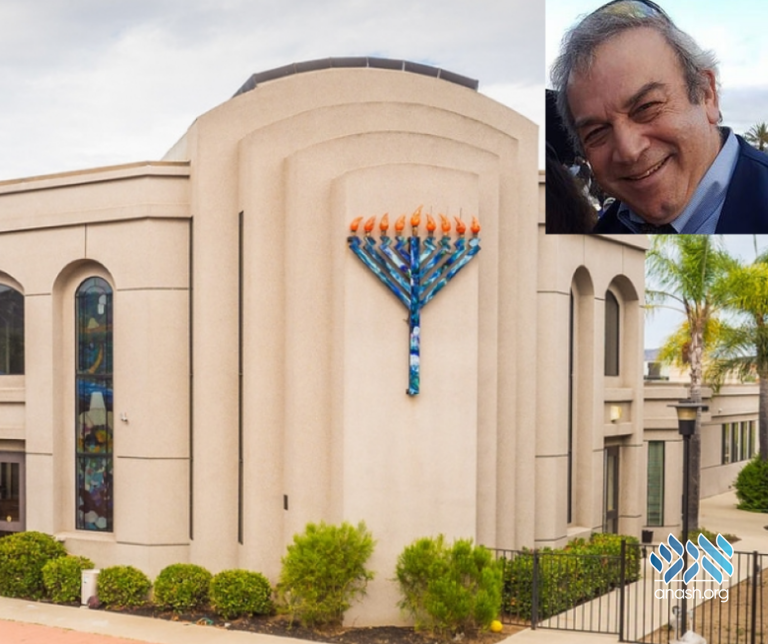 Three Months After Shooting, Lori Kaye’s Husband is ‘Fighting to Prevent the Next Poway’.

In a Newsweek op-ed last week, Dr. Howard Kaye, who lost his wife Lori Gilbert-Kaye HY”D to a gunman’s bullet on Acharon Shel Pesach at Chabad of Poway, Calif., shared with the world for the first time since the tragic shooting the depth of his grief and his resolve, and sought to prevent similar tragedies by calling for the re-education of society on the “basic laws of human civilization.”

The harrowing trial of the rheumatologist began at the scene of the shooting in Chabad of Poway’s synagogue lobby, where he desperately attempted to revive one of the shooting victims, passing out upon realizing it was his own wife, Lori Gilbert-Kaye. His searing article reveals how a book that focuses on consolation and advice for the bereaved from the Lubavitcher Rebbe was the last book his wife purchased, and that is now helping him through his own mourning process.

“Not many know that Lori came to synagogue that morning to pray for the soul of her mother, who had passed not long before,” Kaye writes in the July 26 edition of Newsweek. “Throughout her own grieving, she sought solace in the Rebbe’s teachings on coping with loss. Lori was an avid reader. The very last book she bought before her brutal murder was A Time to Heal: The Lubavitcher Rebbe’s Response to Loss and Tragedy. She never had a chance to read it.

“As I work towards solace and healing through long days and lonely evenings, I find myself reaching for Lori’s book, still on her nightstand,” he continues. “Even in death, my loving, caring Lori anticipated my needs and prepared these comforting teachings. It’s almost as if she’s reading them by my side.”

The best-selling book, released in October 2015 and written by Rabbi Mendel Kalmenson, co-director of a Chabad center in the Belgravia section of London, has just been reprinted for the third time this week.

Kaye’s editorial appears three months after the Poway shooting, which took place on the last day of pesach, taking the life of the 60-year-old Lori Kaye, indelibly injuring the synagogue’s founder, Chabad emissary Rabbi Yisroel Goldstein, who lost a finger in the incident, and leaving two other congregants, a young girl and her uncle, injured.

Kaye invoked the theme in his editorial that the circumstance must be used for teaching and for good, ultimately to take down darkness with light.

Amid the “agony of Lori’s funeral, the ensuing shiva period [Judaism’s seven days of mourning] that followed and the many unbearable days and weeks that followed,” Kaye writes in the Newsweek piece, “one central teaching of the Rebbe has kept me going, motivating me to keep telling myself: “I was placed in this unfathomably challenging situation for a purpose and I’ve been given the strength to overcome it.”

“While Judaism does not provide explanations for such tragedy,” the Rebbe taught, “it does have a response. He [the Rebbe] urged that our response to humanly-inflicted tragedies be to take concrete steps to improve the moral state of society, to uproot the underlying causes of such moral depravity.”

As a specific remedy, Kaye refers in his article to the Rebbe’s emphasis on the dissemination of the Seven Noahide Laws, ably defining them in his editorial as “the universal code of ethics predicated on the appreciation of a Supreme Being in whose image we have each been created, who cherishes each of our lives dearly, and to whom we are each beholden and responsible.”

“Each time a murderous, twisted individual commits a crime of hate, the urgency to educate society about the basic laws of human civilization grows,” Kaye wrote. “It holds the potential to stop the next atrocity.”

Kaye winds down the article on a more emotional note, adding: “In trying to understand the root cause of the atrocity that took Lori’s life and, even more urgently, in seeking to prevent the next Poway from occurring, it became clear to me that Lori’s killer was motivated by anti-Semitic hatred. His was a convoluted and reprehensible mindset that perverted his morality and convinced him that some people were worthy of life—and others were not.”

“My wife, Lori, was the kindest, gentlest person I’ve ever known,” he writes. “I often felt she may have been one of the 36 righteous people that Jewish tradition teaches uphold the world.”