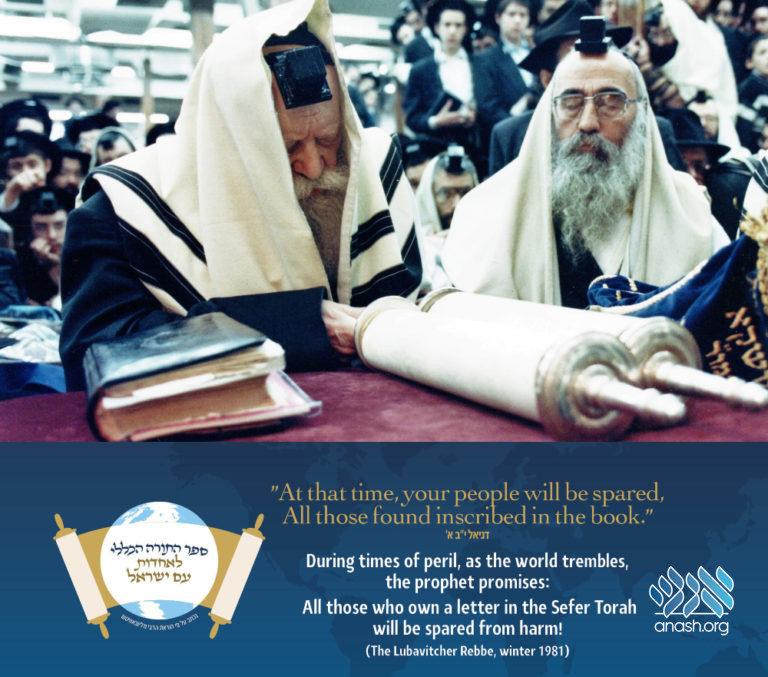 In 5742 [1982] the Rebbe asked that Sefer Torahs should be written for Klal Yisroel and said that having a letter in the Sefer Torah will be rescued from any harm.

“At that time… your people will be rescued, all who are found inscribed in The Sefer”

The Rebbe quoted a Passuk in Daniel ‘At that time, Your nation will be saved – all those who are written in the Sefer” and explained that this Passuk was referring to those who participate in The Unity Torah.

In 5742 [1982] the Rebbe asked that Sefer Torahs should be written for Klal Yisroel and that each and every Jew should acquire a letter in these Sefer Torahs.

The Rebbe then went on to say that “The Sefer” refers to Sefer Torahs that will be written for Klal Yisroel in which each yid should have a letter in it, and consequently “At that time, your people will be rescued, all who are found inscribed in The Sefer”.

Now, the world is trembling and times are uncertain due to the terrible disease that is plaguing our community, and the world. It is urgent and extremely important that every yid should have a letter in this Sefer Torah Klali.

Since the launch of both the Children’s Sefer Torahs and the Sefer Torahs Klali (not limited to children) a total of 14 scrolls have been written and a 15th is currently in progress. Two thirds of the 15th Torah have already been completed. A Sefer Torah has 304,805 letters!

Recently, the Unity Torah Committee launched a brand-new platform to streamline the acquisition of the Unity Letters.

This Torah is for Jews of all ages. (Letters may also be bought in memory of a relative who has passed.)

Visit: www.Unityletter.com to acquire your letters and for more information. As all proceeds go directly to Tzedaka, you decide the price!

Additionally, for children under Bar/Bas Mitzvah, it is imperative that they acquire a letter in the Children’s Sefer Torahs. (see Kidstorah.org)

Give your friends and family the awesome Zchus of a letter in the Sefer Torah Klali that the Rebbe held so dear.

For more information, and to receive beautiful educational resources to pass along, reach out to: letterunity@gmail.com.