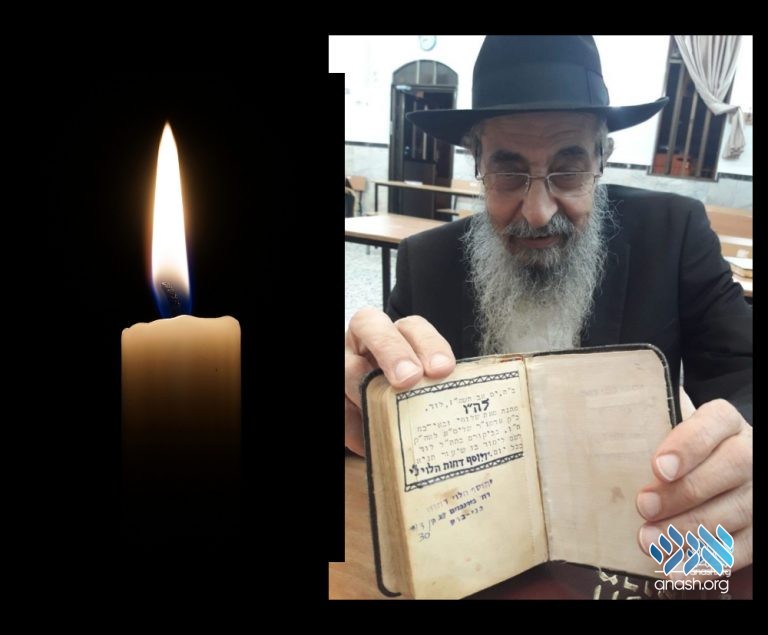 Reb Yehosef HaLevi Dachoch of Bnei Brak passed away today. He was 80 years old and had no children. For decades he kept a small Tanya that he received as a child from the Rebbe’s shluchim.

He was one of the chashuvei anash in Bnei Brak. A man who was dedicated to the Rebbe’s inyonim with all his soul. A regular “activity” of his was to go out on mivtzoyim to neighboring Petach Tikvah with Reb Moshe Greenberg of Bnei Brak, or on bikurei bayis to neighboring Givat Shmuel.

For 30 years, he taught at the Sanzer cheder in Bnei Brak, beloved by all children.

Born in Yemen and arriving in Eretz Yisroel as a child, he was a talmid of the Lubavitcher Yeshiva in Lod, where so many other Yemenite children were welcomed. After the massacre at the Beit Sefer L’Melacha in Kfar Chabad in 5715/1955, he received a Tanya as a gift from the ten shluchim who visited the village on the Rebbe’s shlichus. The idea was that he learn the daily shiur Tanya every day from this sefer.

In the photo below, Reb Yehosef proudly displaying the very well used Tanya he received at the time. It seems that he used it as he was supposed to.

He is survived by his wife, Mrs. Simcha Dachoch, but unfortunately never had children.