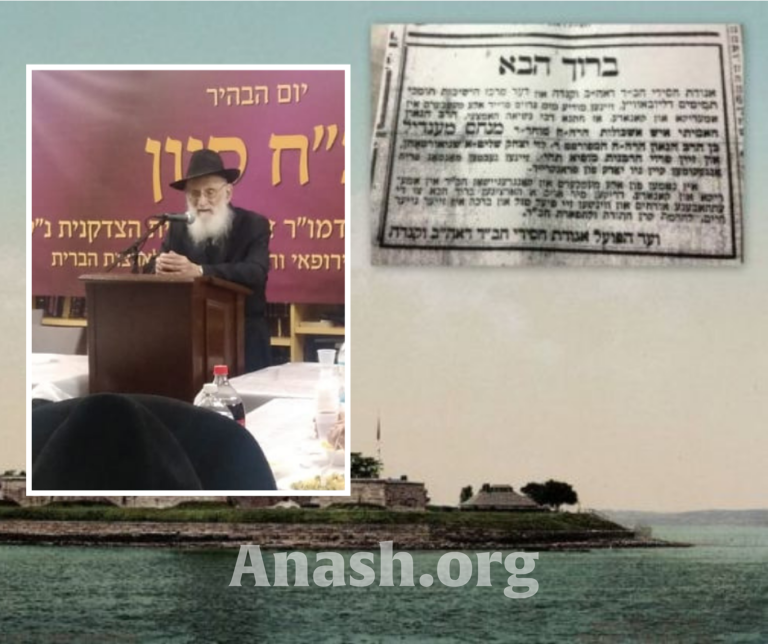 Rabbi Leibel Posner, who was present when the Rebbe entered 770 for the first time, shared his memories of Chof Ches Sivan.

Tens of anash, bochurim and shluchim, gathered near the Rebbe’s Ohel to mark the day which the Rebbe and the Rebbetzin were saved from the upheavals of the Holocaust and arrived in America bringing to a renaissance of Torah and Yiddishkeit throughout the world.

For decades the exact date of this event was actually unknown to the general public. But in 5746 following the printing of the Igros Kodesh of the Frierdiker Rebbe, a letter was found making clear reference to this date. Rabbi Meir Harlig then submitted a bottle of mashke for the Rebbe to give him during the Farbrengen on Shabbos for a 28 Sivan farbrengen. When Rabbi Harlig announced about the farbrengen saying that it was to mark the day the Rebbe came to America, the Rebbe corrected, “ish ubeiso”, making mention that he had come together with the Rebbetzin.

At the farbrengen at the Ohel, Rabbi Leibel Posner shared his memories of seeing the Rebbe and Rebbetzin enter 770 for the first time – seventy eight years ago. He was a young bochur at the time, and his class was held in what is now the mazkirus office in 770. When the Rebbe and Rebbetzin came all of the bochurim went out to give the Rebbe “sholom aleichem.”

Rabbi Posner also shared his recollection of the Rebbe’s first farbrengen on American shores, on Rosh Chodesh Tammuz 5701/1941. The Rebbe farbrenged for six hours straight sharing deep explanation from all different areas of Torah, Nigleh, Chassidus and Kabbalah. Rabbi Posner had turned to Rabbi Herschel Shusterman, then one of the older bochurim in 770, saying that he could not grasp anything of what the Rebbe is saying. Rabbi Shusterman told him not to worry since he couldn’t comprehend it either.

The second speaker was Rabbi Shamai Ende, Rosh Yeshivah of Yeshivas Lubavitch S. Paulo, Brazil, who spoke of the need to connect every Jew to the Rebbe, especially by encouraging them to visit the Ohel. Every year Chabad in Brazil organizes a large trip of over 400 Jews from all walks of life to come to the Ohel for Gimmel Tammuz, and this trip brings an amazing effect and many brochos. Rabbi Ende ended off passionately expressing the hope that very soon we will be reunited with the Rebbe in the Geulah.