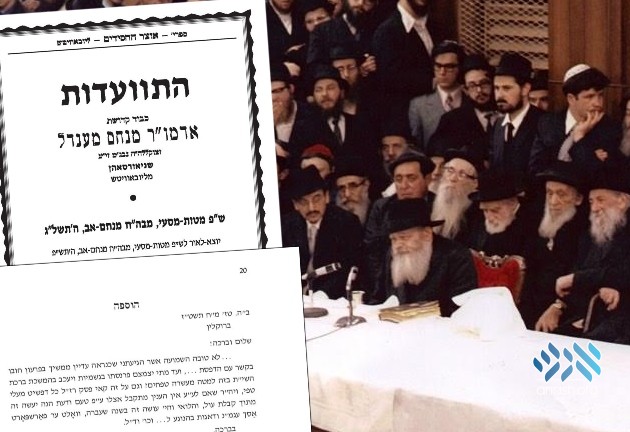 As we navigate the current epidemic and resulting economic crisis, Lahak releases a new letter in their weekly Hisvaadus booklet where the Rebbe associates one individual’s economic scarcity with a “spiritual debt.”

The Rebbe opened the Farbrengen by noting the contrast between a popular non-Chabad custom for Shabbos Mevorchim Av to minimize joy, and the Chabad tradition to ensure that no change is made and to even increase in joy. The Rebbe also connected the theme to the weekly sedra, and explained a lesson that every Jew could learn from this kvius.

After a Maamar, the Rebbe delivered a Sicha on Rashi, which dwelled on the topic of Nedarim. The Rebbe raised an explanation he had proposed several years earlier, but said that it wasn’t adequate. “It is surprising,” the Rebbe said, “that although seven years have passed, nobody ever raised the issue.”

When discussing his father’s Torah, the Rebbe shared a point which he would repeat many times: “Due to constraints of paper and ink, my father was forced to be very concise in his writing. He relied on the student to understand the rest himself…”

Towards the end of the Farbrengen, the Rebbe announced:

“Being that wine and meat etc. are still permitted tomorrow, a ‘continuation Farbrengen’ should be held with a shturem, and this should break through all barriers, including the last barrier to Moshiach’s arrival.”

Saying that, the Rebbe gave his Mezonos and wine for the Farbrengen, expressing his blessing that it be “with joy and goodheartedness.”

As per the Rebbe’s custom, a hosafa is included in the publication: a new letter recently discovered by Lahak, dated 16 Cheshvan 5716.

The Rebbe’s words are uncharacteristically sharp:

“I heard the unpleasant news that you are still paying off your obligation to sponsor the publication of….  Until when will you constrict your physical parnassah . . and hold back Hashem’s blessing?”

“…Even if it isn’t something you understand, may Hashem help you do it out of Kabolas Ol. If you would have only done so last year, you would have saved yourself much heartache and worries regarding… vedal.”