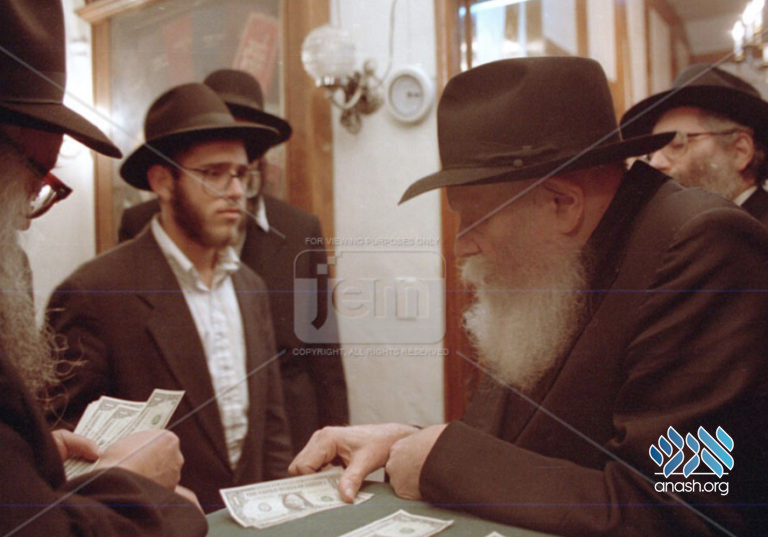 From a very young age, my father taught me and instilled in me that the Rebbe was our life. Nothing was done without the Rebbe’s clear directive and blessing. Our lives totally revolved around the Rebbe. When the Rebbe asked that something is done, it was done immediately and automatically without question. If the Rebbe was speaking, we were listening. Even as very young children, we stayed up till two or three in the morning to listen to the farbrengens via live hookup or on satellite TV.

We traveled to New York often to see the Rebbe and be in his presence. From a very young age, I was enamored by the Rebbe like most young Lubavitcher kids. However, when I came to New York to go to Yeshiva in the summer of 1987, I became glued and not able to tear myself away. I rarely went home, I would not go to camp unless I was able to come in every shabbos for the Farbrengen. I was totally consumed.

We lived from week to week with the Farbrengen from the last Shabbos. The Rebbe was our entire life. There was nothing else. We did not want anything else, we did not need anything else. We were members of the most exclusive club. The Rebbe’s wish was our command. We were soldiers and the Rebbe was our general. We did not miss a davening, or a sicha or ‘dollars’. We were there until the very last second of every five-hour Chaluka of every kovetz. There was nothing more important than being in the Rebbe’s presence and doing what the Rebbe wanted us to do.

In 1992, the Rebbe sent us on shlichus to the yeshiva in Boston. We came in for Shabbos at least once a month. By divine providence, we came in for Shabbos Parshas Vayakhel, Chof Hey Adar 5752 (1992). On Sunday night, I davened Maariv with the Rebbe’s Minyan upstairs in the small zal. I was actually so close to the Rebbe, that I davened from the Rebbe’s siddur. During Maariv, the Rebbe was stuck on a line in Ahavas Olam for about five minutes. I remember Chonne Perman asking me after Maariv, what happened. That may have been an early warning sign of what would happen the next day.

We went back to Boston on Sunday night. On Monday evening, Chof Zayin Adar, we started getting the calls and the texts and the confusion and disbelief started to set in. Around 8:30 pm my cousin in Hatzalah confirmed what no one was openly saying in Chabad circles. The unbelievable and the impossible had happened, the Rebbe had a stroke.

I immediately begged my friends to rent a car and drive me to New York. I did not have a license and was at their mercy. No one was willing to drive me. Early the next morning, I took the “T” subway to the airport and took the first flight to New York.

When I arrived, people were walking around in a daze. There was no manual for this. Noone had any idea what they were supposed to do. People were holding Tehillim’s but most were too numb to even say any Tehillim. We split up into groups to always have one group at the Frierdiker Rebbe’s Ohel 24 hours a day. My shift was at 4:00 am. It was eerie and spooky. There were no lights there, so we used the car headlights and flashlights to see. We poured our hearts out and said Tehillim. From the car, we listened to the sicha of the Rebbe about Mrs. Pesha Leah Lapine’s Hy”d horrific murder.

Hours turned into days. Another MRI truck, more doctors, more misinformation. More confusion more anxiety. People dancing, people crying. It was as if the world froze on Monday night and even though it was already Thursday night, it seemed like nothing had changed in all that time.

Days turned into weeks. I went back to Boston for a few days after my father begged me to. However, I just could not stay there. I picked again and went back to 770 and never returned to Boston again. Nothing made sense anymore. Everything we believed in was just shattered. How was it possible that the Rebbe who was our majestic, mighty leader and father could no longer walk or talk or even move his hand? The Rebbe was our everything. The Rebbe was why we woke up in the morning. I felt like my whole life was just utterly destroyed and I had nothing left. No belief system, no faith, no hope. There was just utter despair.

I moved into the Chotzer for the next two years, just hoping to hear something or see something. Just to be close by. We talked to every doctor, every nurse, and every Mashbak. We watched the lights go on and go off. What was brought into the Rebbe’s room and what was brought out of there.

The next two years were to be the most agonizing and anxious time in my life. There were the ups and the downs: Seeing the Rebbe for the first time since Chof Zayin Adar was after Tahalucha on Shavuos, seeing the Rebbe coming into the box in Shul, when they opened the blinds on the window and then on the balcony, the Rebbe being brought down into the shul on Sukkos, the Rebbe being rushed to the hospital for emergency gall bladder surgery, spending a Shabbos with the Rebbe in Mount Sinai Hospital, watching the Rebbe in obvious discomfort and pain, Seeing and knowing how all those who were working with the Rebbe had lost all reverence, hearing the Rebbe screaming in pain in his room night after night all the way in the Zal…

The really sad and painful events of those two years can never be told. They are just too painful and just not respectful to talk about.

Then came the ultimate slap in the face. Another massive blowout stroke on Chof-Zayin Adar exactly two years to the day after the first one. I was in Los Angeles for a wedding when I found out. I was told that the situation was terrible and to get to New York right away. Again running to the airport, trying to get on flights. That was definitely the worst day of my life. Not knowing what was going on and being out of touch and fearing the worst. Again the confusion and distress all over again. Moving into Beth Israel hospital for weeks and then months on end.

Chof Zayin Adar is a terrible, terrible day. A day that should bring uncontrollable tears to everyone’s eyes. A day that should make us stop and think about what we have missed for the past 27 years. How much we miss the Rebbe. We need to think about how the Rebbe suffered in pain for two years. Sometimes we need to stop and just be sad for a few hours. There is a time for everything. Chof-Zayin Adar is a time to reflect, and yes, be somber for a few hours. Hopefully, thinking about the Rebbe will bring us even closer to the Rebbe and will help us to continue to fulfill the holy mission he gave us.