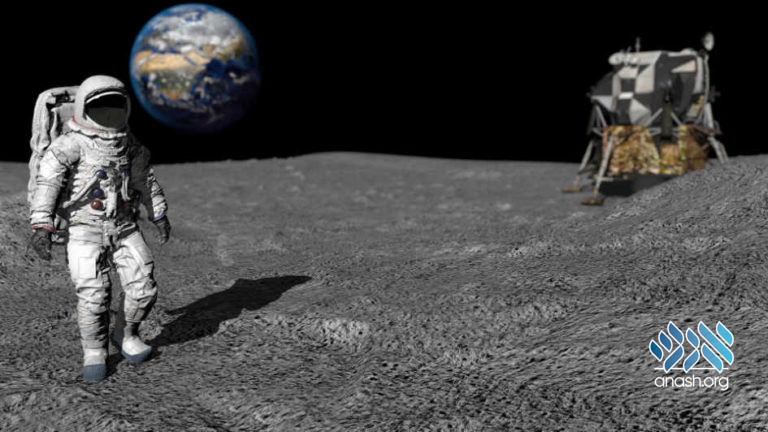 3D rendering. Astronaut walking on the moon. CG Animation. Elements of this image furnished by NASA

On June 20, 1969, I was old enough to follow the moon landing down to the detail, but still too young for cynicism. I collected every magazine and newspaper article I could find on the topic. But what stands out in my memory the most was the mood in the air. Despite the civil unrest in America and the war in the Far East, it was next to impossible to escape the sudden boost of pride in this masterful achievement of humankind.

The biggest cynic wouldn’t have said President Nixon was over-the-top when he called that eight-day journey “The greatest week in the history of the world since the creation.”

The principal goal of the lunar landing was originally a political one. America desperately needed to boast technological and military superiority after the embarrassment of stunning Russian space-travel successes with Sputniks carrying dogs, men and women above their heads. But the sum result for much of the world was a tremendous boost of confidence in the capacity of the human being.

From the get-go, many well-informed people were certain that a journey of this sort was impossible, never mind the landing. And it was—given the state of technology when JFK announced the initiative less than a decade earlier. There wasn’t a single computer at the time that had anything near the computing power of the dumbest smartphone today—and we’re speaking of mammoth machines the size of several refrigerators. NASA and MIT made huge strides forward in a very small amount of time, creating a computer small enough to fit on board, and operable by those who needed the data—practically a miracle for those days.

In England, the famous bookmakers and bet-mongers, William Hill, allowed odds of 1,000 to 1 in 1964 “for any man, woman or child, from any nation on Earth, being on the Moon, or any other planet, star or heavenly body of comparable distance from Earth, before January, 1971.” NASA itself wasn’t much more optimistic. The Apollo systems architecting team under Joseph Shea (hailed as “one of the greatest systems engineers of our time”) estimated that if everything went at least twice as well as in preceding tests, 30 astronauts would be lost before three could return home safely. A later probabilistic risk assessment conducted by NASA gave success a 5% chance.

NASA’s administration concluded that if the results were made public, “the numbers could do irreparable harm.” From that point on, NASA stayed away from numerical risk assessment.

So when that “small step for a man” actually left its footprint, there was a giant leap of pride and confidence in humankind, greater than anything ancient Athens had imagined, far further than even the Age of Reason had taken “man as the measure of all things.”

This wasn’t just measuring and understanding things—this was actually getting in a spaceship and traveling there. A tiny little organism, less than a speck of dust from the cosmic view, builds a ship with which it can do what no planet or star can do: break out of its protective shell, travel to another celestial orb, and come back home safely with souvenirs to boot.

To many, it seemed the height of the humanist idea—and the demise of theology. G‑d was dead in a sense that Nietzche couldn’t have imagined, and Man had replaced him gloriously.

At two public gatherings (“farbrengens”), one on the Shabbat following the first manned lunar orbit and one the day after the manned lunar landing, the Rebbe explicitly raised this assertion and examined it. As usual, his reaction was atypical of rabbis or of religious leaders in general. There was no denial of the event’s significance, no comment on the pointlessness of the mission or complaints that similar efforts were not made toward social welfare. Not what anyone may have expected, yet a typical kind of Talmudic turnabout.

Yes, he concurred, the human being has performed something magnificent. There is much in which to take pride. But does that make us so large as to displace G‑d? Just the opposite! We only know the greatness of the Creator from the greatness of His creations. Now that we see He has created a being that is capable of such creative ingenuity, how much greater must be the One that formed this creature and endowed him with intellect!

At the same time, the Rebbe continued, we have also provided ourselves yet more reason to be humble: If so many brilliant scientists could be so wrong about the impossibility of space travel and a moon landing, how many more of our current estimations are also wrong?

And then another perspective: When we want to see the greatness of the Creator, we lift up our eyes to the heavens, as the verse goes, “Raise your eyes heavenward and you will see: Who created these?!”

If from down on the ground looking up we can attain such enlightenment, all the more so when we can view the stars and galaxies—and our own planet as well—from beyond our atmosphere. And from that view of a vast creation, we step up to an entirely new level of conception of the infiniteness of its Creator—as well as our own smallness before Him. Now we can look down upon ourselves and see how small we are within this unimaginably immeasurable expanse of a universe, which itself is truly and absolutely nothing before the reality of its Creator.

All as Maimonides wrote in his code 800 years earlier:

What is the path to attain love and fear of G‑d? When a person contemplates His wondrous and great deeds and creations and appreciates His infinite wisdom that surpasses all comparison, he will immediately love, praise, and glorify Him, yearning with tremendous desire to know G‑d’s great name, as David stated: “My soul thirsts for the Lord, for the living G‑d.”

Yet as he reflects on these same matters, he will also immediately recoil in awe and fear, appreciating how he is a tiny, lowly and dim creature, standing with his flimsy, limited, wisdom before He who is of perfect knowledge, as David stated: “When I see Your heavens, the work of Your fingers, I wonder, ‘What is man that You should mention Him?’ ”

If so, there should be no generation that appreciates the greatness of the Creator and the smallness of the human being more than our own.

There’s a lot to learn from the Rebbe’s reaction. For one, the embrace of technological advance as a path to the divine is something that many spiritually-inclined people today continue to balk at. Yet that was an underlying theme of not only these two talks, but of many others.

But here’s my personal, humble take-away: It’s good to know that there’s no need to self-deprecate or even minimize your own achievements. After all, it’s not like G‑d became any smaller because you just got bigger. On the contrary, our personal achievements, just as the achievements of humanity as a whole, allow us a greater understanding of the world in which we stand, and therefore of the Creator who stands behind that world in its every detail and every moment.

Cynicism never led to greatness, and neither has false humility.