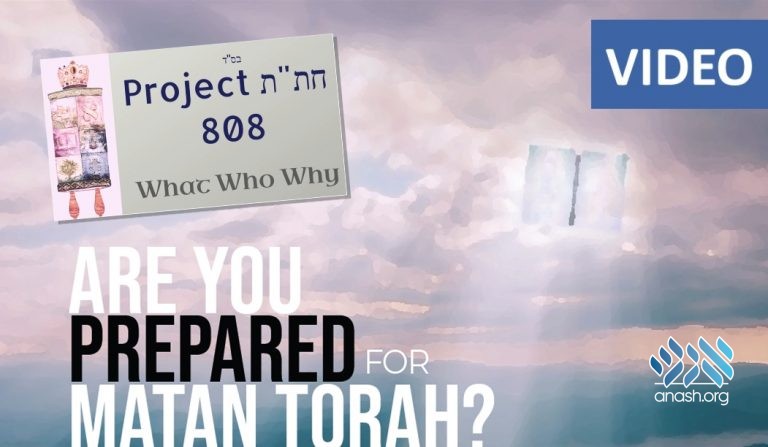 Project Chitas 808, launched by Rabbi Yechiel and Mrs Sheyna Marozov, aims to encourage the study of Chitas in communities outside of Lubavitch.

Rabbi Yechiel and Mrs Sheyna Marozov, creators of A Pure Headstart and Jewish Fingerplay, have embarked on an ambitious new project – to encourage Jews in other communities to start learning Chitas.

Titled Project Chitas 808, the campaign aims to inspire 808 Jews to begin daily shiurim and is being promoted in both Litvish and Chassidishe circles. The project features a complete synposis of Chitas, compiled into a video by Mina Zalmanov and describes the makeup of Chitas as well as its tremendous accomplishments.

Included in its advertisement are links to Chayenu, Chitas for Kids and Dvar Malchus, as well as 40% off purchase of a sefer Chitas at Kehot.com and 20% off subscription to Chayenu.

The campaign has been prominently advertised in frum news sources, including YeshivaWorldNews and the Williamsburg Bulletin, but the organizers point out that its success depends on our own community’s efforts.

“We want as many Yidden possible to learn chitas,” Mrs. Marozov told Anash.org. “The only way it will be a success, is if Chassidim call Yidden one by one and encourage them to start learning Chitas.”

On Shabbas Parshas Pekudei 5727 (1967) the Rebbe said: “When Moshiach comes, he will demand a factual statement: ‘List for me on a piece of paper — How many Jews did you influence to study Chitas?'”

Watch the video below and share with family and friends to get them on board!

New recruits to the study of Chitas can email chitas808@gmail.com to be mentioned for a brocha at the Rebbe’s Ohel.


The following is the campaign’s full text. Feel free to share!

If we were to advertise a book that saves lives, heals, and opens Heaven’s doors to our most fervent prayers, Chitas sales would be brisk indeed.

Each era is born with its own spiritual key, a particular observance or practice that serves more than all others as the gateway through which a generation travels. The Lubavitcher Rebbe unwaveringly insisted that in the modern era, the security and success of individual Jews as well
as our collective Chitas daily learning.

(To this, the Rebbe later supplemented a daily serving of Rambam’s Mishneh Torah, which details all the laws of the Torah).

Yes, this brief daily study initiative emerged from the holy mouths of the Rebbes of Chabad, but these spiritual giants made it abundantly clear that the daily undertaking is the legacy of all Jews.

1. Chitas is a Hebrew acronym formed by three letters the initials of Chumash, Tehillim, and Tanya.

2. The daily study cycles of the three books.

3. A single volume entitled Sefer Chitas which contains the Chumash, Tehillim, and Tanya.

4. The word Chitas is also taken from the verse “And the Chitas – fear – of Hashem was upon the cities that were around them, so that they did not pursue Yaakov’s sons” (Bereishis 32:5).

Tehillim is divided in a monthly cycle, in which only a few chapters are read each day and the entire book of Tehillim is completed on the final day of each Jewish month.

The Tanya was authored by the first Chabad Rebbe, Rabbi Shneur Zalman of Liadi (1745–1812). It is the main work of Chabad philosophy, in which the fundamental teachings of Chassidism are given systematic intellectual structure, with the goal of providing a universal guidebook that each Jew can use to navigate his spiritual path and advance in his personal service of G-d.

Tanya is divided into daily portions, so that it is studied over the course of a year. The cycle is designed to begin anew annually, on the nineteenth of Kislev.

“The daily studies as they were arranged for daily [learning] — the chapters of Tehillim, Chumash with Rashi, and the lesson in Tanya — vitally concern the soul of every single person”

Rewards and Benefits of Chitas Study

Source of blessing for a great many matters

I would like to use this opportunity to encourage you to observe the three well-known study schedules of Chumash, Tehillim, and Tanya, which my esteemed father-in-law the Rebbe told us about on numerous occasions. These schedules apply equally to all, and they are a Segulah [spiritual remedy] for a great many matters.

Concerning that which you write about simple faith. It is explained in Seforim (Holy Torah books) that [simple faith] is found, in complete form, by every single Jew – and every Jew is called a son of Avraham, Yitzchok and Yaakov, or a daughter of Sarah, Rivkah, Rachel and Leah – it is only that the evil inclination sometimes bombards the mind and tries to mislead a person into thinking otherwise, and sometimes the

opposite…. And to combat this… observe the well-known three [daily] study schedules of Chumash, Tehillim and Tanya.

… you requested a blessing for healing from an eye disease, and for your wife. When I will be at the resting place of my esteemed father-in-law the Rebbe, I will mention both of you for healing. I hope that you will be able to report good news to me in this matter. Each Jew must fashion vessels in which to receive G-d’s blessings. Therefore, if you have not done so until now, you should now begin reciting Tehillim each day – the portion of Tehillim that was allocated for each particular day of the month, so that the entire Tehillim is completed during the course of a month – and also studying the daily portion of Chumash, so that the Sedra is completed during the course of a week.

It is astonishing that your entire letter fails to mention a word about that which forms the channels of livelihood for each Chassid… namely, a fixed schedule for the study of Chassidus (together with friends, if possible, but at the very least on your own). Naturally, this comes in addition to observing the study schedules that apply to everyone equally, namely, the daily Tehillim, Chumash with the commentary of Rashi, and Tanya …

I received your letter… in which you ask for a blessing concerning your difficulty falling asleep and your anxieties, and you ask me for a suggestion. In my opinion, you must totally cease from thinking about this…and you should resolve to commit, without a binding promise, to fulfill the directive of my father-in-law to say Tehillim daily after morning prayer, as apportioned for the days of the month… and also see that not a day goes by that you do not learn at least some verses from the week’s Torah portion.

English: Give yourself or a friend a gift of Torah inspiration- Subscribe to Chayenu 20% off promo code: 808