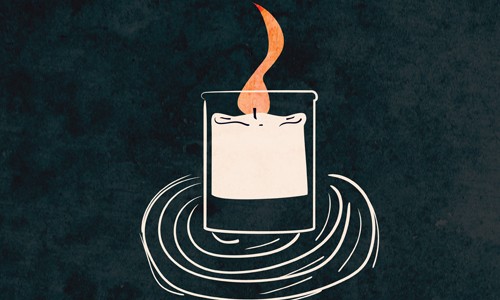 The coach rattled down the road through the heart of the forest, swaying gently in the horses’ wake. Dark, thick trees formed a canopy over the track, and animal howls rang out every so often. The pair of Chassidim sitting inside barely noticed the hardships of travel; their minds were focused on their upcoming reunion with Reb Baruch of Mezhibuzh—their Rebbe—and they could think of nothing else.

Something bright caught their attention, and they asked their driver to stop for a moment. Creeping through the brush to investigate, they discovered, to their surprise, a lone candle in a clearing, burning atop a small matzeva inscribed with the following:

Who battled his desire

Even greater than Yosef Hatzadik

The Chassidim stood dumbstruck. Finding no further clues, they marked a neighboring tree and resumed their journey.

When they arrived in Mezhibuzh, they told Reb Baruch about the strange matzeva in the forest.

“I want to see this with my own eyes,” said Reb Baruch, who eagerly followed his Chassidim to its location.

Reb Baruch examined the small slab before setting off in the direction of the nearest village. Accompanied by the two chassidim, he scoured village after village in search of someone who may be able to shed light on the puzzling headstone.

“There is an old fellow in such-and-such a village who might know something about it,” they were told.

Heartened by this small lead, the group hurried to the old cottage where a wizened gentile lay in bed under a heavy quilt. Seeing the visitors, he propped himself up and squinted at them in the gloom. The sight of Reb Baruch turned his confusion into a disbelieving grin.

“You’re Srulik’s grandson!” exclaimed the man, using the nickname by which the Baal Shem Tov was known among the non-Jewish peasantry. “What are you doing here?”

Reb Baruch described the small matzeva and his hunt for its backstory.

“It seems that the time has come for me to tell the story,” said the man dolefully. “This happened many years ago. In my village, there lived a wealthy landowner who employed the services of the tailor from nearby Mezhibuzh. Whenever his wardrobe needed mending, he sent for Moshe, the tailor’s apprentice. The young man would come to the landowner’s mansion, spend a few days there sewing, and then return home.

“The landowner paid attention to Moshe’s fine and diligent character and found him to be an attractive choice for his daughter who was of marriageable age. Using the pretext of needing fresh repairs, the landowner and his wife summoned Moshe to the mansion. Suspecting nothing, he arrived for the usual short trip. This time, however, his hosts seemed more friendly and attentive than usual. At a certain point, talk of the match was brought up.

“‘I’m a Jew, and I cannot forsake my people to marry a gentile woman,’ explained Moshe.

“But the wealthy couple would not relent. Their entire estate would be his, they promised, if only he would marry their daughter.

“‘I am very sorry,’ said Moshe, ‘but there is simply nothing to discuss.’

“The landowner was used to getting his way and being turned down drove him off the edge. He imprisoned Moshe with the strong suggestion to think hard about the offer. But Moshe was infuriatingly adamant.

“Meanwhile, Moshe’s repeated refusals shamed the nobleman’s daughter as well. She withdrew to her room and didn’t venture out to eat, health deteriorating dangerously. One dreadful morning, the couple discovered that their daughter had died.

“All the sorrow that erupted henceforth was aimed at Moshe. It was his fault their daughter had died, the grieving parents reasoned. With the help of some burly helpers, the nobleman beat Moshe to death and buried him together with his daughter.

“Meanwhile, the tailor began to wonder what had happened to his apprentice. The landowner claimed ignorance, saying that Moshe had finished his work, was promptly paid, and had long since left. Their sincerity was never questioned, and Moshe’s whereabouts were never discovered.

“I was a shepherd when this story occurred, and I often slept with the sheep, out in the meadow. One day, your holy grandfather Srulik, whom we all knew and revered, woke me up and requested that I accompany him. We went to the grave, and together we retrieved Moshe’s body, brought him over to the forest, and buried him there, installing the headstone you found. As a reward for my work, your grandfather promised me a long life.

“Your grandfather told me one more thing. If his grandson ever visited me,” said the old man nodding toward Reb Baruch, who was indeed the grandson of the Baal Shem Tov, “I should tell him the story of Moshe, the tailor’s apprentice. And now, after I’ve told you the story, my mission is complete and I know my time has come.”