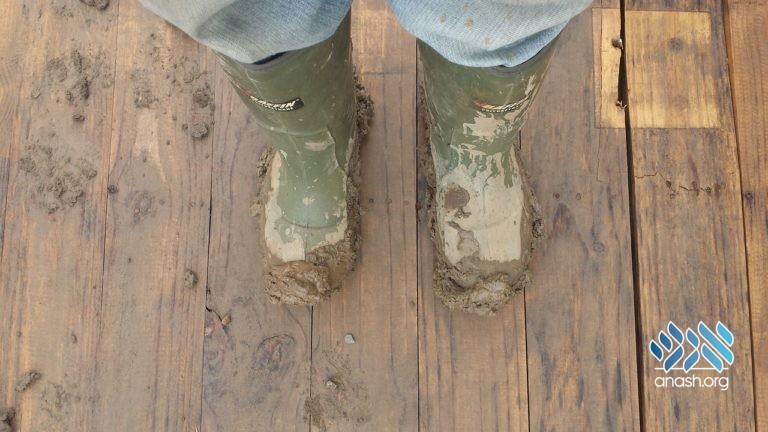 Melave malka story: The chossid was horrified by the thought of the mud from the streets on his floor and furniture. With a short story, his rebbe had him wish for lots of it.

A certain chassidic rebbe had a custom of visiting various Jewish communities, where he would stay in the homes of his wealthy chassidim.

In one of the cities that the rebbe would visit, there lived a wealthy chassid. Although he considered himself a follower of the rebbe and owned a large mansion with many rooms, whenever he heard of the rebbe’s arrival in his city, he made sure that his mansion was locked. Well aware of his rebbe’s tendency to stay at the homes of the wealthy, where there was ample room to welcome the masses who clamored to consult with him, the chassid would hurriedly leave his mansion, disguising his aversion to hosting as a last-minute business trip. He preferred that his house be left alone.

The suddenness of the rebbe’s appearance in his city caught the chassid, along with his wide-open mansion, off guard. Left with no choice, he reluctantly surrendered his house so that it could serve as the rebbe’s accommodation.

A few days later, the rebbe asked the chassid a very frank question: “Tell me the truth, are you not happy with the fact that I am here?”

“Nonsense, Rebbe. You are my most esteemed guest,” replied the chassid earnestly. “I am thrilled to be hosting you and delighted that you chose to stay at my house. The problem I have does not lie with you but rather with the chassidim. You see, when you come, they come. And when they come, along comes the muck from the streets. The very thought of all that grime on my clean floors and furniture just horrifies me. It was never because of you, G‑d forbid. But the idea of the mud has always been off-putting to me.”

Instead of addressing the man’s complaint directly, the rebbe responded with a story:

“There once lived a pharmacist who, as an avid sinner, managed to transgress almost all of the Torah’s prohibitions. After a long life of pleasure, the pharmacist was greeted in heaven by the horde of prosecuting angels that he managed to create throughout his lifetime of sins. Their loud, emphatic accusations and protests challenged the heavens to find a sliver of virtue for his poor soul.

“Suddenly, an angel appeared before the heavenly court and began to tell an account of kindness that transpired in the pharmacist’s youth: It once happened that a man’s wagon, overloaded with merchandise, keeled over in the road. The horse was pinned to the ground and the wagon driver, unable to raise the upended wagon by himself, stood by helplessly as he waited for aid that did not seem to come. However, continued the angel, the young pharmacist happened to be traveling down the same road. And when the wagon driver’s misfortune met his eyes, the pharmacist stopped to assist the grateful man. Only after the two successfully managed to turn the overloaded cart so that it was upright on its wheels, did the pharmacist continue on his journey.

“Immediately after the angel concluded his story, a horse and wagon overloaded with merchandise were placed on the empty pan dangling from the supernal scale, which had been tilted heavily on the side of sins. Helped by the new weight, the balance shifted towards the center. But the lifetime of sins still outweighed the single good deed.

“‘We demand that the mud and soil be added to the scale as well,’ chorused the good angels. ‘After all, he had to extract the wagon from the muck, didn’t he?’ But the prosecuting angels vehemently insisted that the pharmacist had nothing to do with the mud, which had no direct relevance to him. The heavenly court therefore decided to send the pharmacist’s soul back to this world to determine whether mud holds any significance for his soul. If so, mud would be placed on the heavenly scale on the side of merits. But if not …”

The rebbe paused his story and fixed his gaze on the chassid.

“You possess the soul of that pharmacist, and your evil inclination is working overtime not to allow that mud into your house.”

Upon hearing these words from his rebbe, the chassid ran to the door and began pleading to the chassidim waiting outside. “Come in, come in,” he cried. “Come as you are and greet our honored guest.”