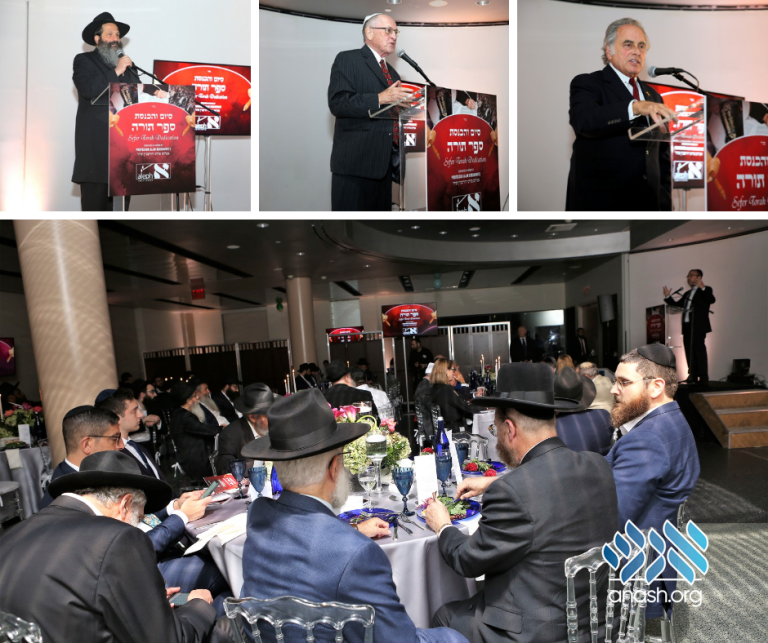 On Thursday, Yud Sivan, hundreds of men, women, and children filled the streets of Crown Heights to welcome a new Torah home. Each step that they took to accompany the Sefer Torah was also a show of support for Professor Alan Dershowitz, a man who is dedicated to the pursuit of justice.

Embroidered onto the mantle of the Torah is a posuk from Alan’s bar mitzvah parshah, “Tzedek tzedek tirdof”—which Alan often explains is not just a directive to pursue justice, but a command to chase after it with every resource G-d gave you. It’s the mantra by which Alan leads his days, working as an ambassador of hope and justice for so many. “I would never, ever turn down an opportunity to help a Jew in trouble,” Professor Dershowitz said.

Alan has literally saved lives of young parents, reunited families on the brink of collapse, all selflessly and pro-bono. It was Alan who, against the backdrop of the remarkable effort, persuaded President Trump to grant Sholom Mordechai Rubashkin a clemency, ultimately reuniting a family and reigniting people’s faith. The Aleph Institute and the Rubashkin family, through the generosity of an anonymous donor, arranged the timeless gift of a Sefer Torah as tribute to the priceless freedom, release, and happiness that Alan has given many members of Klal Yisroel over the years.

The Siyum, organized by Swiss Event Productions at the Jewish Children’s Museum, was well attended by the Crown Heights community and some of the families directly impacted by Alan’s dedication. Among those who helped complete the handwritten letters in the Sefer Torah were Alan’s childhood friends of 75 years, attorney Ben Brafman, Chazan Yitchok Meir Helfgot, Rabbi Menachem Genack of the Orthodox Union, and members of both the Klal Yisroel and Pidyum Shevuyin vaad.

“I’ve had many honors in my life,” Alan said at the Siyum, “but this is the most touching and significant.”