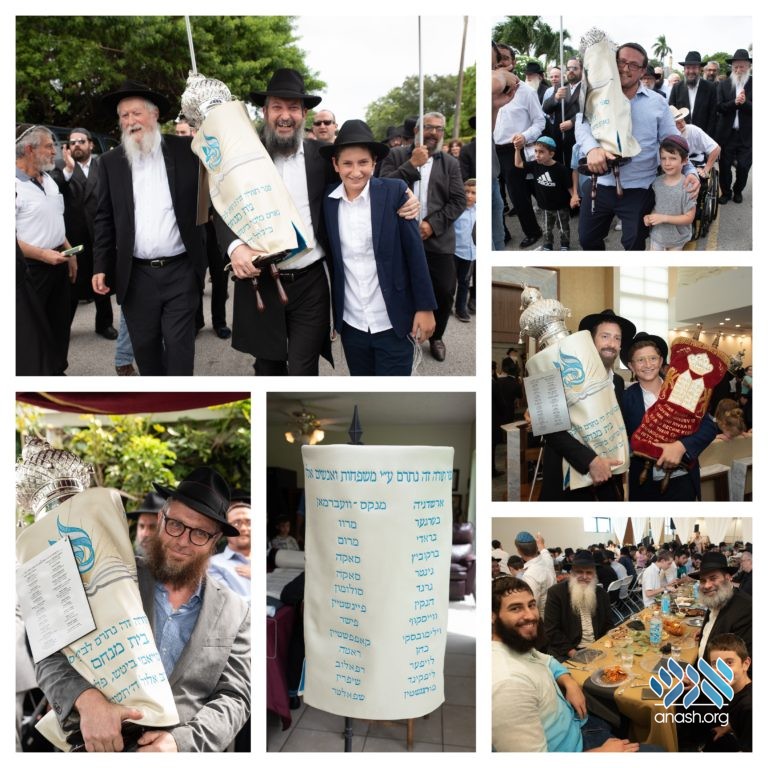 Almost a year ago on Simchas Torah, a group of men sat around a table in Bais Menachem of North Miami Beach, FL. It was 3:00 AM, and hakafos had long ended, but these men kept the flame alive during what turned out to be a most effective farbrengen.

“After the farbrengen, 26 families took a challenge upon themselves- that by next Rosh Hashana, we should be dancing with another Sefer Torah,” said Rabbi Eli Laufer, who serves as a Rabbi in the shul under his father-in-law, Rabbi Yosef Marlow.

On Sunday, this promise was fulfilled when a crowd of close to 500 gathered together to dance with the newly completed Torah. The siyum took place in the home of Yankel and Esther Wilyamowsky, who had participated in the commissioning of the Torah.

Once all the letters had been filled, a procession headed toward Bais Menachem, accompanied by live music and dancing. Following Ata Hareisa and hakafos, the entire community sat down to a seuda. During a program made especially for them, the children were treated to a special presentation led by local sofrim.

Rabbi Marlow, who serves as the community’s rav, spoke about the importance of continuing the siyum by taking on another shiur in Torah. He added that with the new year approaching, it is a good time to be reminded of how important it is to challenge ourselves in this area.

“With the growing community, another Sefer Torah was very needed to help accommodate all the minyanim,” Rabbi Laufer said. “It’s a beautiful way to enter the new year!”