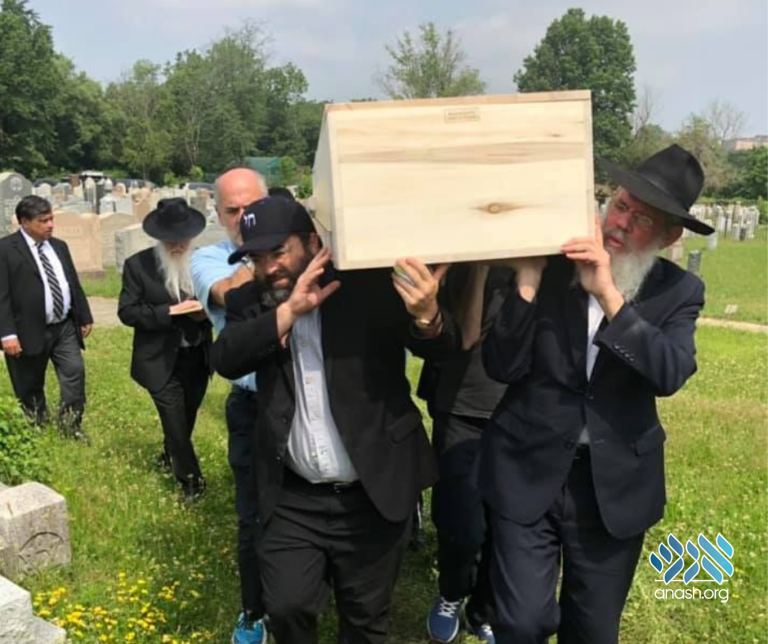 Yesterday I attended the funeral of a woman whose whole mission on earth may have been to share with others how you are supposed to die.

Some background is important. Yesterday I joined a group of men, mostly Chabad Rabbis, or their recruits, in an effort to pull together a minyan for a woman who otherwise was known to virtually no one.

Her name was Nancy Shapiro. Unfortunately that is about as much as we know about her. We don’t even know her Jewish name.

Approximately 7 1/2 months ago, Nancy’s pure and holy soul departed this earth at a hospital somewhere in Metro West, near Boston. Having no named next of kin, the hospital held onto the body for an indefinite period of time.

At some point, when no one claimed the body, the hospital reached out to a funeral home in Worcester to respectfully dispose of the body; i.e. cremation. A big no-no in Judaism.

For whatever reason, perhaps it is the law, the funeral home put out a notice in the Framingham local newspaper, that one Nancy Shapiro was going to be cremated.

Rabbi Lazarus, the Chabad Rabbi In Framingham, was notified about this notice from a community member, concerned that with a name like Shapiro it seems pretty likely that she was Jewish and perhaps he should step in to help avoid this cremation.

First thing Rabbi Lazarus did was contact the funeral home to see if it was too late. Thank Gd it was not. He then asked them to put everything on hold for a brief period of time.

He then reached out to the Chevreh Kaddisha – Jewish Burial Society of Boston, to see what can be done.

Some background work was done to ascertain that indeed Nancy Shapiro was Jewish, and to see if anything more about her life could be found out.

As it turns out, poor Nancy was in an abusive relationship until it ended, and she was the mother of a beautiful daughter. Unfortunately, her daughter, a victim of life, circumstances and abuse, is no longer mentally stable and was now institutionalized.

Nancy, having lived a life of pain and suffering, finally found herself destitute and alone on this earth. After some time, she got ill and passed away from her illness.

With no friends (or relatives capable of) taking charge, her poor body was left to lie alone, marking a devastating ending to an already tragic life.

Through a series of Divine providences, and with the herculean efforts of Rabbi Lazarus, the Boston Chevreh Kadishah, and this very decent funeral home in Worcester, Nancy Schapiro was able to finally be laid to rest with a Kosher and proper burial.

Her soul and body which have been in limbo for 7 1/2 months – as tradition teaches us, the soul cannot rest until it is interred – was finally put to rest.

I don’t know Nancy Shapiro, it seems like not many people did know her, and the few who did hurt her and then abandoned her.

What a waste. What a tragedy. What purpose did this woman and her suffering on this earth bring?

I am not G-d and I am not a prophet so I cannot tell you anything with any level of certainty.

Perhaps, her tragic story was to bring a bunch of rabbis and laypersons together, to unite in this holy mitzvah of escorting the dead to their final resting place.

Perhaps, even more importantly, it was so that the story is told. To communicate to the world about the growing crisis of Jewish people accepting cremation as an acceptable form of burial. Here you had a consortium of people, good people, who do not know one another, who joined hands to right this wrong.

They were united in the common goal, to make sure that a Yiddishe neshama, A Jewish soul, should have a proper kosher Jewish burial.

It is said, that the kindness done to someone who has passed on is called ‏חסד של אמת, true kindness. It is called thus because there can be no expectations of recompense.

I don’t know if that could be any truer today.

While one of the assembled pledged to say Kaddish in her memory, and another to put a plaque on their Shul wall to make sure that Kaddish will be said on her yahrtzeit for all future years, perhaps in fact she is paying something forward to those assembled.

She may have done more to inspired in her death, she did in her life.

She left a legacy of letting the world know that this is how a Jew ought to be buried. And this is how a Jew must react – as Rabbi Lazarus did – when you see a fellow Jew in distress. Even if that distressed person is no longer alive.