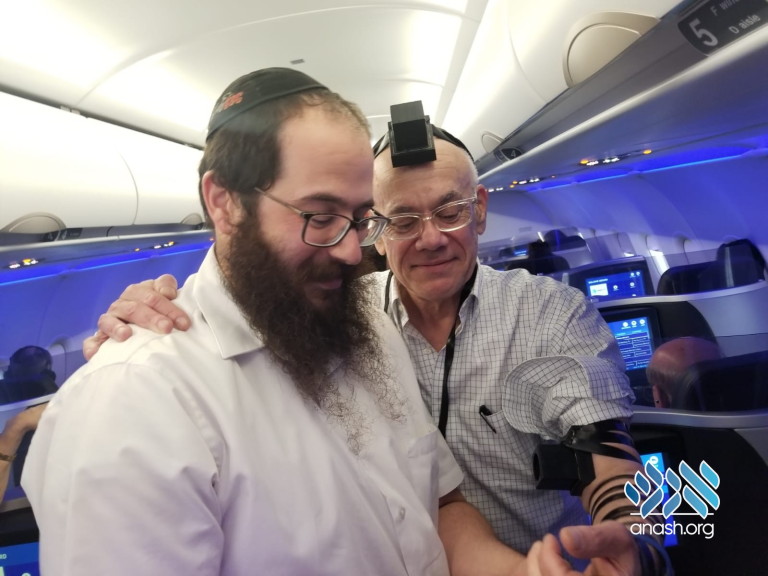 Dr. Hakimi putting on Teffillin with the fellow doctor that worked with him to save a passengers life.

“You just never know what a day will bring. Just now I witnessed incredible Divine Providence.

Sitting on the JetBlue Airways plane back to LA waiting for takeoff, I was surprised to see my friends the Hakimis walk on. We had celebrated their son’s Bar Mitzva this morning. They “just happened” to be on this same flight. They were delayed on their way to the airport and almost missed the flight, but they just made it on as the doors were closing.

Michael (Michoel) “just happens” to be an incredibly talented cardiologist. And he “just happened” to be sitting one row in front of a woman who had a seizure somewhere over Nebraska. Dr. Hakimi – together with some other doctors and nurses on board – was able to save the woman’s life, and she’s been safely taken off the plane in an emergency landing in Denver.

So I didn’t expect to visit Denver today. And I may be a couple of hours late getting to LA. But I did get to see my friend be the hero he is every day. And I got an always important reminder that Hashem puts each of us where we need to be when we need to be there.

Michael’s immediate reaction here on the ground in Denver is to go put on Tefillin with the other doctor who worked together with him to save a life!