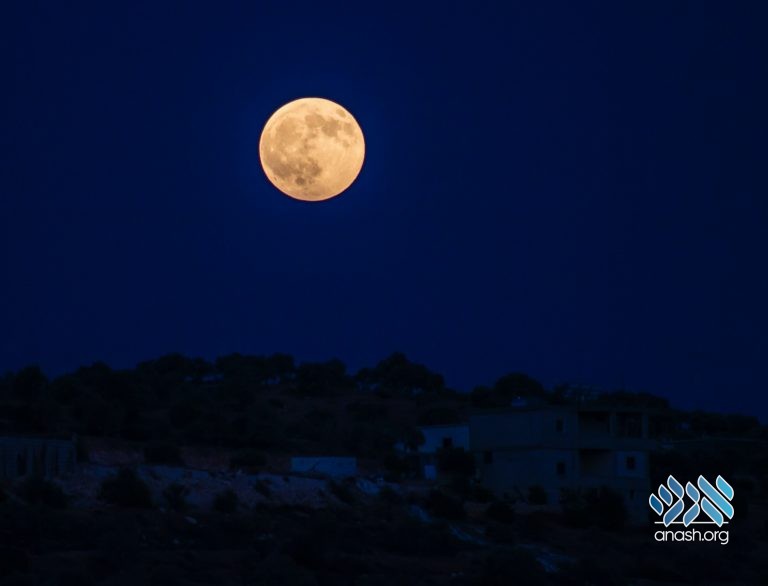 Motzei Shabbos Story: Every night, Rabbi Tzvi Elimelech of Dinov, Poland, conducted Tikkun Chatzot as the clock struck midnight. But late one evening, while talking with his chassidim, he began telling them a story instead.

Every night, Rabbi Tzvi Elimelech of Dinov, Poland, conducted Tikkun Chatzot (the midnight liturgy lamenting the destruction of the Holy Temple) in a small synagogue near his home. That late at night, most of the synagogue’s candles had already burned out and no one else was ever there. Hunched over in the gloom, he would sit on a low stool in his usual corner, reading the prayers with tears that stopped only at dawn.

Rabbi Tzvi Elimelech occasionally remarked, “When Israel is persecuted to the ends of the earth and the Shechinah (Divine presence) lays trampled in the dust, how can one muster the audacity to curl up beneath the covers and sleep soundly?”

Not once did he miss a night. His custom was no secret; anyone could walk over to the small synagogue and peek through the windows to see him mourn the destruction of the Holy Temple. Only a few of his Chassidim allowed themselves to do so, however.

One evening, Rabbi Tzvi Elimelech sat with his close Chassidim sharing teachings of Torah. It was nearing midnight, which meant Rabbi Tzvi Elimelech would soon excuse himself from the room. But much to the Chassidim’s confusion, that’s not what followed. Their Rebbe appeared to be so engrossed, he simply continued speaking, even as the clock ticked closer to midnight.

Knowing how conscientious their Rebbe was regarding Tikkun Chatzot, the Chassidim began to eye each other. Perhaps in the course of his words he had failed to observe the time? No one dared, however, to speak up or even hint to Rabbi Tzvi Elimelech. Surely, the chiming of the clock would call his attention to the hour.

The hands struck 12. Rabbi Tzvi Elimelech, the focus of every eye in the room, ignored the chimes in the background and continued to sit.

“There once lived a wealthy man,” he began, causing the Chassidim to lean forward in anticipation, “who oversaw many rewarding business deals and owned multiple estates and vineyards.”

Rabbi Tzvi Elimelech took his time painting a picture of the man’s life and fortune in vivid colors. The Chassidim sat spellbound, the passing of minutes momentarily erased from their minds.

“The day came when the man stumbled upon hardship and his affairs quickly sunk. Inundated by debt, he was forced to sell everything and, eventually, declare bankruptcy. As his life slid into further ruin, he struggled to find bread to eat. He tried his hand at menial work, but his unfamiliarity with it meant he couldn’t hold a job for long. Unable to earn a single coin, he scrounged his livelihood from knocking on doors with his palm outstretched.

“At first, the sight of the wealthy man walking around in rags melted the townspeople’s hearts. Hoping to restore some of his dignity, they responded when they could with a donation, a meal, or an encouraging word. Eventually, memory of his past was lost to time, and he became estranged from his family, taking up the wandering staff of an ordinary beggar. The man, an empty and miserable shell, turned to roam the country.

“Whichever town he chanced upon, the whereabouts of the local synagogue was usually his first question. It was there he spent his days, stretched out on a bench, eating his few slices of bread, and begging for his next meal.

“But Friday night was something he always looked forward to. Eyes downcast, he would linger by the exit, hoping to be invited to join a family at their Shabbat meal. When he was, he would enjoy his only hot food of the week.

“One Friday night, the synagogue teemed with an influx of guests. After the prayers were over, the man watched as one by one, the guests followed their hosts out for the night, and the synagogue grew emptier and quieter. When the last voices finally faded, he was left alone in silence. Uninvited and forgotten, he had nowhere to go.

“The man sighed, painful sadness searing his heart. The rejection had hurt him deeply. He pulled out a ratty handkerchief filled with the last crumbs of dry bread, washed his hands, and proceeded to say Kiddush over the morsels. Within a minute, his Shabbat meal was finished. Not feeling tired, he glanced around the empty synagogue, looking for something to occupy himself with. The signs decorating the walls seemed interesting enough, and the man strolled around studying them.

A prayer for the reading of the Torah. Modim Derabbanan. Someone’s memorial. The man would peer at each one for a moment before moving on to the next. As he turned away, something made him stop and look at one last notice.

“Master of the Universe…

“Only the first four words, barely legible, remained. The rest had long faded away. The words twinged his heart, and he pursed his lips into a bitter smile.

“Master of the Universe, the man thought, I see your circumstances fare no better than mine…”

Rabbi Tzvi Elimelech finished his story and burst into tears. The Chassidim watched, eyes moist, as it dawned on them: their rebbe never forgot nor missed Tikkun Chatzot, and this evening was no different. Instead of mourning alone, he had chosen to include them, poignantly using the analogy of the pauper to emphasize just how bitter G‑d’s exile is.