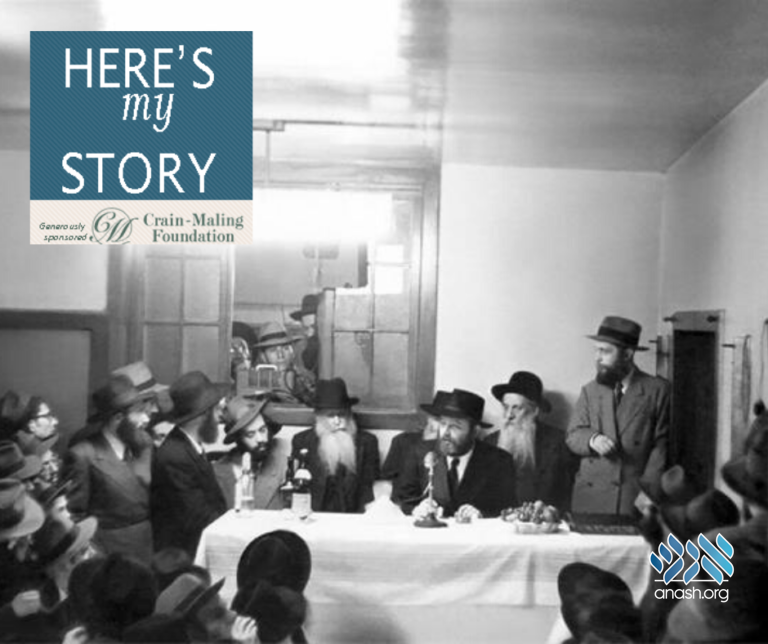 Here’s My Story: Rabbi Sholom Nemtzov relates a story about his grandfather Rabbi Avraham Sender Nemtzov and two critical requests he made.

My story begins with my grandfather – Rabbi Avraham Sender Nemtzov – in Russia.

In 1897, after spending six years as a conscript in the Czar’s army – during which he managed to keep Torah and eat only kosher – he arrived in the town of Lubavitch, where the Rebbe Rashab, the fifth Lubavitcher Rebbe, was in the process of opening his new yeshivah, Tomchei Temimim.

At first, my grandfather was rejected by the yeshivah’s administrator, Rabbi Yosef Yitzchak, the son of the Rebbe Rashab. The reason was that my grandfather was by then a married man of twenty-seven, whereas most of the other students were teenagers.

But my grandfather insisted on making his case to the Rebbe Rashab himself. He argued that he could have gone to another, more-established and better-known yeshivah where he would have received a stipend. Instead, he was coming to a brand new yeshivah, with no reputation, and he was doing so because he had come from chasidic roots and wanted his descendants to be chasidim. He told the Rebbe Rashab: “Don’t let me in just for myself, but for my grandchildren and great-grandchildren, and all the generations to come.” And because of that, he was allowed in.

The Rebbe Rashab’s decision had a direct effect on all our lives – on my father, on myself, and on my children. We are all Lubavitchers and committed to spreading chasidic teachings wherever we find ourselves.

My grandfather spent several years studying at Tomchei Temimim, where he became friendly with the administrator who had initially rejected him, the Rebbe Rashab’s son, who would later succeed his father as the sixth Rebbe and become known as the Rebbe Rayatz.

Even after my grandfather left the yeshivah to become a kosher butcher (shochet) and immigrated to Manchester, England, he maintained regular contact with the Rebbe Rayatz via correspondence. They saw each other only once – in 1937, when the Rebbe Rayatz visited Paris and my grandfather went there to meet him. At that meeting, the Rebbe Rayatz famously told him, “Du hust gezucht der emes, du hust gefunen der emes un du lebst mit der emes – You searched for truth, you found truth and you live with truth.”

My grandfather remained in England, earning a living as a shochet for forty years, until he retired in 1945. When the Rebbe Rayatz passed away in January of 1950, my grandfather sent a telegram to the chasidim in New York, famously concluding: “v’Hashem yisborach yinachameinu b’Menachem – May G-d console us with Menachem,” referring to the late Rebbe’s son-in-law, Rabbi Menachem Mendel Schneerson, also known at the time as the Ramash, who many of the chasidim favored to be the next Rebbe.

My grandfather was among the first who discerned that the Ramash should be the next Rebbe and his influence proved significant. On the first anniversary of the Rebbe Rayatz’s passing – after a year had gone by without the Rebbe formally accepting the position – my grandfather came to New York and played a decisive role.

In commemoration of that occasion, a farbrengen was held and people came from far and near to witness the historic event, in anticipation of how it would turn out. The crowd – some 800 men strong – filled the synagogue wall to wall, anxiously awaiting what would happen next.

At the outset, the Ramash delivered several Torah talks (sichot) during which he spoke about the Previous Rebbe and encouraged all the chasidim to continue the work he had begun. After about an hour had passed, my grandfather – who was in his 80s by then – stood up and said, “Everyone wants to hear a chasidic discourse (maamar). Torah talks are good, but now we need to hear chasidic teachings.”

To my grandfather’s mind and to the minds of the chasidim who were gathered there, a chasidic discourse – which is generally delivered only by a Rebbe – would indicate that the mantle of leadership was being accepted.

Everyone understood this, and when my grandfather made his declaration, the entire synagogue fell silent. They all waited with bated breath.

And then the Ramash famously began: “In the discourse that the Rebbe [Rayatz] issued for the day of his passing, he begins with Basi l’gani – I have come into my garden…” He began with the Previous Rebbe’s teachings on this verse from the Song of Songs, and then went on with his own discourse from there.

After a while, the Rebbe took a break in the discourse, so with great excitement my grandfather got up and announced to all those gathered, “G-d has helped us! We have a Rebbe! Let us all say l’chaim to the new Rebbe!”

The joy of the chasidim was indescribable.

That is the story of the momentous event that has gone down in the history of Chabad. It was because of the entreaties of chasidim like my grandfather that the Rebbe accepted the leadership at a time when he was reluctant to assume the position.

And this is how my story comes full circle. Had the Rebbe Rashab not allowed my grandfather into the Tomchei Temimim yeshivah, he would never have arrived to that time and place where he stood up on behalf of the chasidim and implored the Rebbe to lead them. I would venture to say that the Rebbe Rashab had great foresight – he knew exactly what he was doing.

Rabbi Sholom Nemtzov resides in Five Towns, New York, where he manages Aniyay Ircho, a charity organization. He was interviewed in April of 2012.