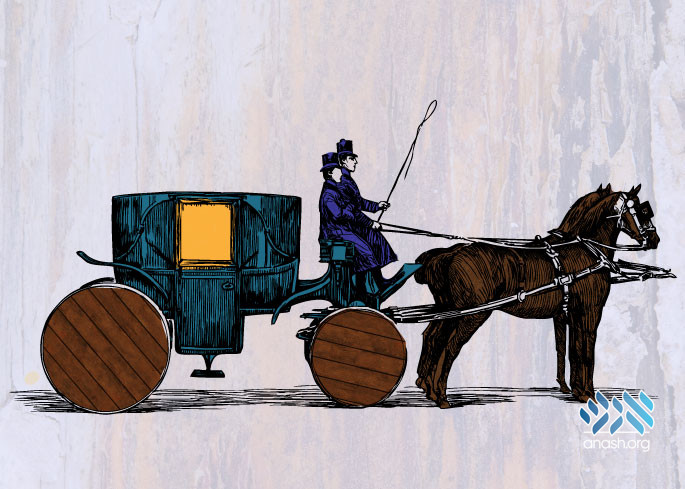 Hearing that Reb Feivish of Zabriza was going to spend Shabbos in Skole, his young talmid Reb Menachem Mendel of Kosov set out to greet him—on foot, because he could afford no other way. As evening fell on Thursday, a village inn came into sight. He had not tasted a morsel of food all day, and he was weary from trudging across Ukraine, so he asked the innkeeper if he could spend the night.

“You may certainly sleep here,” the innkeeper agreed, “but I have nothing to give you for supper. I don’t even have a slice of bread left for my little ones. There is no income from this inn, and if I do not pay my rent within a few days, the poretz of this village will throw me and all my family into his dungeon. I have not a solitary coin to start paying with.”

Rabbi Menachem Mendel was so distressed to hear this story that he lay awake all night. In the morning he said farewell, gave the poor man a bracha that Hashem should help him, and resumed his slow tramp along the highway.

A carriage soon overtook him, and the Yid sitting within called out to him: “Young man! Where are you heading?”

“To the Rebbe of Zabriza.”

“In that case,” said the owner of the carriage, “come and join me up here, because I am headed in that direction.”

“I will not travel with you,” stipulated Rabbi Menachem Mendel, “unless you give me twenty silver coins.”

“Is it not sufficient that I offer to take you in my carriage without charging any fee?” fumed the other. “On top of that you demand payment?!”

Then he added: “I shall give you a respectable contribution – but not such a large sum as that!”

“Believe me,” said Rabbi Menachem Mendel, “I do not need the money for myself. My request is made for the benefit of others – and for your benefit, too.”

The rich man in the carriage now wanted to know what benefit he could expect to derive from his contribution, apart from having earned a mitzvah. “Who knows what ups and downs each new day can bring?” replied Rabbi Menachem Mendel. “For life is a wheel that turns in the world…”

His words had the desired effect. The rich man took out twenty silver coins and handed them to his prospective passenger, who said: “Now I shall not move from here until you return with me to the nearest inn, so that you will be able to see with your own eyes what a great mitzvah you have fulfilled.”

The rich man agreed, and they rode back together along the highway until they reached the village. Rabbi Menachem Mendel handed the innkeeper the money he had just been given, sent him off to town to buy up a stock of vodka for his inn, and assured him that from that day on he would prosper in all his affairs.

He now turned to the owner of the carriage and said, “As you know from the words of our chachamim, ‘Mitzvah goreres mitzvah- one mitzvah leads to another.’ Let us stay here for shacharis, and in the meantime, if you give your coachman some money, he will be able to go and buy bread for breakfast so that our host’s children will have something to eat.”

There was enough bread left over for Shabbos meals for the whole family, as well as for provisions to last the travelers for the remainder of their journey. As they were about to leave, Rabbi Menachem Mendel whispered in the ear of the innkeeper, “From now on you will prosper more and more, and in the course of time my rich companion will utterly lose his fortune. When the time comes, remember to repay one kindness with another!”

When they arrived at Zabriza they were unable to make their way through the bustling throngs of Chassidim, until Rabbi Feivish himself called out, “Make way for the people who have just performed a mitzvah!”

In response to Rabbi Menachem Mendel’s account of how his traveling companion had saved an entire family from starvation, the tzadik – borrowing the words of Yaakov Avinu- said, “I know, my son, I know. But did you tell the innkeeper how he is to act when the time comes?”

“I told him,” said Rabbi Menachem Mendel, “and he undertook to fulfill his obligation.”

After Shabbos, the rich man drove off in his carriage a contented man. In due course, however, he was tossed by the tempests of time and fortune. Every transaction was a disappointment, every investment a failure. He was left literally penniless. Dire necessity drove him to wander from town to town, knocking on the doors of the well-to-do in quest of tzedaka.

During the same period, Rabbi Menachem Mendel became renowned as the Rebbe of Kosov and the innkeeper became a prosperous man, just as his young guest had promised him long ago.

In the course of his years on the road, the destitute wanderer arrived at Kosov. He did not know that the tzadik who had made the name of the town famous was the same young man to whom—in such different circumstances—he had once given twenty silver coins.

The itinerant paupers who knew Kosov from previous visits now told the newcomer, “Let us come along and visit the local Rebbe. There is a man who knows how to provide for the likes of us!”

Recognizing him at once, the Rebbe called him aside and said, “Take my advice, my friend, and may Hashem prosper your path. I will give you a letter to a certain individual, and through him you will be helped.”

The pauper wondered at these words but was too weary to ask for an explanation. With the letter in hand he set out in the direction he was told to take, and eventually found himself treading the length of the long forgotten dirt track that meandered its way to a certain remote village inn.

The innkeeper did not recognize him after fifteen years, but before he opened the envelope he said, “I know this letter is from the Rebbe of Kosov, for this very night he appeared to me in my dream and told me that the time had come for me to repay one kindness with another.”

He then reminded the wanderer of their first encounter, and told him what it was that their mutual friend had whispered in his ear at the time. For the first time in years, a smile warmed the strained features of the dusty traveler.

The innkeeper continued, “Be my guest until I make an honest reckoning of all the prosperity with which Hashem has bentched me. Then we will travel together to Kosov, and we will do whatever the Rebbe tells us.”

It is not known exactly what instructions were given by the tzadik for the settling of their accounts, but one thing is certain: the innkeeper made the wanderer an exceedingly generous gift, the tzadik blessed him with success, and when he re-established himself in business he prospered in every venture.