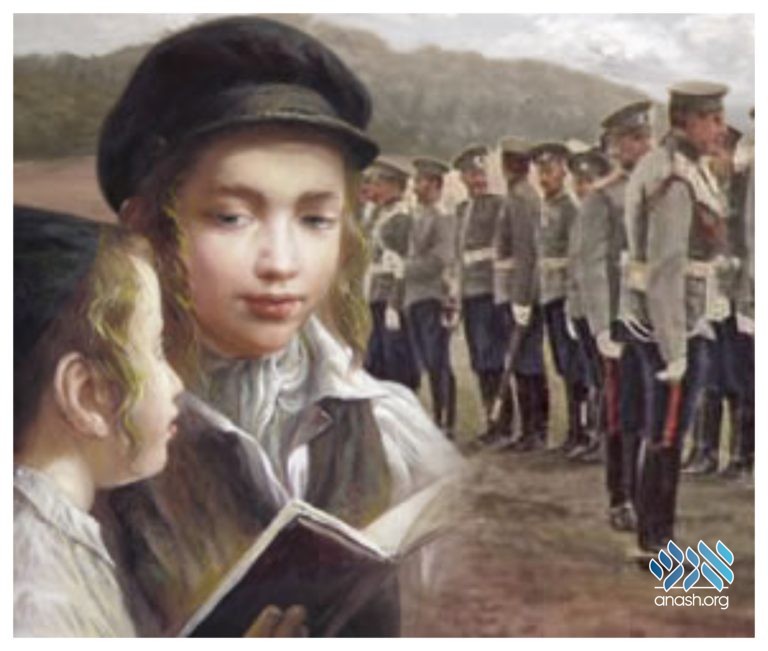 Melava Malka story: A bewildering instruction from the Rebbe Rashab led a poor widow to her long lost family.

Aiming to assimilate the next generation of Yidden, Czar Nicholas issued a decree mandating the conscription of Jewish boys into his army for 25 years of service. He pressured town councils to fill an enforced quota, and community leaders scrambled to find who to send. Kidnappings became the frightening norm, usually occurring when boys were on the way back from cheder, and the children were often never seen again. Parents lived in perpetual dread.

In the barracks, the boys, often as young as 8 years old, were subject to treatment intended to coax them to abandon Yiddishkeit. Those who refused baptism endured beatings, torture, and starvation.

Eliyahu, a timid boy raised in a chassidishe family, had been snatched from his shtetl’s street by a man on a horse. Joining a group of other conscripted boys, Eliyahu defied the odds over the many years, tightly gripping the sliver of Jewish identity he managed to preserve. By the time he was discharged, he was a grown man alienated from his family, whose whereabouts remained unknown.

He settled in St. Petersburg and started a business, which quickly took root and flourished. Another happy development soon followed when Eliyahu met his wife, who was Jewish, and the two lived a quiet life, observing Torah and mitzvos to the best of their abilities.

Several hundred miles to the south lay the small but animated town of Lubavitch, where the Rebbe Rashab lived. Yidden from far and wide traveled long distances to meet with him, request his brocha, and ask him to intercede in Shamayim on their behalf.

One day, a widow, mother to three daughters, approached the Rebbe, seeking his guidance as per her friends’ advice. Sobbing miserably, she described her dilemma. Money didn’t come by easily in her home. Baruch Hashem, she was blessed with fine daughters, but she had no idea how she would pay for the weddings she hoped to celebrate.

The widow left the Rebbe’s room completely bewildered. Overwhelmed by helplessness, she started to cry again. The chassidim milling around offered their help.

“The Rebbe told me to go to St. Petersburg,” sniveled the widow. “I have no idea what he means and he hasn’t told me where. I don’t know anyone in St. Petersburg. Even the fare I’m unable to afford.”

The chassidim calmed her down, explaining that the Rebbe’s advice was never for naught. Someone volunteered to go around collecting, and a little while later they presented the widow with a fair sum of money. Hope reignited, the widow ventured off, still puzzled by the Rebbe’s instructions.

Stepping off the train in St. Petersburg, she wondered where to start. St. Petersburg is by no means a small city, and with no directions to follow, the widow began tracing its streets aimlessly. For hours on end, she kept her feet moving, hunger and exhaustion slowly inhibiting her search. Despair finally overtook her right outside an imposing residence. Anxious to take the weight off her feet, she sat on its steps, lay back, and closed her eyes. Sleep fell over her effortlessly.

She was awoken by yelling. A servant of the residence had found her asleep on the steps and assumed her to be a common beggar woman. Face burning, the widow gathered herself and prepared to leave.

At that moment, the front door swung open, revealing a man who looked on curiously. He asked the servant the reason for the noise. As the servant stuttered an explanation, the man realized the woman was Jewish and ordered the servant to have her admitted.

Once inside, the widow was ushered to the dining room where the man and his family were having dinner. Someone sat her down and a plate of hot food and a steaming drink appeared in front of her. Noticing her hesitation, the man explained that he descended from a long lineage of chassidim; everything in his house was kosher.

The warm atmosphere and her host’s kindness made the widow feel at ease. At his request, she divulged a bit about herself and about her deceased husband, mentioning his name. From the head of the table, the host made a strange sound. Blood drained from his face, and it was obvious he struggled to say something. Several moments later, the man asked the widow to repeat her husband’s name.

Suddenly, the man was very interested in her relatives, and he could speak of nothing else. The widow was questioned, almost interrogated, on her various family members, while the man became more and more agitated.

“So your husband is my younger brother!” he finally cried.

The man, who introduced himself as Eliyahu, now told the widow about his brother and their idyllic childhood. Unfortunately, while still very young, Eliyahu was kidnapped to serve in the Czar’s army. Then, all connection with his younger brother abruptly ceased.

When Eliyahu heard the widow’s financial plight and her inability to marry off her daughters, he promised to help.

The woman gained the financial security she and her daughters needed. But more importantly, they all savored the joy of reconnecting after so many years of separation.