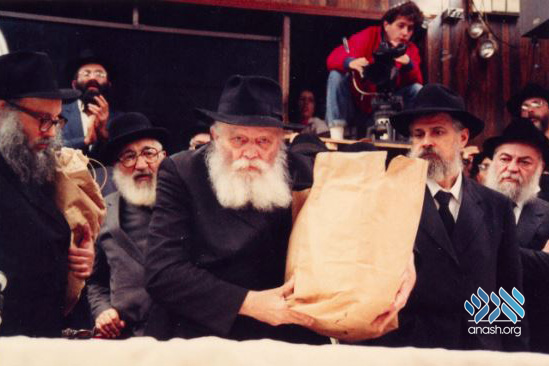 What is Keren Levi Yitzchak?

In the authoritative book on minhagei Chabad, Sefer Haminhagim (p.100), it states: “The Rebbe founded Keren Levi Yitzchak on Chof Menachem-Av 5724 (1964), on the occasion of the 20th yahrzeit of the Rebbe’s father, Rabbi Levi Yitzchak Schneerson. The purpose of the fund is to provide assistance, primarily loans, to educational institutions al taharas hakodesh and to teachers of limudei kodesh.”

In all the years subsequent to the founding of the fund, at every Chof Av farbrengen, the Rebbe spoke about the merit of donating to the fund he established in his father’s honor.

equivalent to the name, it has been suggested that donations be given in amounts of 254 — the

Keren Levi Yitzchak is one of the many funds for which the Rebbe personally appealed for funds. They are known as “Magbis.”

These would take place during the farbrengens of Vov Tishrei, Simchas Torah, Yud-Tes Kislev, Yud Shevat, Purim, Yud-Beis Tammuz, Chof Av and others. The appeal made on Vov Tishrei (for Keren Chana benefitted Merkos L’Inyonei Chinuch).

The Rebbe would speak on the subject of the particular appeal, and encourage everyone to join, “with joy and gladness of heart.” The Rebbe would give his blessings to those who donate, and would ask that a joyous niggun be sung. The song usually sung was V’harikosi lachem bracha ad bli dai. The Rebbe would make mention of specially prepared pieces of paper and envelopes distributed at the Farbrengen for the purpose of writing the donor’s Hebrew name, and that of his mother, to be enclosed with the donation. The envelopes would be passed up to the Rebbe’s table where he would personally place them into a large bag. At the conclusion of the farbrengen, the Rebbe would personally carry out the large bag containing the envelopes with the donations. On the day following the farbrengen the funds were deposited into the Machne Israel (or Merkos) bank accounts.

Yes. Magbis has continued until today. While some appeals are made by mail and on the internet, www.magbis.org makes giving to the Rebbe’s various appeals possible anytime of year.