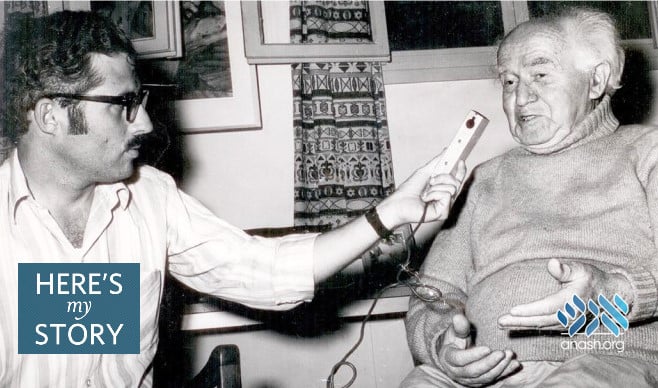 How did the Rebbe respond when Israeli reporter Shlomo Nakdimon asked for an on-the-record inverview? And which leading politician’s unfinished work did the Rebbe tell him complete?

Mr. Shlomo Nakdimon, a veteran Israeli political reporter, was close to Prime Minister Menachem Begin and served as his communications consultant. He was interviewed in Tel Aviv in August of 2009.

Early on in my career as a political reporter – first for Herut, the daily newspaper of the Israeli Herut party, and then for Yediot Achronot – I heard the Rebbe’s name many times. This was because the Chabad Movement was unique in its involvement in the lives of Israelis, in keeping with its slogan of Ufaratzta, which can loosely be translated as “spreading the faith.” It was Chabad’s mission to influence matters of Jewish life wherever Jews dwelled.

I would spend a lot of time in the hallways of the Knesset as a political reporter, and I met a number of Chabad chasidim who were promoting Jewish education and the Jewish identity of the state. Today there is almost no concern, social or business, that doesn’t have a lobby which works to promote it, but back then, these chasidim were pioneers. Because of their pleasant approach and personal warmth, everyone in the Knesset – even those who were cynical towards matters of religion – treated them with affection and their cause with sympathy.

In 1962, as part of my journalistic work, I was sent to the United States and decided that I wanted to meet the Rebbe. An audience was arranged, and we had an extremely fascinating conversation. At the outset, I told the Rebbe that I wished to interview him on the record, but he responded that he doesn’t give interviews to reporters. But after I explained that I would like to discuss matters of personal interest to me and, with his permission, would publicize his answers, the Rebbe agreed to continue the conversation.

I then brought up various questions that I prepared ahead of time. One of the things I asked was why the Rebbe wasn’t making aliyah to Israel, or at least coming to visit.

In response, the Rebbe did not rule out the matter in principle, but he explained that there are a few important matters which are preventing him from leaving his present location. Traveling to Israel shouldn’t be just for pleasure, he said, but to achieve something. “When the reasons that are obligating me to stay in the United States no longer apply, what I can accomplish there can be considered.”

I asked the Rebbe when he thinks this will happen, but his answer was only a smile.

My next question concerned current events. Shortly before, an American astronaut had successfully orbited the earth, and many were wondering if it was possible for man to land on the moon. I asked the Rebbe about this matter, and I also asked him if he sees man’s exploration of space as a contradiction of Torah and Jewish law.

The Rebbe expressed the opinion that man would indeed be able to land on the moon and he completely negated the contradiction some saw between scientific research and Torah. He declared that, on the contrary, the more science and technology develop, the clearer it becomes that everything Torah says is true. He also predicted that some basic scientific assumptions, which have been considered indisputable for years, would be undermined and would collapse.

Another topic which came up in our conversation was the Rebbe’s approach to religious political parties in Israel. While the Rebbe stressed that he didn’t want to get involved in Israeli politics, he also held that the existence of such parties was a necessity so that religious concerns were taken into account by the government.

As he was speaking, I felt that the Rebbe was trying to recruit me to assist him in strengthening the Jewish character of the country. He opined that the Israeli government is dealing too much with side issues and not enough with what truly matters. An honest review of the history of the Jewish people would reveal, he said, that keeping Torah has ensured the existence of the Nation of Israel throughout the generations, and that those Jews who have deviated from it have disappeared without a trace.

The entire conversation with the Rebbe was most fascinating, at the end of which he asked me to give his regards to the founder of the Herut party, Mr. Menachem Begin, whom he had first met two years earlier.

Fifteen years later, in 1977, a short time after he was elected as prime minister, Mr. Begin came to the United States to meet with President Jimmy Carter, and I was sent by Yediot Achronot to cover the visit. But the first item on Mr. Begin’s agenda was a meeting with the Rebbe. As a traditional Jew, Mr. Begin felt that it was important for him to receive the Rebbe’s blessing before he went on to Washington to meet with the president.

The Rebbe came out of the building – a very rare thing – in honor of Mr. Begin’s arrival and they entered arm in arm. The meeting between them, which lasted about two hours, was not recorded and what was said during this meeting was never publicized. But at the end, the Rebbe and Mr. Begin went out to the reporters who were waiting outside. His face beaming, Mr. Begin passionately declared that the Rebbe strengthened him for the meeting with President Carter, and he felt now that not only were the Israeli people standing behind him, but so were all the world’s Jews.

Not long after those events, Mr. Begin invited me to join his staff as a communications consultant, a position which I filled for two years. It was during this time that the meetings with Egyptian leaders at Camp David took place, and Mr. Begin faced heavy political pressure from the Americans and others to withdraw from the Sinai. There were tense confrontations with President Carter, and Mr. Begin appointed a special contact person whose job it was to report to the Rebbe everything that was going on. The Rebbe urged him to resist all pressure, but ultimately, Mr. Begin did not heed his advice, and the Camp David Accords were signed in 1979. (The Rebbe later stated that this agreement led to many of the problems that Israel subsequently faced.)

The third, and last, time that I saw the Rebbe was in 1990 when I came to talk to him as he was giving away dollars for charity. When I introduced myself as Shlomo Nakdimon, the Rebbe immediately reminded me that the Talmud speaks of a man named Nakdimon ben Gurion. “And so, whatever [Prime Minister] Ben Gurion should have accomplished, you will have to make sure to fulfill.”

He also noted that Nakdimon ben Gurion provided water to the residents of Yerushalayim during a drought. “Water symbolizes Torah,” the Rebbe said, urging me to include words of Torah in the articles that I published, and not just by way of a hint, but clearly and proudly.

After twenty-eight years, he was still trying to recruit me to assist him in strengthening the Jewish character of Israel.