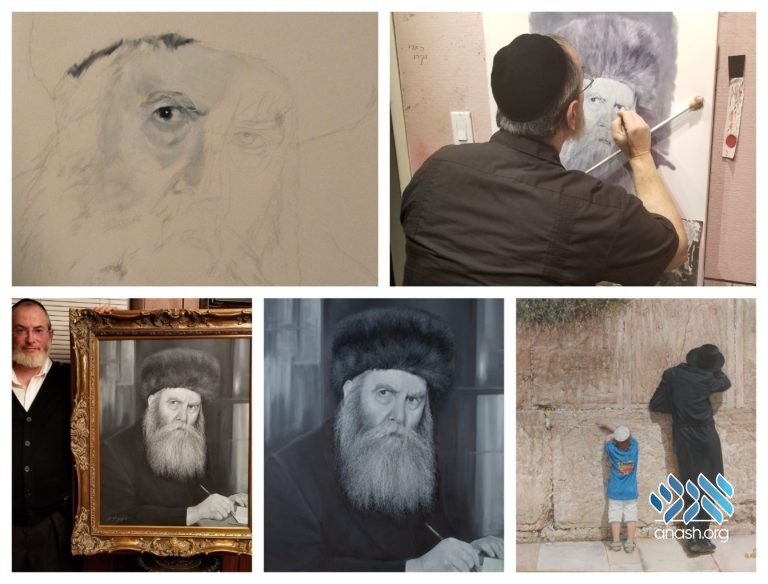 Shlomo Yosef Josefovits of Boro Park was at a very difficult point in his life. An artist in his early 60s, he had suffered a stroke seven months earlier, and it seemed he would never paint again.

The inspiration necessary to put the brush to canvas simply wasn’t there, and as any artist will tell you, one can not force himself to paint. Like a bird with clipped wings, an artist lacking the right mood and inspiration will find it impossible to take off. The stroke had also made it physically difficult for him to work.

While his arrival to the professional art scene came later in life, Shlomo Yosef had been painting as an amateur since he was a child. Following his marriage, he joined his family’s lithograph business. This line of work involved a form of art, albeit one that did not utilize the full scope of his talent.

With the introduction of computers, the lithograph industry eventually ceased to exist. When Shlomo began to witness the industry’s decline, he decided to fall back on his talent – real art. He went back to school to learn from an Italian master, and was soon in business.

Unfortunately, the stroke seemed to have stopped all progress. Until today, Shlomo compares the feeling in his arm to the sensation of having a limb “fall asleep” after resting on it for too long. One can move the limb, but it feels heavy and unnatural. Certainly, it does not allow for the optimal dexterity an artist would wish to have.

Now, sitting in the hospital seven months into his recovery, Shlomo decided to give painting a shot. He began looking for pictures of Chassidishe Rebbes in black and white; it would be easier in his condition to use only those two colors.

Later, his friend showed him the video of the Frierdiker Rebbe signing and accepting his US citizenship. (See below.) Shlomo was very taken by the whole scene. The Rebbe’s radiant face combined with the rich colors further inspired him in his work.

Fifteen months after his stroke, Shlomo still has a long way to go. He can’t paint for hours at a time as he used to; he gets tired and needs to rest. However, the inspiration and passion is back!

I asked Shlomo how long these portraits take, and was surprised to learn that at his peak, it would take three months of working several hours a day. These days, it takes longer, as he must stop more frequently to rest.

Just in time for Yud Beis-Yud Gimmel Tammuz, the painting of the Frierdiker Rebbe is available for sale. Shlomo can be reached via e-mail, or you can call him at (646) 522-3653.