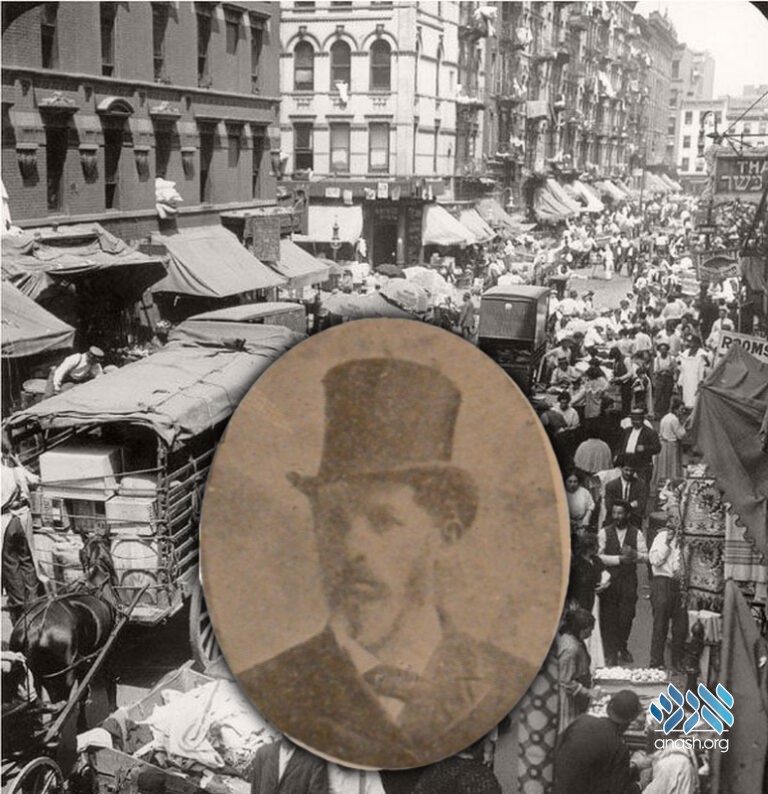 Harav Chaim Yakov Vidrevitz, chossid of the Tzemach Tzedek and Rebbe Maharash, arrived in the US in 5652/1892 and did much to improve Yiddishkeit in America. Marking his 110th yahrtzeit.

Harav Chaim Yakov Vidrevitz, a chossid of the Tzemach Tzedek and Rebbe Maharash, who was the Moscow rov and later came to America to serve as rov in New York, passed away on 12 Iyar, 5671/1911.

Harav Vidrevitz was born in Dobromisla, in the Mohilev gubernya (province), to his father Reb Binyomin, on 8 Kislev 5596. A young prodigy, he soon mastered all of shas and poskim and at a very young age. Although from a non-chassidishe background, upon the advice of a friend he traveled to Lubavitch to be one of the yoshvim by the Tzemach Tzedek (these were studious young men who came for extended periods of time to sit and learn and have all their expenses covered by the Rebbe).

After marrying his wife Tamara, he was accepted as a rov in several White Russian towns. In 5636/1876, he then was sent by the Rebbe Maharash to become the Chassidishe rov in Moscow, where he served for 15 years, earning him the title, the “Moskver Rov.”

In Moscow, his fame as a great gaon and posek spread far and wide, throughout the Russian Empire and beyond. He was tasked by the children of the Tzemach Tzedek to organize the ksovim and to print the tshuvos of the Tzemach Tzedek. The responsa that we have is due to his hard work over a two-year period. He was greatly opposed to the maskilim who tried to make changes to the old Jewish way of life. As rov in Moscow he was called by the Rebbe Rashab to oversee the renovation of the mikveh in Lubavitch that fell into disrepair, after the Rebbe Maharash’s histalkus.

In 5651/1891, after upheavals in Russia and an attempt on the Czar’s life, a large portion of the Jews of Moscow was expelled, and Rav Vidrevitz decided to head towards the American shores. There he was appointed as rov of the Lubavitcher-Nyezhiner shul on Henry Street on the East Side of New York. Four years later, he was joined by the esteemed chossid Reb Avrohom Chaim Rosenbaum – who came to New York after writing to R. Chaim Yaakov and receiving a response that he will help him settle upon arrival.

In New York, his star began to shine even more and he accomplished much in the realm of strengthening Yiddishkeit in the “treifene medineh,” specifically in the areas of kashrus and mikvaos. He worked independently, as well as together with the “Rav Hakolel,” Harav Yakov Yosef, to bring order to a wilderness. His wit and genius were well-known throughout the land. Despite his speech impediment, people would come from near and far to hear his drashos and to have him mediate their disputes.

Due to his genius and wit, he became a well-known figure in the American-Yiddish press. A story was told that he once had a dispute with a business partner, where Rav Vidrevitz accused the partner of taking what wasn’t his. The partner, in his audacity, proceeded to accuse the Rov of stealing! The rov responded to his partner: “I’m a liar and you have a stuttering problem!” The partner was bewildered and responded: “You have a stuttering problem!” To which the rov replied: “Yes, but if you accuse me with your shortcomings, then I’ll accuse you with mine!”

While in the US, Rav Vidrevitz went by different titles at different times, including “Chief Rabbi of America” which was painted on a sign outside his home. When questioned who appointed him to be the Chief Rabbi, he answered in jest “The sign painter!”

His disagreement with the Agudas HoRabbonim might have been the cause for some people to suspect him of disrespecting the Rav Hakolel and that he was lax in Halacha. There was also another reason for opposition.

Rav Joseph was a talmid of Reb Yisroel Salanter and what you might call the leader of the Litvishe/misnagdishe yidden in New York. The misnagdishe yidden in New York put forth the idea that Rav Vidrevitz, the rov of the chassidim, was lacking in respect to Rav Yosef and to Yiddishkeit in general. They painted all the chassidim with a broad brush and claimed that all chassidim are at fault that, in the later years, Rav Yoseph’s rabbonus was fraught with problems. In truth, Rav Yoseph’s opponents were two prominent Litvishe rabbonim while Rav Vidrevitch stood by his side.

It’s worthwhile noting that after the passing of Rav Yakov Yoseph, Rav Vidrevitch was part of a committee that was actively trying to recruit Rav Yakov Dovid Wilowski of Slutsk – the Ridvaz – to be the replacement for Rav Yoseph.

Rav Vidrevitz also was very strongly opposed to a controversial rov who arrived in the US and settled in Hoboken, NJ – Rabbi Chaim Hirshenson. Rabbi Hirshenson saw the sorry situation of Yiddishkeit, and with good intentions, he prepared a sefer called “Halichos Olam,” to introduce the masses to leniencies in halacha. Rav Vidrevitz wrote many articles against him and his writings, that were published in a journal named “Hamitzpah.”

On the 12th of Iyar 5671/1911, after languishing in bed for eight days, he passed away. Thousands gathered for his levaya. The police, who knew from previous occasions of the large crowds that gather for the levaya of a prominent rov, made sure to keep tight control over the crowds. He was brought to kevurah to the Bayside Cemetery in Queens, right next to his son Yosef Tzvi, who predeceased him. A large matzeivoh was placed over both of their graves.

The Yiddish language Morgen-Journal had this to say about him after his passing: “He was one of the greatest geonim of his day. He fell ill eight days ago but remained in bed with seforim at his side – never ceasing to study Torah. He was great in Torah but also intelligent and well-versed in worldly matters Great industrialists and businessmen would come to him to seek his advice and to settle disputes they may have had.”

His own writings were never published, but his memory lives on in the writings of the Tzemach Tzedek that he compiled, as well as his scattered writings in various seforim and archives.