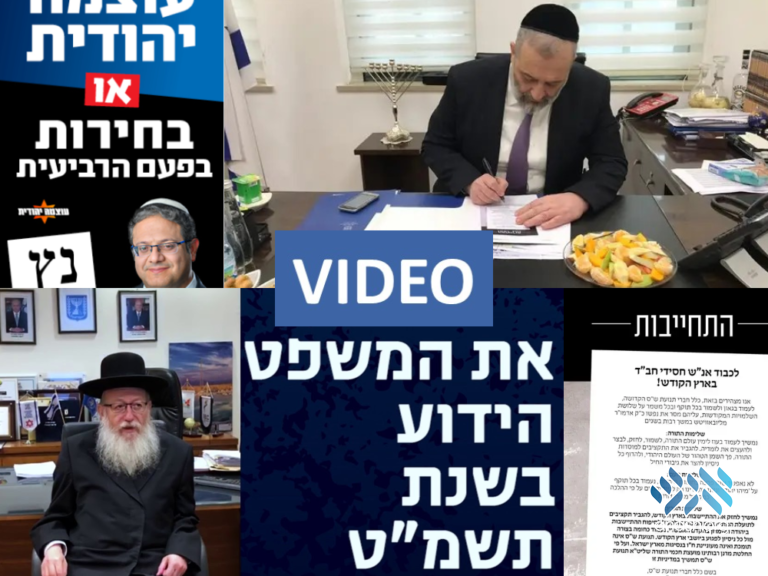 With less than a week to the third round of elections in Israel in one year, political parties are vying for the votes of Lubavitchers.

The third round of Israeli election within one year is less than one week away. While millions are preparing to vote yet again, political parties are jostling to get the Chabad vote, hoping to get enough Knesset seats to prevent a fourth election.

In numerous letters, the Rebbe wrote that anyone who has the ability has the absolute obligation to vote in Israeli elections, thereby granting more power to the frumme parties, and automatically preventing anti-religious laws. The question arises, for whom to vote?

In the Rebbe’s letter, he writes to vote for the “most charedi party.” However, the two main frumme parties, Agudas Yisroel and Shas, are far from having perfect track records. Neither on shleimus ha’am – preventing false conversions and immigration of non-Jews, and definitely not on shleimus ha’aretz – security of Eretz Yisroel and it’s inhabitants. Who then can be considered charedi?

In previous elections, large numbers of Chabad chassidim voted for smaller parties comprised of students of Meir Kahana hy”d. These parties vowed to fight against territorial compromises, as well as compromises to the Reform movement in areas such as Shabbos and the Kosel where others have turned a blind eye.

Time and time again, these parties failed to reach the electoral threshold, wasting tens of thousands of votes. This was just seen recently with the last election, where the Otzma Yehudit party was far from reaching the number of votes needed to enter the Knesset. Only a few months later, the lesson learned is still fresh in the minds of Lubavitchers, and many are reluctant to try again.

Additionally, the Beis Din Rabbonei Chabad put out a letter saying that voting for a party that may not pass the threshold is handing the votes to the anti-religious and left-wing parties.

Seeing the opportunity, the two parties of Agudas Yisroel and Shas have stepped up their campaign to receive the Chabad vote. Each is trying to gloss over the past and their support for questionable moves, and are promising to follow in the Rebbe’s path in shleimus hatorah, shleimus ha’am and shleimus ha’aretz. Both parties signed declarations to that effect as well.

Moving it up a notch the parties released campaign videos. The Shas video shows Chabad figures from Kfar Chabad and beyond saying that they will vote Shas, and thanking it’s chairman Rabbi Aryeh Deri. The campaign also published a full booklet called “Hashlemious”, detailing how they protected, and will continue to protect, what the Rebbe fought for, and their help to Shluchim and anash.

The campaign of Agudas Yisroel – Gimmel, also make similar promises. Flyers proclaim that they are the ‘most charedi right-wing party’ and promises abound. In a video produced for the campaign Rabbi Yaakov Litzman, Israel’s minister of health, he recalls the years where certain factions in Bnei Brak called for Chabad to be excommunicated and how he, and the Gerrer Chassidim, stood by Chabad.

Otzma Yehudit hasn’t given up either. In ads published on Chabad websites, they declare that without them the right-wing bloc will not have enough seats to build a government, leading to a fourth election.

The coming week will tell which, if any, of these campaigns were successful.